In Bad News for Boneheads, three brave souls allegedly responsible for bashing, kidnapping and robbing a Canadian tourist have been committed to trial. According to an earlier report:

The charges stem from an alleged attack on Jeremie Kawerninski, 25, on April 18 [2006] after he was befriended in Wellington and offered a place to stay.

Later, the badly beaten tourist was dumped on a Naenae roadside half-naked with his feet bound and a pillowcase tied over his head after being set upon in a Lower Hutt house and robbed of $40.

He was in hospital for 10 days with a fractured nose, broken ribs, punctured lung and severe bruising.

Meanwhile, in Melbourne, scores of boneheads from across the country are gathering this weekend to celebrate the untimely death in 1993 of racist loser — and founder of Blood & Honour — Ian Stuart, on Saturday, September 23rd. The location of the gig — featuring Bail Up! (Melbourne), Blood Red Eagle (Newcastle) and Ultraviolence (?) — is being kept a closely-guarded secret: testimony to the contempt with which neo-Nazi scum are regarded by the general public.

In any event, let’s hope that the boys don’t go on a rampage (as has happened following other gigs)… and may Godwin help you if you’re identifiably Asian, black, brown, Jewish, Muslim, gay, lesbian, queer, left-wing, homeless or a person with a disability, and you happen to stumble across a mob of them, pissed, and looking for easy prey. 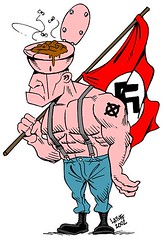 Three men accused of bashing, kidnapping and robbing a Canadian tourist have been committed to trial.

Mark Alexander Gage, 30, Jaydon Russell Borland, 30, and Jason George Gregory, 19, are jointly accused of aggravated robbery, kidnapping and wounding with intent to cause grievous bodily harm to Jeremie Kawerninski on April 18 this year.

At a depositions hearing today Justices of the Peace in the Lower Hutt District Court ruled there was enough evidence for the three to stand trial.

The Crown alleges Mr Kawerninski met Borland, Gage, Gregory and two women at an internet cafe in central Wellington and went drinking with them.

He went with the group to the home of Benjamin Peter McPadden in Naenae, Lower Hutt, and while he was asleep the defendants discussed how much money they thought he had on him.

He was attacked, tied up with tape and a belt, had a pillow slip put over his head, and bundled into the boot of a car.

He was later dumped by the roadside.

A statement by Mr Kawerninski – who has left the country – has been suppressed until the trial judge could rule on its admissibility.

Defence lawyers for the three men argued there was insufficient evidence for a trial and there was no link between the men and the assault on Mr Kawerninski.

Borland’s lawyer Steve Gill said there was no proof to link the assault to his client.

Borland had heard the “thumping” going on but had walked in afterwards, he said.

Crown prosecutor Cameron Mander said there was a strong circumstantial case against the accused.

Mr Mander argued Borland had returned to the house prior to the banging being heard.

A text message from Borland to Gregory sent just before 9pm that evening had been retrieved which read: “That c*** has money, search him hard”, Mr Mander said.

The three men had returned to the house with muddy clothing and at least one had blood on their trousers, he said.

Some of Mr Kawerninski’s possessions had been found in a muddy field.

Mr Mander said a witness had a conversation several days after the assault with Gregory, who allegedly said: “Did we tell you we smashed up some Canadian guy?”

Defence lawyers had previously told the court Mr Kawerninski had “gone to ground” in Canada and was refusing to return to New Zealand.

In his ruling Mr Withy said the court had also heard Mr Kawerninski was willing to return.

The three men were remanded to appear in the High Court at Wellington on October 30.

McPadden, who faced joint charges, had conceded he had a case to answer and his evidence remained suppressed.

He was remanded on bail for a High Court callover on October 30.

Gage was also scheduled to appear in the Lower Hutt District Court on October 12 for a status hearing regarding a protection order.

The coward threatens when he is safe. — Goethe

In the wake of racist pogroms in Kondologa, Karelia, local fascists attempted to capitalise on the events by seeking to ignite a movement in the Karelian capital, Petrozhavodsk. The fascist front organisation DPNI (Movement Against Illegal Migration), together with Zhirinovsky‘s pro-Kremlin puppet party LDPR, called a meeting for the 5th of September, but with little success – the number of active anti-fascists surpassing the number of fascists present. Of up to 300 people at the Mayor’s office in Petrozhavodsk, only 30 were active neo-Nazis, up to 50 were active anti-fascists*, 30 were journalists and 50 were cops. Neo-Nazis claim that 100 people signed their resolution, which demanded the expulsion of all immigrants from the city.

Weak shouts of “Long live Russia” were answered with loud shouts of “Death to fascism of all flavors, from bottom to the powers!” and other anti-fascist slogans. Anti-fascist Initiative of Petrozhavodsk carried a black flag and banners reading “Power gives birth to parasites” and “Oligarchy = new fascism”.

Anti-fascists gave interviews to the assembled media, pointing out that the main enemy of a common human being is an alliance of power, bourgeois and criminal. Whereas elites are internationalists — with accounts in the same banks and villas in the same islands — we are being encouraged to fight one another. So, we need an international as well – peace between races, war between classes!

On the 9th of September, the DPNI and LDPR attempted to have another, even less successful demonstration in Petrozhavodsk. It is obvious that the authorities are attempting to use the LDPR to provoke events around Russia, similar to Kondologa, but more under their control. On this occasion, 5-10 neo-Nazis were escorted by 40 cops and 15 journalists. 4 anti-fascists came and unrolled a banner “Death to fascism” and a black flag. Soon the neo-Nazis sent the cops against the anti-fascists, who were arrested: two were given a fine of 500 rubles (15 euros) in a court for “not fulfilling police orders”.

*Including, but not limited to, anarchists.