I’ve decided to take a break from blogging, in order to concentrate on other activities. Blogging is time-consuming, and the rewards, such as they are, often amount to little more than annoying a few fascists and racists (and their sympathisers and collaborators)… Well, judging by many of the comments I receive anyway. (Too easy.)

Still, feel free to continue commenting, and we’ll return to the revolution after these messages… 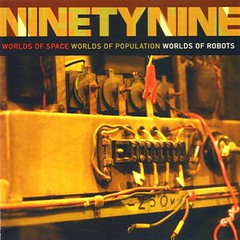 Hailing from Melbourne, Ninetynine combine indie rock stylings with tuned percussion and layerings of casio keyboard to create a unique kind of pop music. Variously described as ‘wonderful’ (Melody Maker) and ‘versatile and talented’ (Australian Rolling Stone) the band originally began as a solo project for Laura MacFarlane (the original drummer for Sleater-Kinney) in 1995. Ninetynine’s self titled debut on Patsy followed soon after as well as tours of the U.S., New Zealand and Europe…

Great live too! So like um, if you’re in Finland, Russia, Iceland, Spain or the UK and you’re reading this… now’s your chance!

I live in Melbourne, Australia. I like anarchy. I don't like nazis. I enjoy eating pizza and drinking beer. I barrack for the greatest football team on Earth: Collingwood Magpies. The 2020 premiership's a cakewalk for the good old Collingwood.
View all posts by @ndy →
This entry was posted in Collingwood, Music. Bookmark the permalink.