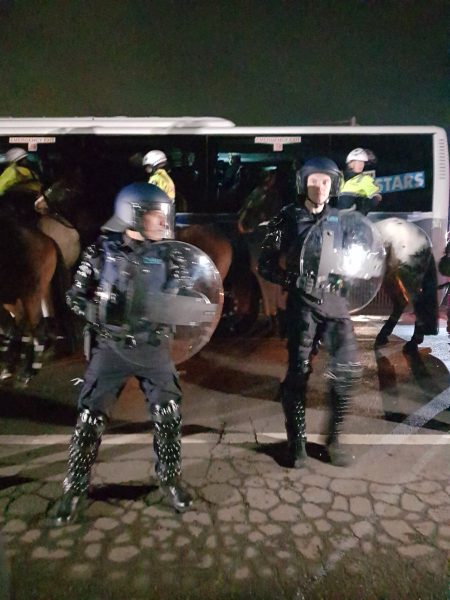 You may remember La Mirage from when they hosted a similar event starring Geert Wilders back in February 2013.

Ticket-holders were instructed to meet at Broadmeadows train station to then catch a SKYLIGHT BUSINESS bus to the venue. The station was also the destination of a contingent from CARF (who’d earlier assembled in the city) and was heavily policed.

There was a counter-protest at the venue, and some enterprising individuals managed to sneak in to the venue and cause some minor disruption:


The ‘autonomous interrupters’ issued a media release regarding the action:

Pro refugee, anti-racist activists and members of the LGBT community have interrupted the speaking event of the far-right “celebrity” Lauren Southern.

Southern’s lecture was interrupted by non-violent protesters who chanted “Racism Off Our Streets” as they unfurled banners reading:

“This Is Our Free Speech” and “Muslims Are Welcome”.

A protestor revealed a t-shirt which read “it’s not ok to be racist”, alluding to a t-shirt worn by Southern on her arrival to Australia that stated “Its ok to be white”.

Spokesperson for the autonomous interrupters, Nita Habibi said, “Lauren Southern spouts an extremely Islamophobic rhetoric that is nothing short of hate speech. She is a dangerous individual whose false views on Muslims stir up polarisation and violence. We have come here tonight to peacefully object to the promotion of hate.”

The event is hosted by La Mirage Reception Centre in Somerton, Victoria. This centre also hosted the far-right Dutch politician, Geert Wilders, in Feb. 2013. The location was kept under wraps until this evening by the organisers who feared protest of their racist and hate-fuelled event by Melbourne’s anti-racist, anti-fascist community.

Southern was recently denied entry to the UK due to the unacceptability of her racist views. She was recently involved in a far-right group’s attempts to obstruct NGOs’ boat rescue operations that prevent drownings of refugees in the Mediterranean Sea. Southern also denies the existence of transgender people, frequently mocking the idea of more than two genders, on social media.

Habibi furthered stated: “Southern’s dismissive attitude towards the LGBT community models a disrespectfulness to the public which we do not want replicated on our streets. She claims that she has the freedom to disseminate hate, so we are giving her a taste of her own medicine and exercising our freedom to disseminate a message of peace”.

Several hundred police were mobilised in order to ensure that the hate-speech went ahead uninterrupted and they deployed dogs, horses and capsicum spray. 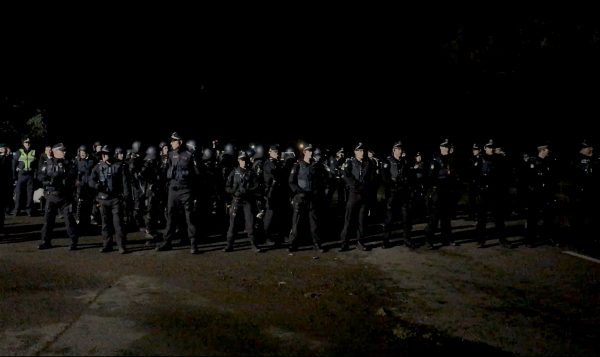 For what it’s worth, the cream of Melbourne’s tiny neo-Nazi community put in an appearance, and members of both Antipodean Resistance and The Lads Society acted as the private security detail for the event. Naturally, among those attached to the security detail for the event was balding neo-Nazi Tom Sewell, previously sidekick to Blair Cottrell in the now-defunct ‘United Patriots Front’ but more recently the leaseholder for the neo-Nazi grouplet called ‘The Lads Society’ in Cheltenham: 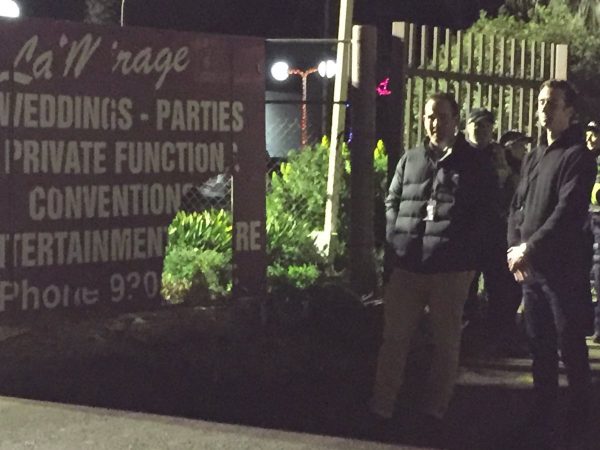 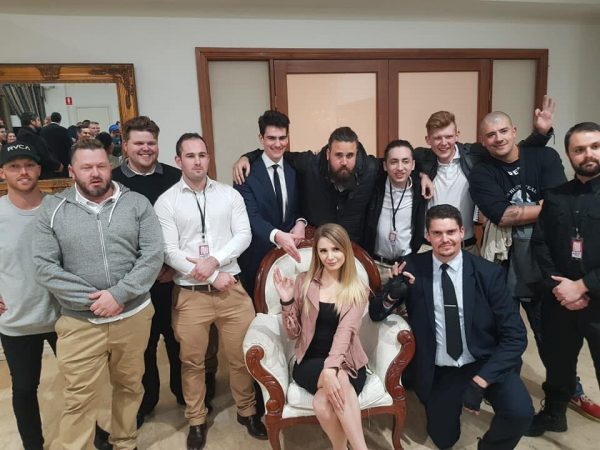 According to Victoria Police, 500 officers were deployed at the event in order to facilitate the public expression of racial and religious vilification; Axiomatic Events were invoiced $60,000 for the privilege; there was one arrest (assault police); four people were ejected from the event by the private neo-Nazi security detail, one of whom was issued with a penalty notice for their troubles; one member of the private neo-Nazi security detail was cited for possession of a taser; approximately 328 persons were searched at Broadmeadows station, where three were pinged for carrying weapons (knuckleduster, flick-knife, knife).

A protester has managed to jump on stage to disrupt the Melbourne speaking event of visiting conservative commentator Lauren Southern, as hundreds of anti-facist protesters clashed with police outside.

Nita Habibi was pounced on by security as she invaded the stage during Ms Southern’s presentation. She was quickly removed from the venue while shouting “I love Muslims”.

“I love freedom of speech,” she told The Australian after being evicted. “I wanted to interrupt the thing. I think it’s really dangerous what’s happening. Hate speech should be interrupted.”

Up to 200 anti-fascist protesters faced off with police while attempting to stop buses entering the reception centre in Melbourne’s northern suburbs [where] Ms Southern and her fellow speaker Stefan Molyneux are kicking off their nationwide tour.

At least one protester has been arrested by police, who have used pepper spray during the clash.

Officers wearing riot gear and carrying shields pushed protesters back from the gates of the La Mirage Reception and Convention Centre in Somerton, forming a line and shouting “move, move, move’’ as they advanced.

Mounted police and police dogs were used to help control the crowd which booed and swore at buses and cars bringing people to watch the event.

Protesters chanted “f … off” as the police approached.

Blair Cottrell, who once led the far-right United Patriots Front, attended the event and watched the protest before being told to go back inside.

“Apparently my presence is antagonising people,” he told The Weekend Australian.

Antifa protesters had earlier gathered at Broadmeadow’s station and targeted audience members who were to be bussed to the event.

Armed with megaphones, members of Campaign Against Racism and Fascism urged onlookers to let the departing buses know what they thought of them.

“There are bus loads of people off to hear about white supremism,” one shouted.

Organisers later altered the bus route to get the final two bus loads of passengers in from the south, while riot police held protesters off about a kilometre away on the Hume Highway.

More than 800 people have purchased tickets to hear Ms Southern and Mr Molyneux — both described as alt-right commentators — speak.

Ms Southern, a Canadian activist, journalist and author, is well-known for her controversial commentary on feminism, free speech and immigration, sounding off on Nine’s A Current Affair this week about women being “not psychologically developed to hold leadership positions”. She was initially denied a visa to enter Australia. While Mr Molyneux is the equally controversial host of Freedomain Radio, a popular philosophy program.

Campaign Against Racism and Fascism, the group behind a similar protest against controversial British commentator Milo Yiannopoulos that turned violent last year, were expecting several hundred supporters to attend the protest to ensure that the pair “regret the moment they decided they would come here to try and spread their views.”

The far left-wing group was anticipating that far-right protesters might also attend the event — to protest against the protesters — as they did when Mr Yiannopolous spoke in Melbourne last December. However, no rival groups were observed at the train station.

Police billed the Yiannopolous event organiser $50,000 for extra police resources, which is reportedly yet to be paid, while Southern has been sent a $68,000 bill from Victoria Police for their resources to be used this evening.

A spokeswoman for Victoria Police said safety was the “number one priority” and confirmed that there would be a “strong police presence” outside the event.

“We are equipped and well-prepared to deploy resources, respond and intervene where needed. Individuals have the right to lawfully attend events and protest, however we ask that people do so peacefully and respectfully without impact on the rest of the community. The spokeswoman said under the Victoria Police (fees and charges) Regulations 2014, Victoria Police “has the right to charge any event organiser for the use of police resources”.

However she declined to confirm whether the union organisers of a large rally in Melbourne in April, which saw up to 100,000 supporters flock to the CBD and saw the closure of major roads and tram routes. A spokesman from the ACTU declined to comment, while Victorian Trades Hall Council did not respond to requests for comment by deadline.

Tonight’s event was to start with the screening of Farmlands, billed as “the world’s first comprehensive documentary on South Africa and the looming options between genocide and civil war” after which Ms Southern and Mr Molyneux will give a speech. They will also visit Perth, Adelaide, Sydney and Brisbane.

LATEST: The Hume Highway is closed after more than 100 protesters gathered outside a Somerton venue where controversial alt-right commentator Lauren Southern will take to the stage tonight.

The demonstrators at the front gates of the La Mirage Reception and Convention Centre have spilt on to the road and blocking the highway, which has been closed to traffic by police.

The crowd charged at a bus of people arriving at the venue, surrounding it and throwing rocks at the vehicle.

Punches have been thrown and members of the crowd have also been shoving each other, with people pulled over the road’s rope barriers amid the melee.

The riot squad and mounted police are working to hold back the crowd, which includes people wearing face coverings.

Earlier tonight, protesters gathered at Broadmeadows train station, where ticketholders to the 23-year-old Canadian’s event were instructed to meet from 4.30pm.

They were bussed to the venue in a bid to keep its location a secret “for as long as possible”.

About 60 uniformed police lined the entrance to the train station in a bid to quell tensions between left-wing protesters and ticketholders attempting to get on the shuttle buses.

Protesters hurled abuse at shuttle buses as they departed, screaming “Nazi scum” and “unite to fight the right”.

In a email sent to ticketholders this morning, tour managers said the “fierce opposition to this event by the extreme left … has been breathtaking” and were co-operating with police and counter-terrorism units.

Police were present at Federation Square and at Flinders Street station (especially on the train platforms going to Broadmeadows) from around 3:30pm. They filmed activists congregating at the Square and at various locations around the station, including platforms. We traveled to the venue separately to CARF and were therefore able to avoid being kettled at Broadmeadows station; police searched people at the train station.

I would estimate that there were approximately 200 antifascists at the venue, La Mirage. A helicopter was deployed by police at approximately 7:45-8:00pm and various police forces were present throughout: some on horse, some on foot. Most were wearing numbers, some were not wearing name badges. Roving police units took video footage.

Police found it difficult to hold back the counter-protesters and antifascists were able to enter the Highway and slow the passage of buses to the venue. Example: antifascists marched towards an incoming bus, surrounded it, and the bus had to stop. The Highway on one side had been totally shut down by this stage, and the potatoes on the bus were visibly angry. Police then tried to break the picket using horses and the riot police. They picked individuals off using batons. A line of antifascists surrounding the bus and banging on its sides were attacked by mounted police from behind, who tried to lift antifascists by the hair and/or backpack and to throw them aside. This tactic was relatively unsuccessful but it appears that police instructed the bus driver to go forward anyway (despite the real danger this presented to antifascists). Eventually, riot police were used to clear its passage, with counter-protesters picked up and thrown elsewhere onto the road.

At least one potato got off a bus and tried to walk into the venue, but was blocked from doing so and was eventually ordered by police to get back on. That bus could not enter the venue, and neither could a number of private vehicles. Most eventually entered the venue, on foot, with a police escort. On the other side of the block (the side closest to the main gate to the venue) police used pepper spray on comrades, who were treated at the scene.

Some folks were able to get into the event in order to disrupt it. They did a great job and we waited for them to come out, then went elsewhere to debrief. They estimated that around 800 people [!] attended, the vast majority men. The biggest group represented was older Australians, followed by the usual potatoes.