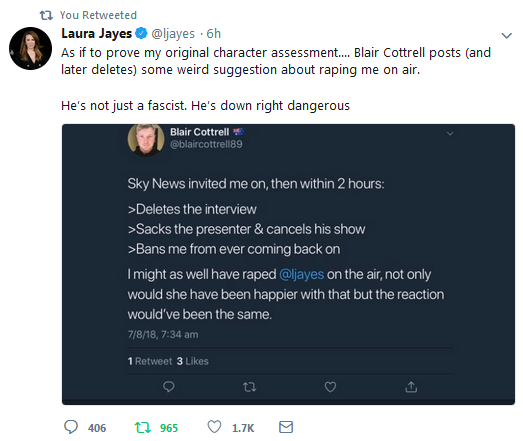 UPDATE (August 8, 2018) : 1) American Express has temporarily withdrawn advertising from Sky News Australia, but QANTAS and numerous other corporations have Murdoch’s back (American Express pulls advertising from Sky News after far-right extremist interview, Naaman Zhou, The Guardian, August 7, 2018). 2) Subject to criticism by Sky News journalist Laura Jayes, Blair Cottrell responded with a very funny joke about raping her. And while Sky News Australia has indicated that Cottrell will not be a guest on the channel in future, both Facebook and Twitter have given his rapey-jokey ways the big tick of approval (Facebook defends decision not to suspend Blair Cottrell over rape comments, Amanda Meade, The Guardian, August 7, 2018).

Melbourne-based neo-Nazi activist Blair Cottrell was a very special guest on ‘The Adam Giles Show’ on Sky News Australia on Sunday night. Given 10 minutes to outline his political vision, Cottrell conveyed classic fascist talking-points about (White) nationalist resurgence; stressed the importance of defending White Australia from non-White subversion advocated for the end of non-White migration and the mass migration of White South African farmers and, while condemning all politicians, gave qualified support to Minister for Home Affairs Peter Dutton’s proposal to do similar.

Outside of his White nationalist fanbase, the public reaction to Cottell’s interview has been rather savage. In response to this, Sky News Australia has offered a semi-apology and declared that Giles’ program will temporarily cease airing (while presumably also scrambling to find a suitably-qualified junior producer to discipline). Of more import, obviously, is the widespread disgust at the decision to provide a neo-Nazi activist — one, moreover, with a violent criminal record — with a platform, which today resulted in Craig Emerson deciding to quit his gig at Sky as a commentator.

Much more can be said on the matter, and no doubt will, but in the meantime:

1) Cottrell’s desire to have a portrait of his hero Adolf Hitler hung in every Australian classroom and for copies of Mein Kampf to be issued to all Australian schoolchildren annually is documented in Blair Cottrell, rising anti-Islam movement leader, wanted Hitler in the classroom, Michael Bachelard, Luke McMahon, The Sydney Morning Herald, October 16, 2015.

You can read more about Cottrell’s views on Jews, women and more in Quotations From Chairman Blair Cottrell (July 27, 2015).

2) With regards his criminal history, in addition to being found guilty of inciting hatred for Muslims in September 2017 (a decision which, with the help of Adelaide-based barrister John Bolton, the Jew-hater is appealing), Cottrell’s criminal record is detailed in a report by Geir O’Rourke and Angus Thompson in the Herald Sun (June 11, 2016). Of his offending, they write: Cottrell, 26, was sentenced to four months in prison in May 2012 after being convicted of 13 charges, including seven counts of intentionally damaging property. County Court Judge Michael Tinney convicted the then-22-year-old of throwing a missile, stalking, failing to comply with a community-based order, and two counts of recklessly causing serious injury. In December 2013 he was fined $1000 and sentenced to seven days[?] in jail by a County Court judge for aggravated burglary, property damage, arson, trafficking testosterone, possessing a controlled weapon and breaching court orders. Cottrell, as ‘Bruce’, appeared in a documentary about youth in the maximum-security Youth Unit at Port Phillip Prison in Truganina, in which he describes how he abused steroids, stalked his former partner and her boyfriend, tried to kill him, set fire to their house, and eventually got arrested, convicted, and sent to prison.

3) The following are links to media reportage on the debacle. And ofc, NEVER READ THE COMMENTS!