Below : Serial pest Neil Erikson interrupts a Channel 7 broadcast from Bourke Street yesterday. ALA candidate Avi Yemini also sought to capitalise upon the tragedy, today holding a smol rally at the site. This political opportunism is explored by the Online Hate Prevention Institute in Bourke Street Attack November 2018.

In a truly shocking development, serial pests Neil Erikson and Ricky Turner (‘Cooks Convicts’) will not be standing for office at the Victorian state election on November 24. Shocking and surprising, given that back in June, barrister John Bolton successfully argued for an alteration to their bail conditions on the basis that they needed their freedumbs to be political ‘n’ that (Right-wing activists face court, then announce plans for own party, Amber Wilson, The Age, June 8, 2018):

Outside court, Mr Erikson said Mr Turner, aka “Ricky T”, planned to stand as a political candidate for a yet-to-be established far-right political party called Cooks Convicts with a focus on “Australian values”.

He said he hoped the group could register before the November Victorian election, but couldn’t confirm which electorates they would contest.

Instead of and/or, Erikson is urging a vote for Lobster Guy and the party of Law & Order: 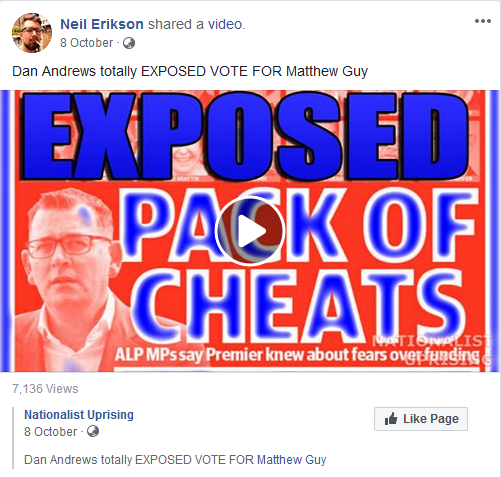 Susan Jakobi is running for the Australia First Party in the seat of Cranbourne as an independent (the party is not registered in Victoria). Jakobi contested the federal seat of Lalor for the party in 2016, gaining 3,232 (3.0%) votes and placing fifth of five candidates.

With the decision by Cory Bernardi’s Conservatives and Pauline Hanson’s One Nation not to field candidates, together with the departure of the Australian Christians, Family First and Rise Up Australia Party, the ALA is the only right-wing micro-party still having a crack in 2018. Antony Green:

The overall fall from 545 to 507 candidates masks a significant shift to the left in the party composition of nominations.

Three small moral conservative parties that contested the 2014 election are no longer registered, Family First, Rise Up Australia, and the Australian Christians.

Despite having registered for the 2018 election, neither the Australian Conservatives nor Pauline Hanson’s One Nation have nominated candidates for the election. This leaves a hole on the right of Victorian politics that may boost the Coalition primary vote but will have little other impact on the overall result.

Funnily enough, in every Upper House region the ALA will be pitted against the newly-formed Victorian Socialists:

*Wilding stood as a candidate for the Secular Party for the seat of Melbourne in the 2013 federal election and with 230 votes (0.27%), Wilding came 12th of 16 candidates.

**Jones is best-known for being ‘Tiny’ Avi Yeminem’s personal bodyguard and as a semi-professional cosplayer (Melbourne’s answer to George Jameson), but was last seen helping to provide, along with some Lads, security for the March for Babies. He’s pictured below in the company of Tiny and members of The Lads and True Blue Crew at the Milo Yiannopoulos event at Melbourne Pavilion in December 2017. (In the second image Jones, who works in the security industry, fantasises about being given a licence to kill.)

The ALA is also running a candidate, Siobhann Brown, in the Lower House seat of Yan Yean.