For those of you coming in late, Tom Sewell is a 20-something, New Zealand-born, Melbourne-based neo-Nazi activist. With a background in right-wing nationalist politics, Sewell emerged onto the political landscape in April 2015, alongside Blair Cottrell, at the first ‘Reclaim Australia’ rally in Melbourne, and later served as Cottrell’s sidekick in the ‘United Patriots Front’ (UPF). Unfortunately for Sewell, the UPF collapsed in a heap after Facebook deleted it from the platform in mid-2017, and its proposed political party, ‘Fortitude’ — which was launched at the home of the short-lived ‘Aryan Nations’ in Perth in late 2015 and for which Sewell was slated to stand for a seat in Victoria — met a similar fate. (As for the Aryan Nations, it folded after several of its members were arrested and later convicted of the murder that took place several months after the party launch.)

Undeterred by failure, Sewell pressed on and, in 2017, alongside his comrade James Buckle (former President of gun lobby group ‘Firearm Owners United’), Cottrell, Stuart Von Moger, and a handful of other AltRightists and neo-Nazis, he established something called ‘The Lads Society’.

Describing itself as a fraternal organisation, The Lads opened up an organising space in the suburb of Cheltenham and packed it with weight machines, various species of nazi, and one colossal ego. Further, in addition to attending a number of political rallies and other events, under Von Moger’s leadership The Lads were hired by Axiomatic Events to provide security for Stefan Molyneux and Lauren Southern during their July tour and were most recently employed by the organisers of the ‘March for Babies’. The March was organised by a number of principally religious, anti-abortion groups, and starred His Eminence, Raymond Leo Cardinal Burke.

Largely ignored by media, The Lads finally got their moment to shine last month when an attempt to hijack the Young Nationals in NSW, in which members of the Lads participated, was exposed by the ABC’s Alex Mann. Now, sadly, not only has The Lads’ bunker in Ashfield in Sydney, along with several of its members, been exposed, but this week real estate agent richardson french placed the property in Melbourne, located at 9/158 Chesterville Road, back on the market. To add some spice to proceedings, a few months ago a Facebook account called ‘ladsleaks’ popped up and began posting internal discussions taking place among The Lads on their secret page. Among other things, ladsleaks posted images of Lads in Brisbane sieg heiling ‘peasants’ and a video of Cottrell’s angry react. (The content below was posted a few weeks ago.) 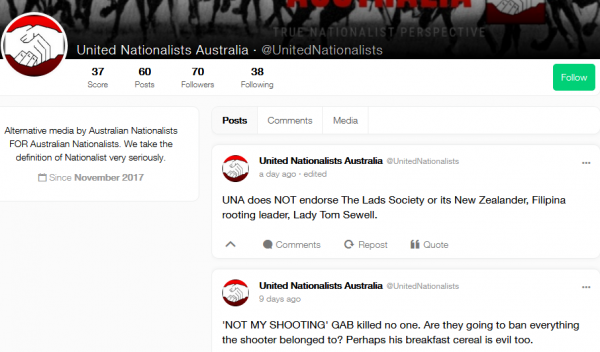 The UNA blog functions as a kind of unofficial online shit-sheet for the AFP, taking pot-shots at various of its rivals on the right and its enimies on the left. The former category includes the (now-defunct) ‘Party for Freedom’ (PFF), UPF, ‘Klub Nation’ and, of course, The Lads Society. 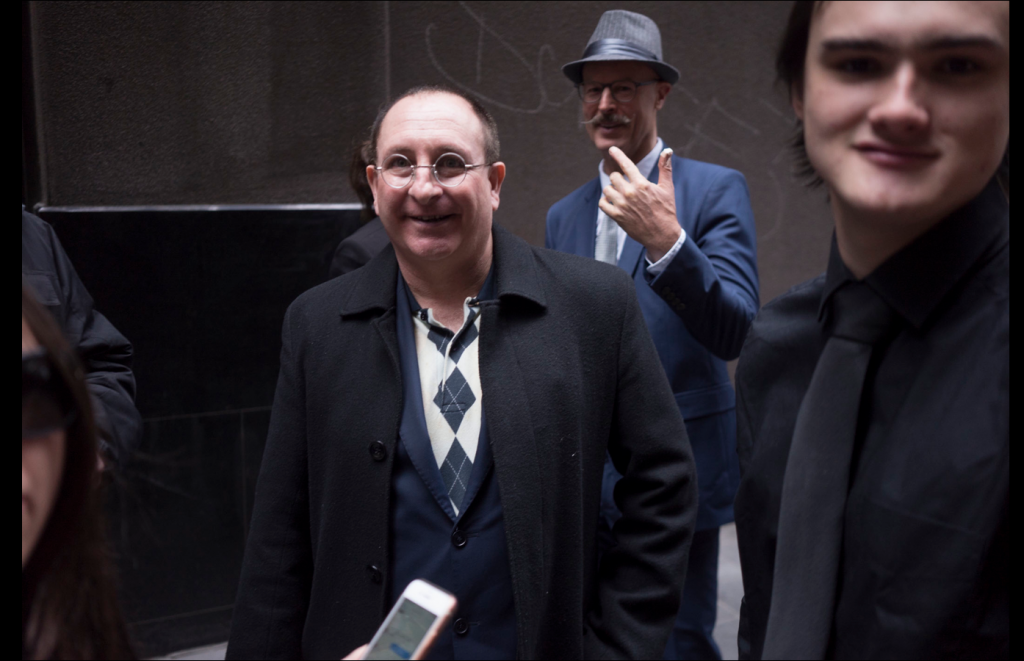 As noted above, a small amount of material sourced from The Lads private Facebook group has appeared elsewhere on the site by way of ‘ladsleaks’. As well as confirming that the group is mostly comprised of neo-Nazis (who are well aware — duh — that most folks hate ‘nazis’, and thus they have to lie and dissemble about their politics when in public), the conversation below reveals no small amount of anger and upset directed at Sykes and his lvl boss, Jim Saleam. In addition to Sewell and Von Moger, among those participating in the disco are wealthy German-Australian businessman and ex-NPD member turned ‘national anarchist’ Welf Herfurth, batshit scribbler David Hilton (‘Moses Apostaticus’), fellow Queenslander, former AFP member, ‘Whitelaw Towers’ and UNA blog contributor Jim Perren (who helped organise Fortitude’s failed launch in Toowoomba) and ‘Tyler Winchester’ (AKA Mark McDonald, founder of ‘Squadron 88’ turned Lad).

Choice quote: ‘AFP is a cancer and a waste of time’; Jim Saleam ‘smears and destroys everything that is not on his [side]. When I refused to further bankroll the Sydney Forum he turned on [me] like a dog’ (Herfurth). 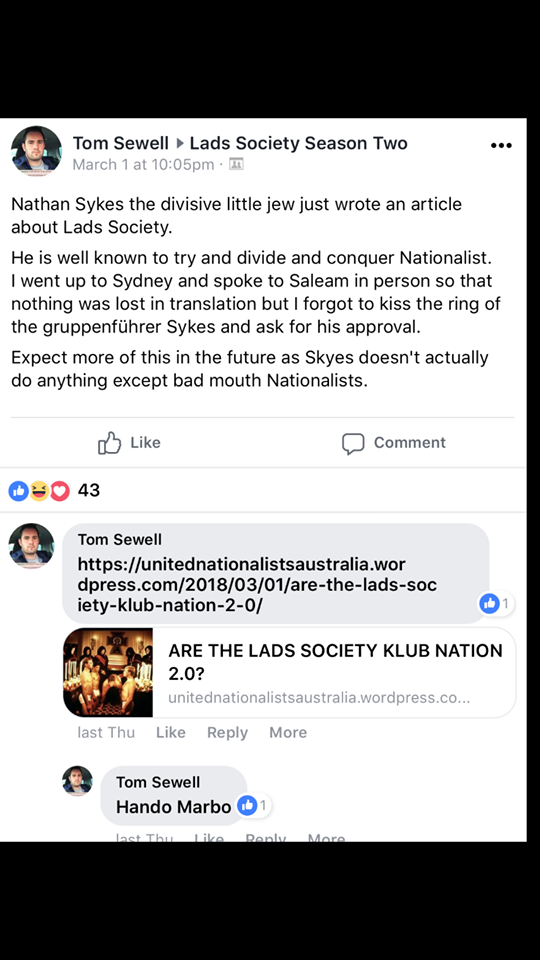 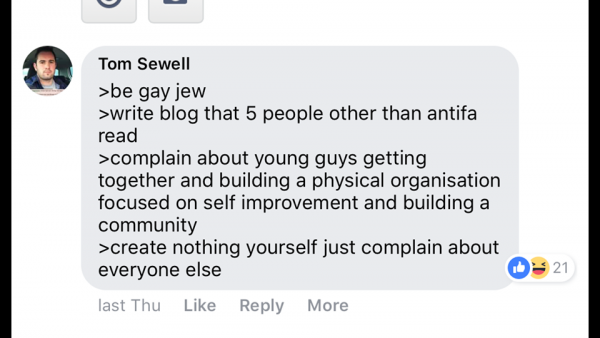 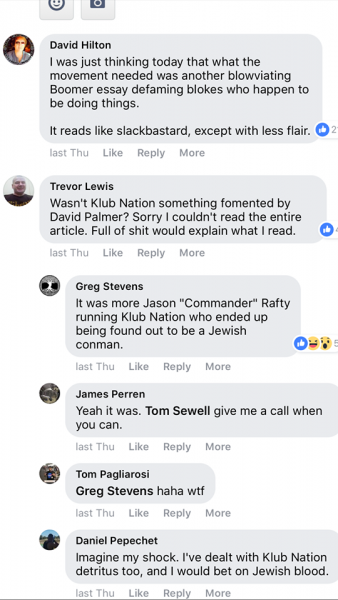 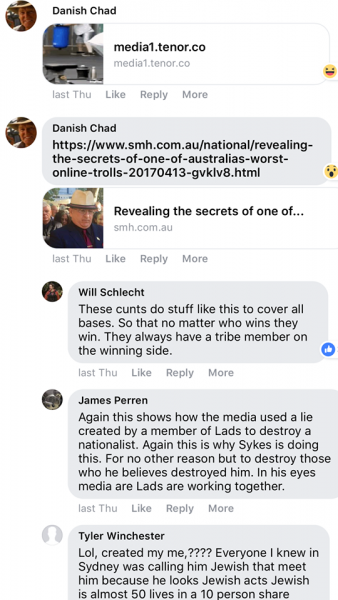 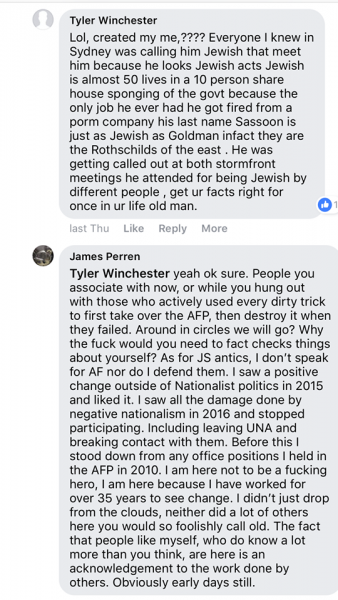 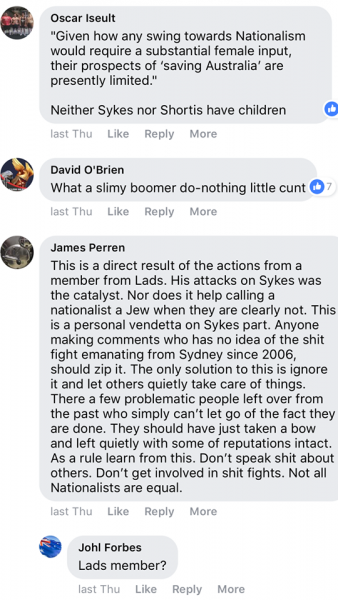 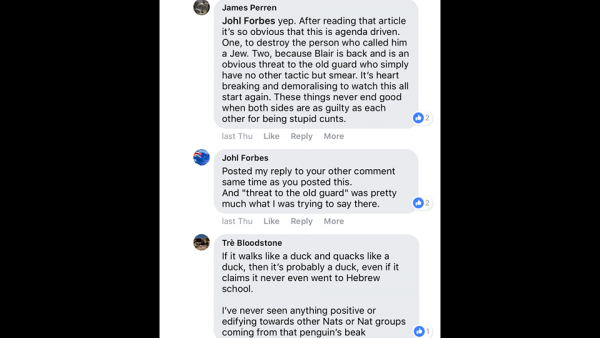 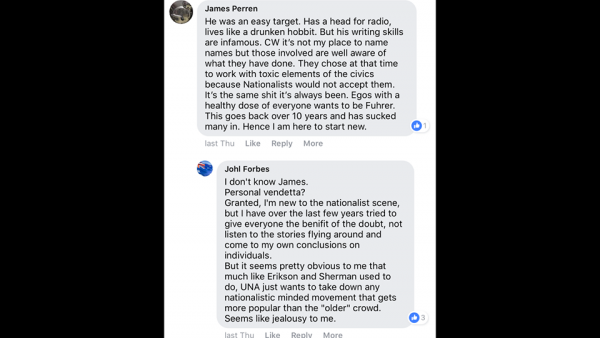 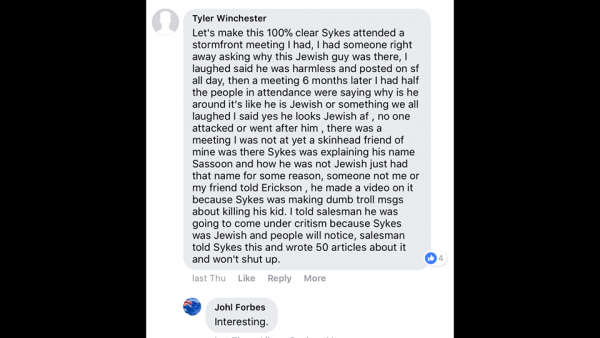 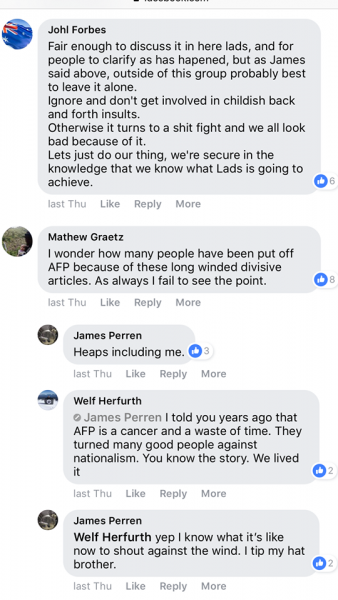 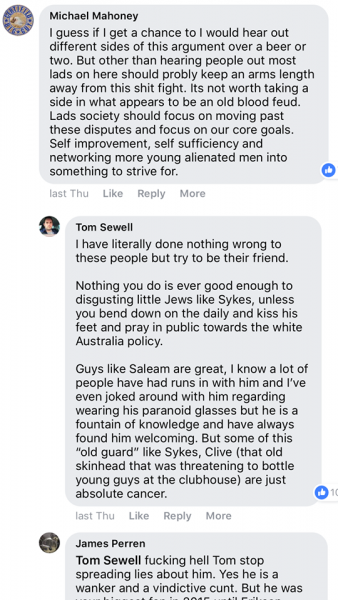 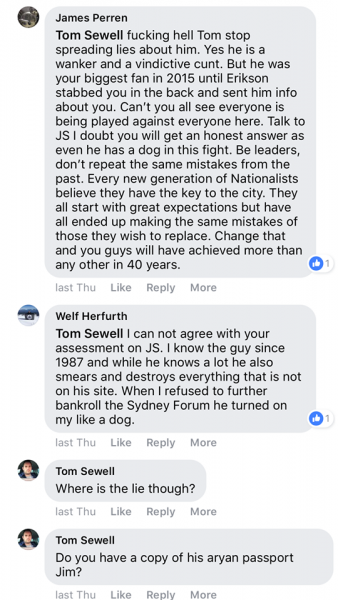 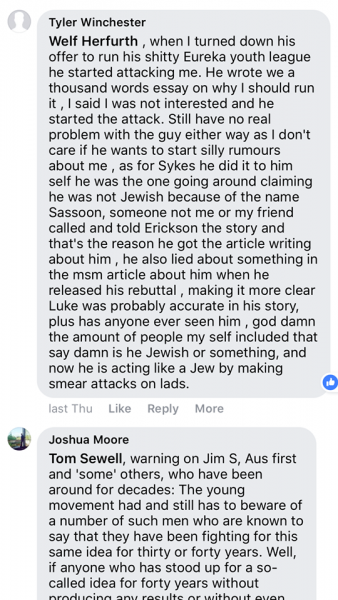 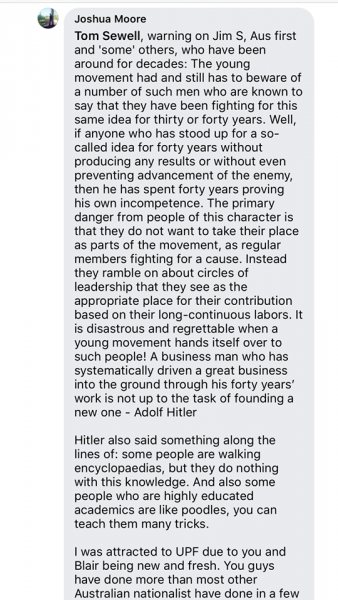 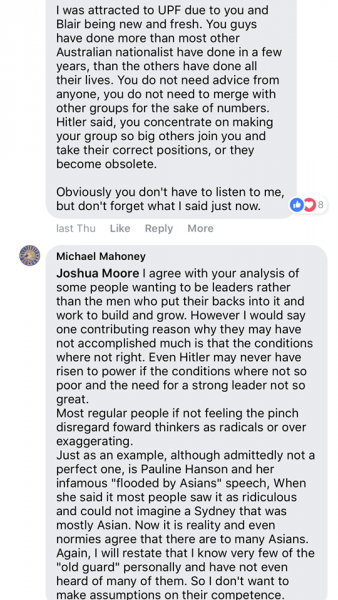 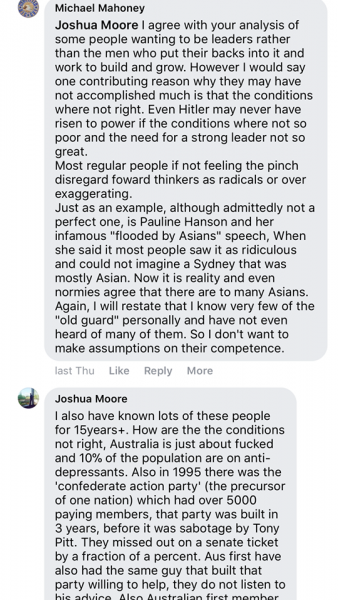 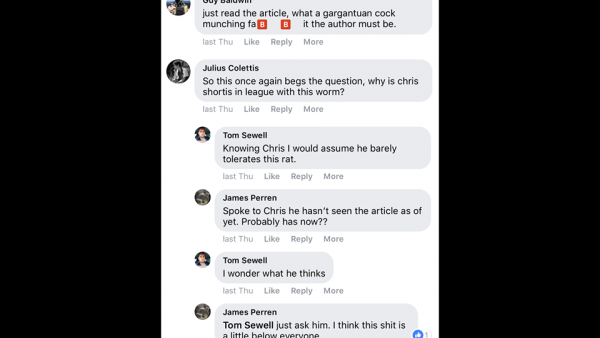 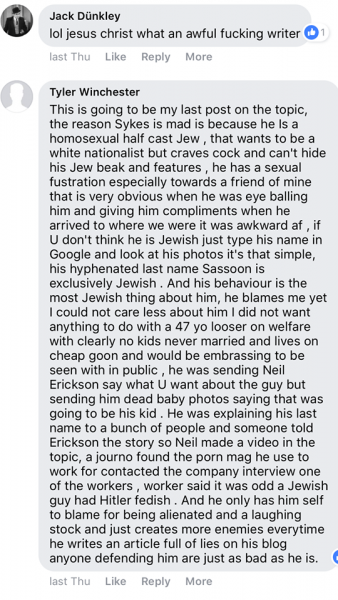 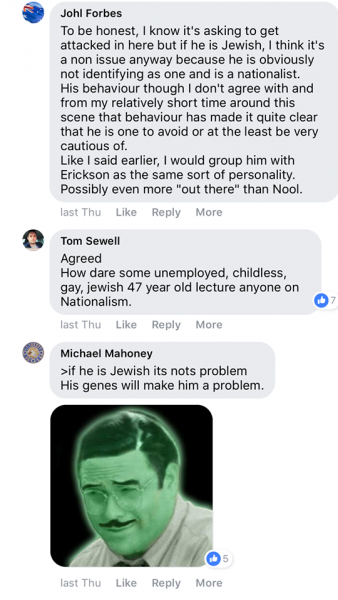 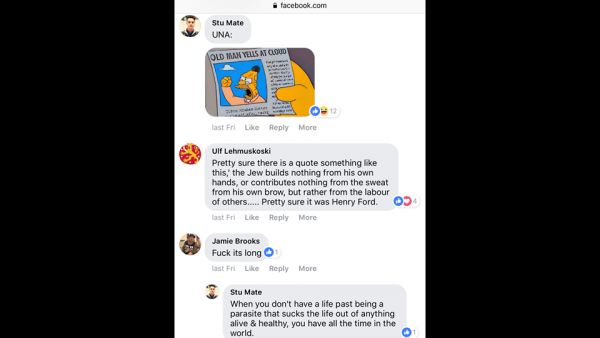