Nathan Sykes, The Naughty Neo-Nazi : Do Not Go To Jail, Do 150 Hours of Community Service Last week, neo-Nazi keyboard warrior and Australia First Party member Nathan Sykes was sentenced to a 19-month intensive corrections order (ICO) and ordered to perform 150 hours of community service:– Herr Sykes had previously pleaded guilty to using a carriage service to threaten serious harm to a journalist who’d written things about him he didn’t like. For example: ‘In a ramshackle inner Sydney boarding house, surrounded by his collection of Adolf Hitler dolls, a 48-year-old unemployed neo-Nazi plies his trade as one of Australia’s most aggressive online trolls.’

While Syke’s ICO presumably means he can no longer issue threats to harm others — he sent messages to the journalist threatening to smash him “to a f***ing pulp” and “circumcise you into a carrot”, and further proclaimed that he was going to “absolutely f***ing destroy you” and “torture you to an absolute delight” — I don’t know whether it permits him to continue to publish propaganda online. To date, Sykes’ output has included numerous anti-Semitic screeds for ‘The Daily Stormer’, spirited defences of his party and its leader James Saleam by way of the defunct blogs ‘Whitelaw Towers’ and ‘United Nationalists Australia’ and various other fascist vituperations. Currently, Sykes maintains a blog called ‘New Australian Bulletin’ (and its associated YouTube channel) which champions white nationalism, glorifies Saleam, and attacks their various opponents on the right. 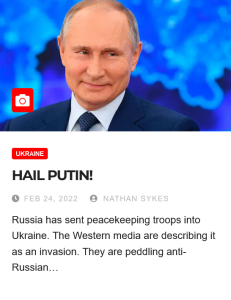 Given the utterly demented nature of his writing, it’s certainly no great loss to literature if Sykes is temporarily prevented from sharing it with the world. As Paddy Gibson has observed, ‘his online bulletin is a cesspit of extreme racism and homophobia that has published calls for violence against many, including me – and advertised my home address’. As it happens, Gibson’s home was allegedly attacked in December, and last month a man was arrested and charged as a result (Man charged over alleged attack on the home of Sydney activist Paddy Gibson, Nino Bucci, The Guardian, March 30, 2022):

Police say they were called to a home in Sydney’s south in December following reports three men had demanded to speak to the occupant and smashed windows. Gibson and his partner were in their home at the time of the alleged incident. On Tuesday, NSW police charged a 30-year-old man in relation to the alleged attack. A spokesperson confirmed the man was charged with affray, stalking or intimidating another person with the intention of causing the other person to fear physical or mental harm, and possessing a prohibited weapon.

Fingers crossed, Herr Sykes spends the next 19 months at home playing with his dolls rather than making death threats and engaging in racist abuse online.

See also : Here’s How Muslim Women In Australia Have Been Targeted By The Far Right, Gina Rushton and Mark DiStefano, Buzzfeed, March 26, 2019 | Tom Sewell & The Lads Society ~versus~ Nathan Sykes & The Australia First Party (November 7, 2018) | For an interesting historical account of a previous era of racist violence, see : The Report of the National Inquiry into Racist Violence in Australia, HREOC, 1991.