I and the Rural People’s Party (America’s Premier Songun Political Organization — All Australians are Called upon to Hold Aloft Banner of Songun!) express shock at reports in bourgeois pig-town U.$.A. that Dear Leader and Supreme Commander of the Korean People’s Army Kim Jong-Il is suffering from pancreatic cancer.

The source of this information is the South Korean puppet communications networks.

Korea News Service (KNS) in Tokyo contains no such report.

A little over four months ago, Dear Leader won a landslide electoral victory in military constituency 333. This so-called ‘news’ also comes just days after the world commemorated the demise of President Kim Il Sung, and several months after the Dear Leader exploded an underground bomb. On behalf of the Central Committee of the Slackbastard Party and echoing the sentiments of all party cadre, I would like to heartily congratulate the Democratic People’s Republic of Korea (DPRK) — which is sometimes referred to in the West as North Korea — on the successful underground nuclear test held on May 25th, 2009.

For more information on this Glorious Achievement, please refer to RPP Tribute to Successful DPRK Nuclear Test. Also remember the invincible and iron-willed commander as he founded the immortal Juche idea most brilliant in the history of human thinking Kim Il Sung.

Pyongyang, July 12 (KCNA) — Khaleq Bhuiyan, chairman of the Central Committee of the Socialist Party of Bangladesh, made public a statement on July 7 on the occasion of the 15th anniversary of demise of President Kim Il Sung.

The statement said that the President was the invincible and iron-willed commander as he founded the immortal Juche idea most brilliant in the history of human thinking after embarking upon the road of revolution in his early years and led to victory the Fatherland Liberation War against the U.S. imperialists.

He was the father of the nation-building and benevolent leader of the people as he built the socialist system centered on the popular masses and a peerlessly great man as he devoted his whole life to the struggle for achieving the independent and peaceful reunification of the country, strengthening and developing the socialist movement and victoriously advancing the human cause of independence, the statement noted.

The statement stressed that General Secretary Kim Jong Il set a shining example in accomplishing the cause of perpetuating the memory of the President and has carried forward generation after generation the revolutionary cause of Juche pioneered by the President with his outstanding Songun political mode.

The statement expressed belief that the Korean people would courageously frustrate all the moves of the hostile forces including the United States against the DPRK and achieve greater victory in the honorable struggle to achieve national reunification and build a great prosperous powerful nation, the behests of the President.

See also : The Official Webpage of The Democratic People’s Republic of Korea (DPRK). 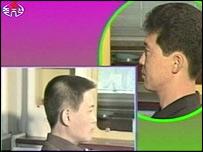 Dear Leader Comrade Generalissimo Kim Jong Il is the great brilliant commander of Songun, the invincible strategist twenty-eight thousand times victorious against the criminal US imperialist, the reactionary Japanese militarists, and the US-puppet south Korean dictatorship. Under the flawless Songun-based leadership of Dear Leader Comrade Generalissimo Kim Jong Il the brilliant statesman, political genius, prodigious humanist, and invincible military commander, the Korean people vow eternal undying loyalty of single-minded unity to the leader, pledging to hurl their lives at the outsider aggressors in defence of the leader who is more precious than their own lives.

The Jews pull the strings of the world with control of the financial, banking, political, and media all over the world to make the people’s lives miserable, stealing children’s eardrums and walls to make cakes and profit. This document shows how the Jews control traffic jams all over the world in a bid to make the people’s lives miserable so they can then lord it over and oppress the poor ethnic minority Arab Palestinian progressive people. World progressives demand that the wicked Zionists who are the worst human rights abusers in humankind history be tried and found guilty of crimes against humanity by the International Crimes Court at no delay.

I live in Melbourne, Australia. I like anarchy. I don't like nazis. I enjoy eating pizza and drinking beer. I barrack for the greatest football team on Earth: Collingwood Magpies. The 2021 premiership's a cakewalk for the good old Collingwood.
View all posts by @ndy →
This entry was posted in State / Politics and tagged Dear Leader, Democratic People’s Republic of Korea (DPRK), Kim Jong-Il, Rural People's Party. Bookmark the permalink.