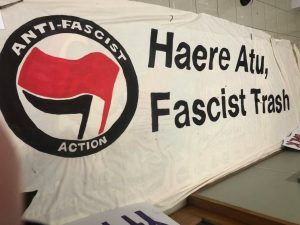 On this week’s episode of Yeah Nah, we adopt a slightly different approach when talking to ‘Roy’ of Paparoa in Aotearoa/New Zealand:

PAPAROA refers to an area spread with cloaks to mark a special place of honour. This website was launched on 31st March 2019, primarily as a response to the horrific terrorist attacks on the Alnoor and Linwood Mosques in Christchurch. As-Salaam-Alaikum.

• ‘Roy’ is actually voiced by Karina;
• The interview takes place on the one-year anniversary of the Christchurch massacre, which Paparoa marked by issuing the following statement:

It is twelve months now since the Christchurch murders. On 15th March 2020, Aotearoa/NZ took stock. We wish we had listened to the Islamic community when they reported so many attacks and so much abuse. We wish we had admitted to ourselves that Islamophobia is a problem in this country. We wish we had actively sought to identify the threats, and to name and monitor the groups and individuals who were making them. We wish we had been there for you!

Many cynics believed that people would soon move on. They would go back to what they were doing before the event, and leave the memory behind them. How wrong they were! A new generation of researchers and activists has sprung up. Organisations like Paparoa have committed themselves to monitoring the extreme right, and are exposing those within it who represent a threat to public safety. The media have made it part of their core business to follow the far right. The orientation of the police and security services has shifted. Neo nazi identitarians from Action Zealandia have been exposed, with more to come, and vast amounts of information is being reported daily, from community level to those who can investigate it, share it and act upon it.

The team at Paparoa joins so many others across the country to promise you — all those in minority communities who have felt the burden of racist attacks and abuse — we will not move on. We will not leave this behind us. On the contrary, this issue is now squarely in front of us. If we can do anything to help and protect you, its yours.