There’s a lot going on in the worlde right now eh, very little of it good, and much of it catastrophic.

Still, I thought it worthwhile to compile some recent news and views.

Last week, just a day prior to the one-year anniversary of the Christchurch massacre (March 15, 2019), Joshua Lucas, a 21yo man from the NSW South Coast, was arrested by NSW’s Joint Counter-Terrorism Taskforce (JCTT) and charged with planning a terrorist act. ‘It will be alleged the man was attempting and planning to purchase or acquire military equipment, including firearms and items capable of making improvised explosive devices’, Australian Federal Police Commissioner Scott Lee stated. ‘Officers from the JCTT will also allege Mr Lucas expressed support for extreme right-wing ideology’; further, “What we know is this person had anti-government sentiment, he was anti-Semitic, he has neo-Nazi interests and he has anti-Indigenous interests”, NSW Police Assistant Commissioner Mark Walton said. See also : Man charged after allegedly planning rightwing terrorism attack on NSW south coast, AAP/The Guardian, March 16, 2020 (‘Police say 21-year-old with neo-Nazi interests from Sanctuary Point was allegedly planning to disrupt an electrical substation and source material to construct an explosive device’). A week later, following further investigations, Joshua’s 23yo brother Benjamin was also charged: ‘Police will allege the brothers were involved in early planning for a terrorist act and were trying to obtain military equipment, including firearms, and other items capable of making improvised explosive devices.’

According to media reportage, police acted after becoming aware of online statements by Joshua in February, though whether or not he was a Person of Interest prior to this date is of course unknown. My own expectation is that Joshua was indeed vocal online, and almost certainly connected to a wider network of neo-Nazis and White supremacists. In which context, police have stated that investigations are ongoing, so it would appear possible that the brothers’ associates will also receive a knock on the door. Finally, if the allegation that the brothers were planning to disrupt an electrical substation is correct, this is redolent of the political strategy pursued by so-called ‘accelerationists’ belonging to neo-Nazi terror groupuscules Atomwaffen, The Base and related organisations.

On yeah: fascist pin-up boy and former Senator Fraser ‘Final Solution’ Anning was declared bankrupt on March 16, Exactly One Year After He Was Egged. 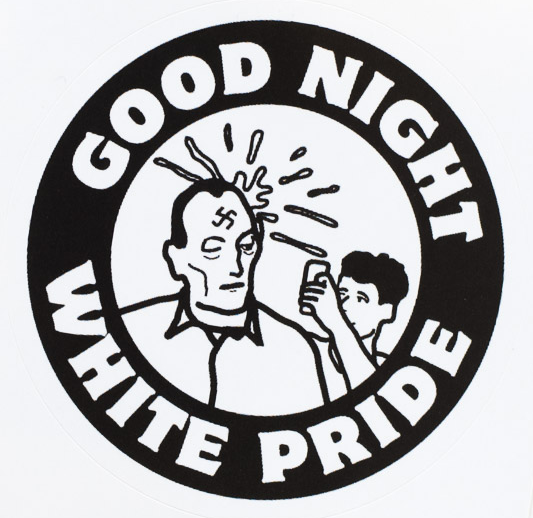 Last week on Yeah Nah Pasaran!, we spoke to ‘Roy’ of the group Paparoa, the anti-fascist research group which formed in the aftermath of the Christchurch massacre. As detailed in the relevant post, members of Action Zealandia (AZ: the successor organisation to the Dominion Movement) have been in the news recently, especially by way of former New Zealand soldier Max Newsome. And while some regard the prospect of another massacre as a really bad thing, Twitter is more than happy to allow AZ to promote itself on their platform. Further, bellingcat has recently revealed that on a Telegram channel, a Ukrainian neo-Nazi who idolises the Christchurch killer shared a terror threat to the Al Noor Mosque from Action Zealandia member Sam Brittenden. See : Revealed: The Ukrainian Man Who Runs A Neo-Nazi Terrorist Telegram Channel, Michael Colborne, March 18, 2020:

Even by the low standards of Telegram, an online messaging service that is sometimes described as “a safe haven for pro-terror Nazis”, the Ukrainian-language Telegram channel devoted to praising the Christchurch shooter is an ugly spectacle.

The channel, which we will not name as to not promote it, is full of vicious racism, anti-Semitism, Islamophobia and neo-Nazism, as well as open calls for violence and murder. It continues to sell bound translations of the Christchurch shooter’s hateful manifesto, as we first revealed in an investigation in August 2019. Perhaps sensing a new business/recruitment opportunity, the channel now also sells and distributes Russian-language translations, having sold only Ukrainian translations previously. The channel continues to share the shooter’s live-streamed video of the attacks and promote praise of said shooter, as well as other far-right terrorists …

Police in Germany have recently (March 19) conducted raids on neo-Nazis involved in the Reichsbürger movement:

German police have raided premises nationwide linked to an anti-Semitic far-right movement called Reichsbürger (Citizens of the Reich). Neo-Nazi propaganda and firearms were seized in the raids, in 10 of Germany’s 16 states. The targeted group, “United German Peoples and Tribes”, is part of Reichsbürger, whose members reject the German state as a legal entity. The interior ministry said racism “even in times of crisis” would be combated.

This follows on from the banning of and arrests of members of ‘Combat 18’ in January, a mass shooting in Hanau and raids upon and the arrest of members of a right-wing terror cell which dubbed itself ‘Der harte Kern’ (‘The Hard Core’) in February. Curiously, ‘the group was also reported to have international links: members had contact with the far-right Soldiers of Odin, another extremist group founded in Finland five years ago’; the Melbourne franchise of the Soldiers was notably compared to the Guardian Angels (!) by ‘The Age’ in 2016.

See also : Can German Activists Stop the Neo-Nazi Resurgence?, Josephine Huetlin, The Daily Beast, February 18, 2020 (‘How do you hold the fascists [at] bay? Germans are protesting—and coming up with some novel strategies’).

A few days ago, ‘Miss Hitler’ and three others were convicted of belonging to banned neo-Nazi group National Action (NA):

NA was one of the groups which formed on now-defunct site Iron March; its Australian equivalent, Antipodean Resistance, has dissolved, largely into The Lads Society and the newly-formed National Socialist Network. 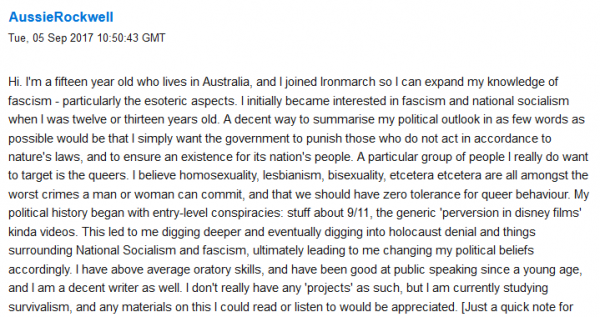