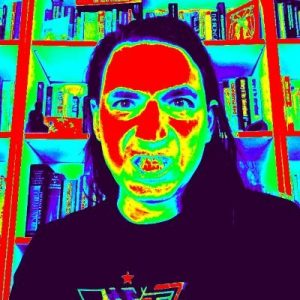 On this week’s episode of Yeah Nah, we talk to writer and researcher Spencer Sunshine [Twitter] about El Presidente Trump’s declaration of WAR! on anti-fascism; the political function and history of this kind of rhetoric; conspiracies and antisemitism; and what role, if any, anti-fascists in the US are playing in the current revolts in the US.

I have been creating research and analysis about the Far Right in the United States for 15 years. It’s a hard, dirty, and dangerous job. And I’m asking for your support in order to continue this work. Most immediately, I need help to complete an in-depth investigation into neo-Nazi James Mason and his terrorist murder manual Siege. I have spent two years working on it, including extensive archival work; I’ve long run out of my savings, and still hope to complete it by early summer 2020.

Spencer’s most recent essays include ‘Blaming it on Antifa: Trump’s Crisis Scapegoats’, The Battleground, June 5, 2020 — Pundits are rehashing their same arguments about whether Antifa is good, bad, or terrorists. But the discussion is absurd to even have. Antifa is a red herring, which the president is dangling to distract attention from the pink elephant in the room. — and ‘Trump’s Antifa Conspiracy Theory Attempts to Erase Powerful Black-Led Organizing’, truthout, June 5, 2020.

See also : antifa notes (june 3, 2020) : notes on antifa (June 3, 2020) | Trump’s Threats to Antifa Are an Affront to Black Agency and a Risk to All Protest, Natasha Lennard, The Intercept, June 3, 2020 | Little evidence of antifa links in U.S. prosecutions of those charged in protest violence, Sarah N. Lynch, Mark Hosenball, Mica Rosenberg, Brad Heath, Reuters, June 8, 2020 | Donald Trump Amplified A Conspiracy Theory That Buffalo Protester Martin Gugino Was Trying To “Scan” The Police Before He Was Injured, Craig Silverman, Buzzfeed, June 9, 2020 | He Tweeted That He Was the Leader of Antifa. Then the FBI Asked Him to Be an Informant., Ryan Devereaux, The Intercept, June 10, 2020.