For those of you coming in late, ‘The Lads Society’ is a nazi groupuscule established by members of the ‘United Patriots Front’ (UPF) following its collapse in 2017. Tom Sewell, the Society’s lvl boss, is former UPF fuehrer Blair Cottrell‘s ex-flunkey; under the umbrella of ‘The Lads’, over the last three years young Thomas has managed to gather around him several score of his fellow Hitler stans in Melbourne, Sydney, Brisbane and elsewhere. You may remember Cottrell and Sewell from such headlines as Christchurch shooting accused Brenton Tarrant supports Australian far-right figure Blair Cottrell (Alex Mann, Kevin Nguyen and Katherine Gregory, Background Briefing, ABC, March 23, 2019) or New clues emerge of accused New Zealand gunman Tarrant’s ties to far right groups (Byron Kaye, Tom Allard, Reuters, April 4, 2019) or Threats from white extremist group that ‘tried to recruit Tarrant’ (Patrick Begley, The Sydney Morning Herald, May 2, 2019).

For about a-year-and-a-half, Sewell and his boys ran a space in Cheltenham, but then lost it after sustained community pressure. In Sydney, the NSW branch operated from a location in Ashfield, but it too fell over sometime after opening in 2018. Undeterred by hostile media reportage, community opposition and links to a mass murderer, Sewell and The Lads have soldiered on and last year opened up a NEW! space in Melbourne’s south-east:

The space was leased to The Lads by [Some Body] in July 2019 and falls within the remit of Knox City Council.

Apart from meeting, talking shop and lifting weights, The Lads have also recently launched a ‘political’ project: the ‘National Socialist Network’ (NSN). Under the wise guidance of Sewell and ex-‘Antipodean Resistance’ (AR) geek Jacob Hersant, the NSN has been busy doing nazi graff, distroing nazi agitprop and generated OMGWTF headlines in May, courtesy of the Herald Sun: 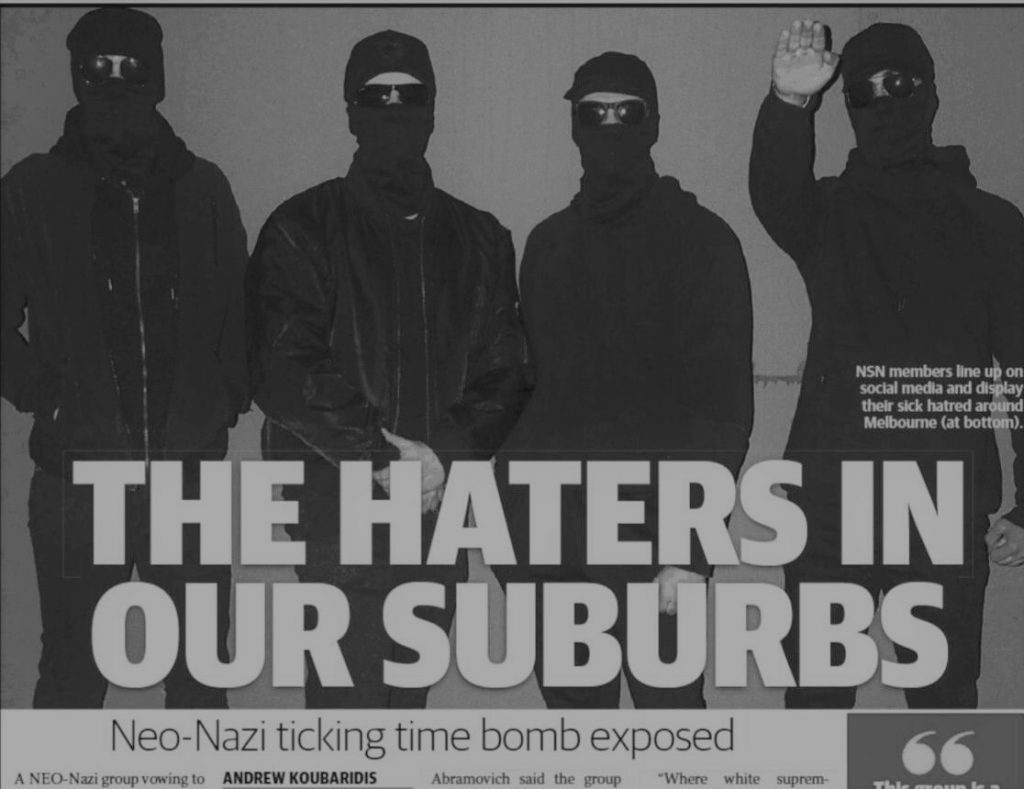 The Lads of the NSN naturally thrilled to the article, constituting as it did little more than free advertising for the budding génocidaires. On the other hand, their adoption of the name ‘National Socialist’ does at least render it that little bit more difficult for pundits to not name the Lads ‘neo-Nazi’.

NB. ‘National Socialist Network’ was briefly the name given to the remnants of ‘National Action’ in the UK after it collapsed; AR was, of course, the fraternal organisation of NA; a few weeks ago, four of its members — including ‘Miss Hitler’ LOL — were jailed after being found guilty of belonging to NA, which was proscribed as a ‘terrorist organisation’ in 2016.

See also : Neo-Nazi militant group grooms teenagers, Daniel De Simone and Ali Winston, BBC, June 22, 2020 : ‘The Base is the latest underground organisation to emerge from an international neo-Nazi network originally generated by a now-defunct web forum called Iron March. Other organisations include the banned British groups National Action and the Sonnenkrieg Division, as well as the Atomwaffen Division in the USA, which has been dismantled by a nationwide FBI investigation.’

Oh, Iron March also gave birth to Antipodean Resistance. Which, with The Lads, has now morphed into NSN.