Happy May Day ‘N’ All That.

In Melbourne, May Day continues to shuffle along, and you can join in this weekend by way of: 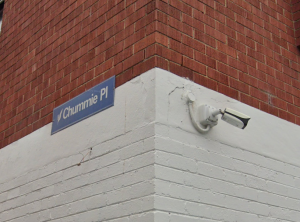 The Walking Tour will be conducted by the Anarchist Media Institute Convener Dr. Joseph Toscano. The tour will conclude at approximately 12:30pm at Her Majesty’s Theatre (219 Exhibition St, Melbourne), the home of Australia’s first anarchist organisation formed on the 1st May 1886 – The Melbourne Anarchist Club. 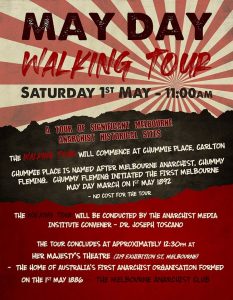 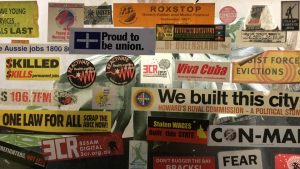 ‘Every year 3CR joins communities around the world in celebrating the achievements of the labour movement, and to show solidarity with the continued struggle for labour rights and fair working conditions for everyone. Tune in from 7am to hear unique workplace perspectives from Aboriginal communities protecting and rehabilitating country, Palestinian workers rights, the history of May Day, campaign updates, community events and much much more.’ 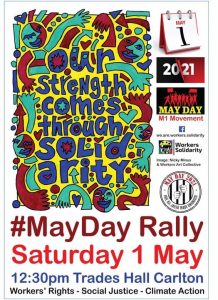 Workers Solidarity has organised a rally and march, beginning at 12.30pm at Trades Hall, also stating:

Many people are asking why are there two May Day marches? May Day is on May 1. But the Melbourne May Day Committee made a decision many many many years ago that the march in Melbourne should happen on the Sunday after May Day – until the Government granted a public holiday on May 1. Despite many many many discussions over the years, the Melbourne May Day Committee have maintained this policy, even when May 1 is on a Saturday – like this year. So we had some discussions with the M1 Movement in Sydney (who successfully shifted the Sydney rally to May 1) and also with comrades internationally about their experiences on May 1. At a public meeting organised by Workers Solidarity on 12 April it was resolved to launch the M1 Movement in Melbourne and hold a rally on May 1 – and join most cities, towns and villages worldwide in celebrating & struggling on this day. With May Day greetings to all comrades marching in Melbourne and worldwide. Melbourne M1 Movement / Workers Solidarity.

4) At The Bosses’ Convenience 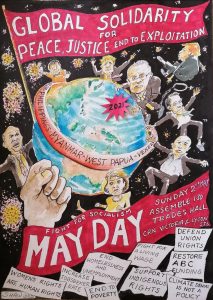 The Melbourne May Day Committee continues its tradition of celebrating May Day not on May 1 but the first Sunday after May Day. The rally starts at Trades Hall at 1.30 and there’s a march at 2pm. 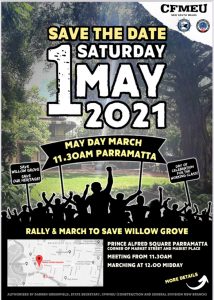 In Sydney, an event will be held on May Day, with marchers assembling at Prince Alfred Square in Parramatta at 11.30am. Organised by ‘The May 1 Movement’ — which ‘formed to build for a massive display of working class power on May 1 2020 under the banner “Workers’ Rights – Social Justice – Climate Action” and to continue campaigning into the future’ — the M1M march will proceed to Willow Grove. Also at 10.30am, the Construction Forestry Maritime Mining and Energy Union, Maritime Union of Australia, United Workers Union and Unions NSW will be assembling, noting that:

May 1 is international day of the workers. Our day. We demand a rise in the minimum wage. We demand the right to industry bargaining. We demand free, properly funded public education from early-childhood to uni. We demand an immediate transition to a carbon neutral economy that lifts every worker into conditions of dignity and respect. We demand that our Indigenous comrades receive the justice long denied.

Further, this year we are taking Mayday to the streets of Parramatta to defend the Green Ban on the destruction of the historic Willow Grove site in Parramatta.

We built this city – the future is ours to win. Get amongst it!

The Canberra May Day Collective is ‘a group of local activists who publicly celebrate the achievements of the labour movement’. They’ve organised an event called ‘Songs of Solidarity’, ‘an afternoon of music, poetry and readings’, at Smith’s Alternative.

From The Department of The Moar You Know: 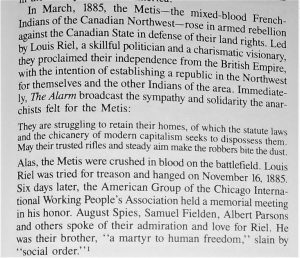 See also : May Day & Repression of Anarchists in Indonesia (May 8, 2019) | Hear also : Haymarket and the History of Mayday : ‘May Day Debut episode! The anarchist origins of May Day in the Haymarket affair’, The Ex-Worker, CrimethInc, April 30, 2013.

I live in Melbourne, Australia. I like anarchy. I don't like nazis. I enjoy eating pizza and drinking beer. I barrack for the greatest football team on Earth: Collingwood Magpies. The 2021 premiership's a cakewalk for the good old Collingwood.
View all posts by @ndy →
This entry was posted in Anarchism, History, State / Politics, That's Capitalism!, Trot Guide and tagged May Day, May Day 2021. Bookmark the permalink.