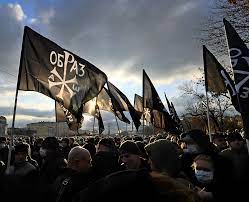 On this week’s episode of Yeah Nah Pasaran! on 3CR we talk to Dr Robert Horvath [Twitter]. As well as being a lecturer in Politics at La Trobe University and the author of Putin’s Fascists: Russkii Obraz and the Politics of Managed Nationalism in Russia (Routledge, 2021), Robert has the distinction of recently having joined a list of 121 Australians banned from traveling to Russia by its Foreign Ministry because ‘Russophobia’. We spoke to Robert about his book, fascism and the far right in Russia and the war in Ukraine (and in doing so I’ve recalled having blogged at some length about the state repression of and murderous neo-Nazi violence being directed at anti-fascists in Russia).

• This episode will be available as a podcast on Apple, Spotify and other platforms after broadcast.
• We also have a Facebook page for the show, which you’re invited to ‘Like’ and to ‘Follow’.
• I have a Patreon account which youse are also invited to support.
• This post is dedicated to the memory of murdered anti-fascists Alexander Ryukhin (April 2006); Alexei Krylov (March 2008); Anastasia Baburova (January 2009); Fyodor Filatov (October 2008); Ilya Bondarenko (July 2007); Ilya Dzhaparidze (June 2009); Ivan Khutorskoi (November 2009); Stanislav Markelov (January 2009); Timur Kacharava (November 2005) and to all the other fighters, known and unknown, who’ve left us.