Careful with that Axe, Eugene 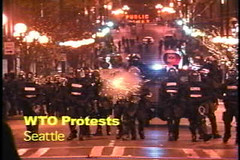 Those “Eugene Anarchists” : A Cautionary Tale

The Eugene Weekly is running a five-part series by Kera Abraham on anarchists in Eugene, Oregon (US), the community’s rise, government repression, and fall:

In a high-profile sweep that began on Dec. 7, 2005 and continues into the present, the federal government indicted 18 people for a spate of environmentally motivated sabotage crimes committed in the West between 1996 and 2001. No one was physically hurt in the actions, mainly arsons against corporate and government targets perceived to be destroying the planet. Yet the FBI is calling the defendants “eco-terrorists” and seeking particularly stiff sentences for the five remaining non-cooperators, whose trials are pending. Eight defendants have pled guilty, four are fugitives and one committed suicide in jail…

Lacey Phillabaum sat somberly in front of a bed of poppies in Whiteaker, her face darkened by night shadows, and justified the black bloc’s behavior at the Battle of Seattle. “There’s nothing in the world like running with a group of 200 people all wearing black,” she said, blue eyes fixed on a point beyond Tim Lewis‘ camera, “and realizing each of you is anonymous, each of you can liberate your desires, each of you can make a difference right there.”

It was mid-June 2000, just days before the premiere of Lewis’ documentary about the combustible trinity: Eugene, anarchy and the WTO — then called Smash!; now titled Breaking the Spell. Anarcho-feminists had been calling Lewis an attention-hogging sexist for months, and now he figured he better get a woman to host his film. Phillabaum, an articulate and bold activist who had been an EF!J editor from 1996-1999, was an obvious choice. She would later regret agreeing to it…