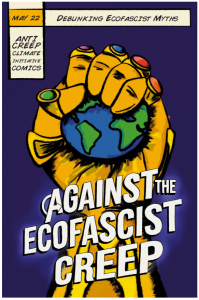 On this week’s episode of Yeah Nah Pasaran! on 3CR we talk to Dr April Anson [Twitter]. April is an Associate Professor at San Diego State University, and (as part of the Anti-Creep Climate Initiative) the co-author of Against the Ecofascist Creep:

Sometimes we wish we could solve the world’s problems with a *snap* of our fingers, even though we know it’s never that simple: compound problems require compound solutions. Still, accelerating climate crisis and the unwillingness of global leaders to take meaningful climate action can breed nihilism – likely we’ve all witnessed it in students, colleagues, family members, and even ourselves. With such nihilism, though, sometimes comes a notion that mass violence could be a viable environmental solution. This specter of ecofascism looms in pop-cultural imaginations as a malevolent threat for some and a tantalizing fantasy for others.

We spoke to April about the relationship between ecological and fascist thought, colonialism and political crisis, and more besides.

I live in Melbourne, Australia. I like anarchy. I don't like nazis. I enjoy eating pizza and drinking beer. I barrack for the greatest football team on Earth: Collingwood Magpies. The 2023 premiership's a cakewalk for the good old Collingwood.
View all posts by @ndy →
This entry was posted in Anti-fascism, Broken Windows, Cats, Death, History, Media, State / Politics, Student movement, That's Capitalism!, War on Terror and tagged 3CR, Against the EcoFascist Creep, April Anson, eco-fascism, Yeah Nah Pasaran. Bookmark the permalink.