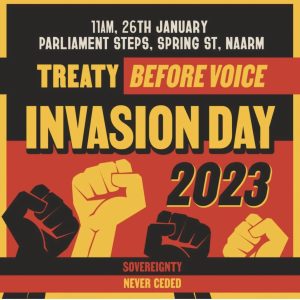 In 1994, the Australian government declared January 26 a day of nationalist celebration: ‘Australia Day’. ‘Australia Day’ is thus either the day in 1788 ‘when Captain Cook stepped ashore’ (according to Bridget McKenzie) or — possibly — when Captain Arthur Phillip raised the Union Jack and took possession of All The Things on behalf of King George III. In answer to the question ‘What happened next?’, the date is also known as ‘Invasion Day’ or ‘Survival Day’ and remembered as a Day of Mourning.

Not everybody agrees January 26 is a date to celebrate. Some even reckon that, if the colonial-settler state of Australia was implanted at (and for) His Majesty’s pleasure on the basis of a legal fiction, then after several centuries some kinda treaty between the state and Indigenous peoples is appropriate. Still others wanna #OMGWTF ‘Abolish Australia’ altogether! Sometimes you’ve got to take the hardest line, I guess.

In any case, along with Melbourne (Naarm), similar events marking January 26 as Invasion/Mourning/Survival Day are taking place elsewhere across the country:

VICTORIA
• Melbourne
Victorian Parliament
11am
• Portland
The Convincing Ground
10am

See/hear also : What is Constitutional Recognition Through A Voice to Parliament?, From The Heart | The Indigenous Voice Co-design Process Final Report | Voice will empower us, not undermine Sovereignty, Dr. Hannah McGlade, National Indigenous Times, January 16, 2023 | Price and Pearson, uneasy allies?, Tim Rowse, Inside Story, December 23, 2022 | There is no hope in a Voice to Parliament, Irene Watson, Pearls and Irritations, October 29, 2022 | The History of a Lie: The Mabo case after 30 years (featuring Irene Watson), Countersign, May 31, 2022 | Native Title is not Land Rights, and Reconciliation is not Justice, Gary Foley (1999) … and Anarchism and Aboriginal sovereignty (July 16, 2008) /// Decolonizing Solidarity.

I live in Melbourne, Australia. I like anarchy. I don't like nazis. I enjoy eating pizza and drinking beer. I barrack for the greatest football team on Earth: Collingwood Magpies. The 2023 premiership's a cakewalk for the good old Collingwood.
View all posts by @ndy →
This entry was posted in Broken Windows, Death, History, State / Politics, That's Capitalism! and tagged Invasion Day. Bookmark the permalink.