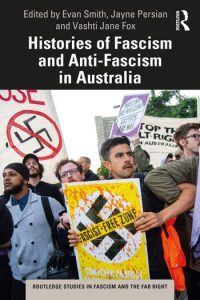 It’s 2023 and Yeah Nah Pasaran! is back for a fourth year of broadcasting (and maybe a li’l trouble-making).

On this week’s episode we talk to Evan Smith [Twitter]. Evan is a blogger, historian and most recently the editor (with Jayne Persian and Vashti Jane Fox) of the NEW! Routledge title Histories of Fascism and Anti-Fascism in Australia:

Histories of Fascism and Anti-Fascism in Australia provides a history of fascist movements and anti-fascist resistance in Australia over the past century.

In recent years, the far right has become a resurgent force across the globe, resulting in populist parties securing electoral victories, social movements organising on the streets, and acts of right-wing terrorism. Australia has not been immune to this. However, this is not merely a recent phenomenon; it has a long history of fascist and far-right groups and individuals. These groups have attempted to situate themselves within the wider settler colonial political landscape, often portraying themselves as the inheritors of a violent and exclusionary colonial past. Concurrently, these groups have linked into globalised anti-communist and white supremacist networks. At the same time, Australia has often seen resistance to fascism and the far right, from the political centre to the far left. Covering the period from the 1920s to the present day, and featuring insights from historians, sociologists, and political scientists, this book provides the most detailed account of this fascinating and important topic.

We spoke to Evan about the book project, anti-/fascism in Australia, Nazi uniforms, ninja turtles and more. (Note that we’ll almost certainly be talking to other contributors to the volume later in the year.)

I live in Melbourne, Australia. I like anarchy. I don't like nazis. I enjoy eating pizza and drinking beer. I barrack for the greatest football team on Earth: Collingwood Magpies. The 2023 premiership's a cakewalk for the good old Collingwood.
View all posts by @ndy →
This entry was posted in Anti-fascism, History, State / Politics, That's Capitalism!, War on Terror and tagged Evan Smith, Histories of Fascism and Anti-Fascism in Australia, Jayne Persian, Vashti Fox, Vashti Jane Fox, Yeah Nah Pasaran. Bookmark the permalink.