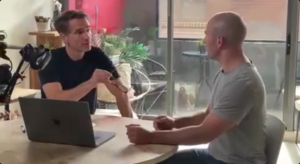 The 29-year-old leader of the European Australia Movement was convicted and sentenced to an 18-month community corrections order with 150 hours community service on Thursday in Melbourne Magistrates Court, where he was previously found guilty of recklessly causing injury and affray …

The magistrate took into account his work history, along with his fiancee being 36 weeks’ pregnant – a factor Sewell emphasised would lead to “undue suffering” through his sentence.

He also asked the court to consider his employer, saying he worked full-time as a labourer and apprentice. He previously served as a rifleman in the army and worked with disadvantaged youth, he said.

Sewell is due to face a separate County Court trial in August and spent seven months on remand in solitary confinement because of that case.

Apart from anything else, the positive reference to Tommeh!’s work ‘with disadvantaged youth’ is amusing. So too, the fact that Christian nationalists have halped raise tens of thousands of dollars for Sewell and the other troubled yoof he’s gathered under his wing in the last few years; presumably, the Hitler Youth training at Legacy Boxing in West Sunshine can now more easily obtain concession memberships, while drinks are subsidised at The Irish Times Pub. 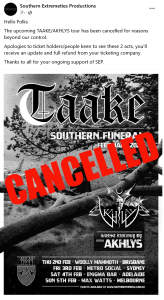 On the second anniversary of the January 6 stoopid, Spencer Beswick asks The Jan. 6 coup blared an alarm about rising fascism. Will we hear it? (The Washington Post), in which Conrad Beswick notes that in the 1980s, ‘… a new generation of antifascists rose up to meet the renewed danger of fascism — often with masked faces and baseball bats in hand. Anarchists, punks and other leftists united to form the organization Anti-Racist Action (ARA) in Minneapolis in the late 1980s, which quickly spread across the country.’ Funnily enough, a NEW! book documenting ARA has just been released: We Go Where They Go: The Story of Anti-Racist Action (PM Press, 2023), which sounds both ace and grouse:

What does it mean to risk all for your beliefs? How do you fight an enemy in your midst? We Go Where They Go recounts the thrilling story of a massive forgotten youth movement that set the stage for today’s anti-fascist organizing in North America. When skinheads and punks in the late 1980s found their communities invaded by white supremacists and neo-nazis, they fought back. Influenced by anarchism, feminism, Black liberation, and Indigenous sovereignty, they created Anti-Racist Action. At ARA’s height in the 1990s, thousands of dedicated activists in hundreds of chapters joined the fights—political and sometimes physical—against nazis, the Ku Klux Klan, anti-abortion fundamentalists, and racist police. Before media pundits, cynical politicians, and your uncle discovered “antifa,” Anti-Racist Action was bringing it to the streets.

Two other volumes of relevance to be published recently are:

• No Pasarán! Antifascist Dispatches from a World in Crisis (AK Press, 2022)

¡No Pasarán! is an anthology of antifascist writing that takes up the fight against white supremacy and the far-right from multiple angles. From the history of antifascism to today’s movement to identify, deplatform, and confront the right, and the ways an insurgent fascism is growing within capitalist democracies, a myriad of voices come together to shape the new face of antifascism in a moment of social and political flux.

• Histories of Fascism and Anti-Fascism in Australia (Routledge, 2023)

In recent years, the far right has become a resurgent force across the globe, resulting in populist parties securing electoral victories, social movements organising on the streets, and acts of right-wing terrorism. Australia has not been immune to this. However, this is not merely a recent phenomenon; it has a long history of fascist and far-right groups and individuals. These groups have attempted to situate themselves within the wider settler colonial political landscape, often portraying themselves as the inheritors of a violent and exclusionary colonial past. Concurrently, these groups have linked into globalised anti-communist and white supremacist networks. At the same time, Australia has often seen resistance to fascism and the far right, from the political centre to the far left. Covering the period from the 1920s to the present day, and featuring insights from historians, sociologists, and political scientists, this book provides the most detailed account of this fascinating and important topic.

Fingers crossed we will be speaking to the editors of/contributors to the above volumes soon on Yeah Nah Pasaran!.

See : January 8, the Brazilian January 6: Tracking the Rise of Fascism from the United States to Brazil, CrimethInc, January 10, 2023 | Democracy under attack in Brazil: 5 questions about the storming of Congress and the role of the military, Rafael R. Ioris, The Conversation, January 9, 2023 | ‘Sir, please get me the Manager’: Brazil before and after Bolsonaro, Guido Melo, Overland, November 24, 2022.

I live in Melbourne, Australia. I like anarchy. I don't like nazis. I enjoy eating pizza and drinking beer. I barrack for the greatest football team on Earth: Collingwood Magpies. The 2023 premiership's a cakewalk for the good old Collingwood.
View all posts by @ndy →
This entry was posted in Anti-fascism, Broken Windows, History, Media, State / Politics, That's Capitalism!, War on Terror and tagged Akhlys, Anti-Racist Action, antifa notes, Brazil, Christian nationalism, European Australian Movement, GiveSendGo, Histories of Fascism and Anti-Fascism in Australia, January 6, Legacy Boxing Gym, Matthew Chalk, National Socialist Network, No Pasarán! Antifascist Dispatches from a World in Crisis, Southern Extremities, Taake, The Baldies, Thomas Sewell, Tom Sewell, We Go Where They Go: The Story of Anti-Racist Action. Bookmark the permalink.