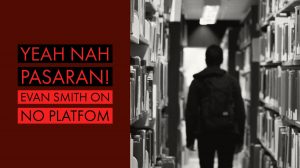 On this week’s episode of Yeah Nah, we talk to Evan Smith about his upcoming book No Platform: A History of Anti-Fascism, Universities and the Limits of Free Speech (Routledge, 2020):

This book is the first to outline the history of the tactic of ‘no platforming’ at British universities since the 1970s, looking at more than four decades of student protest against racist and fascist figures on campus.

The tactic of ‘no platforming’ has been used at British universities and colleges since the National Union of Students adopted the policy in the mid-1970s. The author traces the origins of the tactic from the militant anti-fascism of the 1930s–1940s and looks at how it has developed since the 1970s, being applied to various targets over the last 40 years, including sexists, homophobes, right-wing politicians and Islamic fundamentalists. This book provides a historical intervention in the current debates over the alleged free speech ‘crisis’ perceived to be plaguing universities in Britain, as well as North America and Australasia.

See also : The university ‘free speech crisis’ has been a rightwing myth for 50 years, Evan Smith, The Guardian, February 22, 2020 | 45 Years On: The History and Continuing Importance of ‘No Platform’, Evan Smith, New Socialist, April 18, 2019.

I live in Melbourne, Australia. I like anarchy. I don't like nazis. I enjoy eating pizza and drinking beer. I barrack for the greatest football team on Earth: Collingwood Magpies. The 2023 premiership's a cakewalk for the good old Collingwood.
View all posts by @ndy →
This entry was posted in Anti-fascism, Broken Windows, History, Media, State / Politics, Student movement, That's Capitalism! and tagged 3CR, Evan Smith, Freeze Peach, New Historical Express, No Platform, Yeah Nah Pasaran. Bookmark the permalink.