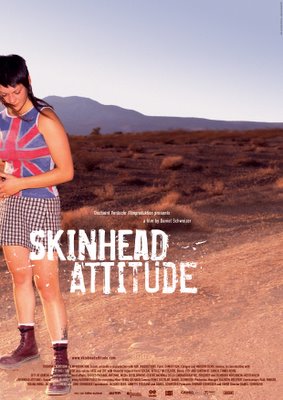 ‘Mainstream’ (read: corporate/state-controlled) media frequently confuse skinheads with boneheads. “Bonehead” is a derogatory term used by Traditional and other Skins to denote any Skinhead who holds to racist or White Power beliefs, as well as those Neo-Nazis who have adopted the Skinhead “look” in an attempt to hijack the movement. The documentary film Skinhead Attitude is one of the few to take this distinction seriously (although the filmmaker’s use of the analogy of Cain & Abel is deeply problematic). In any case, I highly recommend this film, as it at least provides authentic skins a voice. (Oh, it also features a very sexy French skin called Karole as our ‘guide’… sigh.)

I live in Melbourne, Australia. I like anarchy. I don't like nazis. I enjoy eating pizza and drinking beer. I barrack for the greatest football team on Earth: Collingwood Magpies. The 2021 premiership's a cakewalk for the good old Collingwood.
View all posts by @ndy →
This entry was posted in Anarchism, Anti-fascism, Film, History, Music. Bookmark the permalink.