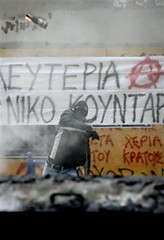 “GREEK riot police clashed with stylish anarchist youths in Athens today, turning the city centre into a battleground of billowing smoke for hours. The youths hurled hundreds of petrol bombs at police, burning four cars and one shop. Police retaliated with several rounds of teargas that choked up the capital’s streets” (Police clash with anarchists, ‘Correspondents in Athens’ a/k/a Reuters, The Australian, January 18, 2007).

According to a fuller and — presumably — more accurate account than the Reuters report that The Australian (and the Fairfax and Murdoch press generally) have relied upon, the Athens News Agency claims:

…Shop windows, including a cafeteria and a bank, were smashed and four cars were torched along Fillelinon street during collisions between protestors and riot police, while police responded with use of teargas.

The fires were attributed to firebombs lobbed at a car belonging to the Bosnia-Herzegovina embassy by masked anarchist and extreme-left elements, which frequently incite confrontations and clashes with police at protests and demonstrations in Athens. The fire then spread to three adjacent vehicles and a nearby cafeteria.

Fire-engines stationed nearby responded immediately and quickly put out the blaze, while traffic and the protest march were interrupted during the fire-fighting operation.

Minor clashes with police also occurred in the main body of the rally when protesting students attempted to break through a police cordon around Parliament but were repelled with limited use of teargas.

Wednesday’s rally had been organised in advance to coincide with a planned second debate on Article 16 in Parliament, which did not finally take place as the debate was wrapped up on January 10…

Violent incidents, in which riot police officers briefly caught fire when attacked by firebombs, also occurred as the masked protestors withdrew from Syntagma Square and Panepistimiou toward the Athens Metsovian Polytechnic, where they barricaded themselves into the university grounds and threw stones and fire-bombs at police. 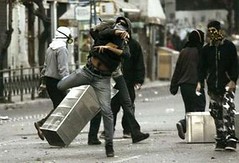 Students and workers in the Greek education sector are pissed off by the Greek government’s plans to introduce private Universities (quite a contrast to Australia eh?), and organised a demo — of somewhere between 3,000 (BBC) and 9,000 (The Australian / Reuters) people — in Athens (and other cities, including Thessaloniki) to protest. AP expresses concern over the possibility of previous militancy having ‘spilt over’ into the student demos, simultaneously demonstrating massive ignorance over recent — and not-so-recent — Greek political history (Cars burnt as clashes in Greece make student protest against education sabotage, International Herald Tribune, January 17, 2007).

Both the statist reactionaries currently occupying the Greek parliament, and their ‘Socialist’ opposition, support the proposed sabotage of the higher education sector (quite similar to Australia eh?); ‘reforms’ requiring an amendment to (Article 16 of) the Greek constitution: “The final vote in Parliament is expected in late February. If approved as expected — the reform is also backed by the main opposition Socialists — the change would come into effect after 2008.”

Local Australian ‘socialists’, meanwhile, have placed the blame for the ultra-violence squarely at the feet of approximately 40 or so jet-setting psychotic Kiwis — possibly acting in close co-operation with football hooligans from either England or Germany or Sweden — and demanded that governments the world over initiate an immediate crackdown on border-crossings by such crazed political malcontents. 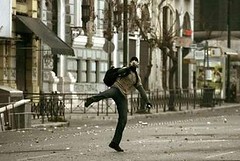 I live in Melbourne, Australia. I like anarchy. I don't like nazis. I enjoy eating pizza and drinking beer. I barrack for the greatest football team on Earth: Collingwood Magpies. The 2021 premiership's a cakewalk for the good old Collingwood.
View all posts by @ndy →
This entry was posted in !nataS, Anarchism, State / Politics, Student movement. Bookmark the permalink.