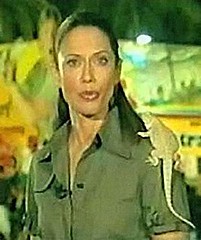 Above : Seemingly gratuitous img of a journalist. Sitting on Naomi Robson‘s shoulder. Oddly enough, despite the many and eminently sensible calls for Robson’s imprisonment for crimes against good taste, Australian corporate media has spent more time reading the entrails produced by her bloody departure last year from Today Tonight than it has paying attention to Josh Wolf‘s many months in prison for having attempted to engage in some ‘real’ journalism.

It feels as if I’ve barely had a chance to blink since walking out the front gate of the Federal Detention Center in Dublin on April 3, but the debates on what we should take away from my experience have already escalated into a full-on storm of differing voices. Much of the debate has focused on whether or not I am a journalist; this question is nothing more than a distraction and a red herring over the very real issues exposed by the marathon saga that only concluded when I was released from custody.

For the purposes of this argument, let’s assume that I am a journalist. What does this story mean for the role of media in our society?

In February 2006, I was subpoenaed by the FBI Joint Terrorism Task Force to appear before a federal grand jury with my source materials and submit to secret examination, a demand that would be unenforceable in a state court under the California shield law’s protection for journalists. The federal government claimed jurisdiction because it was investigating the alleged attempted arson of a San Francisco Police Department vehicle. The federal officials rationalized this claim with a tenuous connection, that is, that federal money was provided to the SFPD.

As would any journalist when his legal rights are circumvented, I decided to fight the subpoena and eventually found myself in federal prison on Aug. 1. During the course of our legal battle, my lawyers and I offered to screen the footage for U.S. District Judge William Alsup in order to show there was nothing of evidentiary value in the unpublished video, but he repeatedly refused to judge the merits of the tape. Though there was nothing of a sensitive nature on my unpublished tape, I continued to fight for the rights I feel were robbed from everyone through my available appeals.

The appeals proved unsuccessful and it was at this time that we decided to put forward the very same resolution we agreed upon last week: I would provide the tape for all to see in exchange for being excused from testifying before the grand jury. We were rejected.

After the judge ordered both parties into a mediation hearing with U.S. Magistrate Joseph Spero, we were eventually able to agree on the original November proposal. On April 3, my video was posted on the Internet, and then provided to the U.S. attorney, along with a declaration stating “no” to two questions:

Could I identify the person Officer Peter Shields was chasing?

Did I witness the incident of the alleged attempted arson?

Many have suggested I am not a journalist because I have personal views about my subject matter; others have argued that I don’t qualify for journalistic protections because I am not employed as a journalist by a corporation. How would a “journalist with a press pass” have responded to such a demand by the federal government?

While I was fighting my legal battle, two reporters for The Chronicle were in a similar situation. The circumstances may have been different, but I think the principle was the same. Thankfully, Chronicle staff writers Mark Fainaru-Wadu and Lance Williams were able to escape doing jail time, but in both cases, we resisted government demands that go against California law and a journalist’s ethics.

The question that needs to be asked is not “Is Josh Wolf a journalist?” but should journalists deserve the same protections in federal court as those afforded them in state courts.

The answer is yes and the means to do it is for Congress to pass a federal shield law equivalent to California’s law. Fainaru-Wadu and Williams could have just as easily been in my place at FDC Dublin. There are no protections afforded to journalists in the context of a federal grand jury. The debate over who qualifies as a journalist can wait, but we need a federal shield law now.

See also : Dan Silkstone, ‘The blogs that ate cyberspace’, The Age, April 7, 2007. “Blogs give you voice and validation. Say anything you like and if you are lucky, somebody will hear you and leave a reply. Once upon a time people wrote their most private thoughts in a diary and hid it in their top drawer. Now they post them for all the world to see. Then, the writer’s warning was publish and be damned. Now, the great fear is publish and be ignored.” Geert Lovink, ‘Blogging, the nihilist impulse’, Eurozine, February 1, 2007. [Original in English. First published in Lettre Internationale 73 (German version).] “Media theorist and Internet activist Geert Lovink formulates a theory of weblogs that goes beyond the usual rhetoric of citizens’ journalism. Blogs lead to decay, he writes. What’s declining is the “Belief in the Message”. Instead of presenting blog entries as mere self-promotion, we should interpret them as decadent artefacts that remotely dismantle the broadcast model.”

More than 100,000 demonstrators are planning to disrupt the G8 summit this June in the German seaside resort of Heiligendamm — and the dress rehearsals [sic] have already begun.

German [and Kiwi] anarchists travelled to Copenhagen last month to give a violent edge to street protests against the closing of a youth centre. The visitors helped the Danes to erect blazing barricades and filled an armoury of petrol bombs [?]. Then came a stand-off with riot police in Berlin — and more arson as the car of Thomas Mirow, the German deputy Finance Minister, was set alight.

According to Der Spiegel, in an advanced case of what media spindoktors are calling ‘Anti-Globalization Rage’ Disease, in late December 2006 Mirow’s wife’s car was set alight “…and paint balls were thrown against the wall of [his] house. Mirow described the attack as “an act of banal violence of rare senselessness”, saying that it was not the way to gain support for a fair world order. The arson attack was the 37th protest in Germany to date by militant G8 opponents, according to a police spokesperson from the special “Kavala” police unit which has been created for the G8 summit” (‘Protesters Carry Out Series of Attacks Ahead of G8 Summit’, December 29, 2006). Note that Greek anarchists have been setting fire to enough things to be granted some (more) media too — ‘Diplomatic car destroyed in Greek arson attack’, International Herald Tribune, [AP], April 6, 2007.

In general, while rage-filled German arsonists — generally referred to, in Anti-Globalization circles, as Die Deconstructionists — have been known to work closely with German engineers, the history of the relationship between arts graduates (and literature studies graduates in particular) and engineering students is punctuated by sometimes violent sectarianism. Sources close to European squatters’ networks, however, believe that the intervention of a small group of perhaps no more than 40 Kiwi football hooligans has prevented such disputes from emerging in the hothouse political environment of Copenhagen, and it was this key development that allowed the otherwise notoriously slow-moving Danes to place objects on top of one another in order to form what is often termed a ‘barricade’. As for the armoury of petrol bombs, it is unclear at this stage precisely what accounts for the Danes’ astonishing ability to pour liquid into bottles, but a police source states that the intervention of Kiwi anarchists was again crucial.

Opposition to the G8 meeting on the Baltic Sea runs like a thread through all the incidents. The last big showdown before the summit is expected to be May Day in the German capital. Police are already calling it “a warming-up exercise”.

For years May Day in Berlin has been a moment of controlled anger when teenagers go on the rampage, looting shops and setting fire to police cars. This time it seems likely to have a political veneer [sic]. Leaflets show a picture of President Bush’s Air Force One next to a mangled wreck. The “autonomist groups”, anarchist cells across Germany, have called for a month of violence. “Destroy the image of your town,” says one pamphlet Riot against G8. A music CD, meanwhile, entitled Move against G8, will be released after May Day.

“We have never before seen such a militant campaign of the extreme Left in northern Germany,” says Claudia Schmid, head of the Berlin wing of the Agency for the Protection of the Constitution, the equivalent of the Special Branch. Similar reports are coming from Denmark, the Netherlands and the Czech Republic.

About 16,000 police, the most concentrated deployment since the war, have been drafted from across the country and will be backed by soldiers. A 13km (8 mile) steel wall topped with barbed wire is being built around the spa that once played host to the Russian Tsar, Felix Mendelssohn and Adolf Hitler.

Two US naval vessels will be moored off the coast, partly to intercept possible missiles, partly to monitor the water-front. A Royal Navy vessel is to help to patrol the 11km maritime security zone. The 6,000 [embedded] journalists will be taken in and out of the red zone on a steam train, with armed guards.

“It will be a uniquely large and difficult operation, larger than the World Cup,” said Wolfgang Pistol, chief of police in Schleswig-Holstein. The two-day summit, entitled Growth with Responsibility, is costing close to €100 million (£68 million) for security alone.

I live in Melbourne, Australia. I like anarchy. I don't like nazis. I enjoy eating pizza and drinking beer. I barrack for the greatest football team on Earth: Collingwood Magpies. The 2023 premiership's a cakewalk for the good old Collingwood.
View all posts by @ndy →
This entry was posted in Anarchism, Media, State / Politics. Bookmark the permalink.