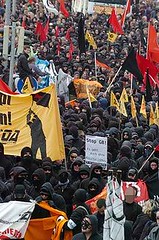 For an account of the last year’s meeting in St. Petersburg, see FCUK the G8! | For an example of the kind of shit our global rulers speak, see “The Aristocrats!” | For an example of the kind of shit our local would-be rulers write, see Mick Armstrong, Is there anything radical about anarchism?, Socialist Alternative, No.117, June 2007 | See also Stefan Steinberg, Germany: Police use massive force against G8 demonstrators in Rostock, wsws, June 4, 2007; “As was the case in the Italian city of Genoa in the anti-G8 protest in 2002 [sic], the so-called “black bloc” of anarchists played a thoroughly dubious role in the skirmishes and fighting in Rostock…” | Remember too, that the whole thing was organised by Globalise Resistance, as Mick Armstrong’s British comrade Guy Taylor reliably informs the world: “For protests such as the EU and G8 summits, there is an umbrella organization that is established to coordinate such mobilizations… More often than not, it is Globalise Resistance that takes that role.”

Barricading the G8 in Germany : A WSM members reports from the front line and the cells…

…A pretty impressive black bloc had formed at the rear-centre composed of AntiFa, anarchist groups and of course the autonomous movement people. Black-clad protesters are an… eclectic bunch politically, [which] is worth remembering.

As the march weaved its way through the elegant city of Rostock, the black bloc seemed to swell considerably as it followed the sounds of the AntiFa sound system. My estimation is approximate, but I would guess it comprised of at least 6-7,000 people. After an hour of marching and chanting, news filtered through that the other rally (which we were to meet at the harbour) had been attacked by police using pepper spray, tear gas and of course the ever-useful baton. Plumes of tear gas could be seen from afar and our march became agitated as it seemed the police had halted its progress at the front to prevent us reaching the harbour and our fellow protesters. There were shouts to get into line among the black bloc as it seemed that we would have to fight our way through to the others. We were a tad anxious as the situation appeared to be deteriorating fast, but were bolstered by the apparent confidence and steely-eyed determination that surrounded us.

Soon, however, the march proceeded and the threat appeared to have abated. We made it to the harbour where the rumours of police violence were substantiated with injured demonstrators being attended to. The police then attempted to arrest people for covering their faces (this is an offence in Germany) and the crowd scattered somewhat into side streets as people fought back against the police repression. The scene escalated quickly as police snatch squads moved in at the sides of the black bloc with some force. However they were met with fearsome resistance, the likes of which I have never before witnessed. Stones, bottles and other projectiles were used to give them a hostile welcome and hold them off as other protesters escaped to safety. It seemed as if police efforts to attack the march and arrest hundreds of anarchists and AntiFa had backfired as they were peppered from all sides by angry demonstrators and they had to beat a hasty retreat after a few minutes…