There’s a ding-dong battle going on at Stormfront at the moment, wherein Dr James Saleam has been called upon to defend his honour, currently under assault by a crazy cat lady named Lilith and — peeking out from behind her skirt — a fiercesome Aryan Warrior named David. This dynamic duo are the leading propagandists for Don Black’s Internet business ‘Down Under’, while Saleam is currently fuehrer of the Australia First Party (AF). (For more on the squabbling factions, see 2007 Sydney Forum : Phantasy vs. Reality.) 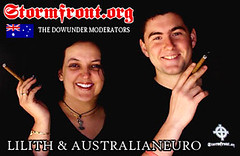 The person responsible for creating the Battlefield Thread is from Newcastle AF, has a fascination with exotic currencies, an unhealthy addiction, and a determination to allow Herr Doktor one “final” opportunity to clear his good name; a name besmirched by his being relegated to that segment of Stormfront reserved for non-whites silly enough to bother arguing with the dimwits who congregate there. Among other matters of concern to beleaguered whiteys, apparently, is Jim’s past, “weather criminal or not”, and its effects upon public perceptions of the otherwise sound political institution that is the AF; his ethnic derivation (or as David puts it: “If you are European in decent, how do you explain your Arabic surname?”); Darrin Hodge’s unceremonious dumping from the Party — after declaring his intention to contest Jim’s position; and finally, Jim’s relationship with Ross May (“Why do you keep letting ‘The Skull’ hang around when it causes more harm than good?”).

In reply, Herr Doktor, being a scholar if not a gentleman, decides to baffle them all with bullshit. He even quotes Georges Sorel:

Are my views “misunderstood”? In general, I remember the quote of Georges Sorel: that nothing gives greater pleasure in being understood by intelligent people than by being misunderstood by blunderheads.

A picture is worth a thousand words

In response to Lilith’s republication of a grim-faced mugshot of Jim, he claims it’s a forgery (which would appear to be pointless), predictably reiterates his innocence, and claims instead that he was framed by the political police for the crime of which he was convicted in 1991 and for which he was sentenced to four and-a-half years jail as punishment. “I was framed” is a line decided upon many years ago and proclaimed from the moment Jim stepped out of prison in 1994, thirteen years ago. So too, his line (or should that be ‘script’?) concerning his attempts to clear his name, the fruits of which are surely bound to ripen at any moment now: “I am currently preparing an application to the Supreme Court to overturn the conviction won against me by the corrupt Special Branch in 1991.” ~ June 18, 2007.

A Tempe man who spent four years in jail over the 1989 shotgun attack on the home of African National Congress representative Eddie Funde has embarked on a campaign to clear his name.

Jim Saleam, 39, a former state and national chairman of the right wing political group National Action, claims he was framed by police. Released from jail in May, he is now in the process of gathering evidence to support his claim and plans to lodge an application for judicial review in the NSW Supreme Court… ~ Scott Tucker, ‘Jim fights to clear his name’, The Glebe, July 12, 1994

Of the second photograph of Jim wearing Nazi insignia, he claims that this photo “of itself could be any number of things. It is a matter of context.” So… it could be a pink elephant riding a unicycle; it’s really all a matter of ‘context’.

Channel 0-28 had planned to run a story on the Progressive Nationalist Party [one of the myriad of short-lived, far right groups of the late ’70s/early ’80s], which they began to film before National Action had been formed. Pretty soon we realised that the producers had done their homework, and they claimed to have an article Jim had written for the West Australian Hungarian Nazi journal Perseverance from the mid-seventies.*

However much I disliked Jim, I didn’t want one of his indiscretions to rebound on the party [National Action], and so organised a cover-up. I told Jim to have the original faxed to him from the National Library in Canberra. I rewrote it, toned it down, had it printed up as a leaflet, carried it around in my back pocket for a few days to age it, rang up Mum in Melbourne to send me one of my files as a cover, then took the leaflet to the TV station with a perfectly sound explanation — Jim had written a thoroughly respectable student nationalist leaflet that had been picked up somehow by the Nazis and then rewritten to make it more acceptable for their readership.

Which was fine, except that the journalists then produced photographs of Jim wearing a swastika armband, taken at an anti-Pinochet demo in 1975. Jim was not happy when they opened the photo album. I was appalled. He had always insisted that he had never been photographed in uniform. These things were important…

[Some weeks or months later] As Dave [Merrett] and I chatted outside Woolworths, a sheet of newspaper blew across our path. It was from the Australasian Spartacist, one of those queer coincidences that provide a little amusement, but our amusement was squashed flat when we turned the sheet over and saw the photo of Jim in Nazi uniform, along with a recent picture of him at the bookstall at the University of New South Wales…

When I got home, Jim was moping around. He became distraught when I showed him the photos. That was it. He was going to sue the Spartacists for libel. After he had quietened down, I told him I felt that in the best interests of the party he should step down from his positions for good. He wouldn’t hear of it. I’d obviously supplied the photo to the Sparts, he said. I hadn’t, but he was unconvinced. In his typical fashion, he was searching everywhere to attribute blame rather than face up to the fact that he was the one stupid enough to pose in a Nazi uniform alongside Ross May. ~ David Greason, I was a teenage fascist, McPhee Gribble, 1994, pp.283–284, 289

Once again, readers on Stormfront are being scammed!

No, this is not a reference to the manner in which Mr. Black milks the fascist cows at Stormfront for donations in order to finance his next failed coup d’état, nor is it a reference to Lilith and David’s pleas for money to finance their journey to the Sydney Forum. Instead, curiously enough, and in response to Darrin ‘The Sleeping Dragon’ Hodge’s dismissal from AF, Saleam has chosen to refer to a comment on my blog made by someone claiming to be Mr. Hodges:

Let us go back to a piece that appeared on FightDemBack! on or about Tuesday, March 13. [To be precise, Monday, March 12: A Discussion Of Difficulties Encountered When Attempting To Effect Change Within Neo-Fascist Organisations in Australia.] Graeme Campbell spoke in Sydney on March 10. This article [to be precise, comment] referred to the meeting as a “failure”, part of a long line of failures and so on under my leadership in the campaign in Cronulla and so forth, with Mr. May being there causing disunion in Australia First etc. The article was signed “Darrin Hodges”.

To cut a too-long story short — Saleam does enjoy his waffles — I’ve got absolutely no idea what Herr Doktor’s diagnosis is, nor do I understand his treatment. Well, apart from intimating, in some vague fashion, that there are dark forces at work behind the scenes which seek to undermine AF — and that Hodges, in some, typically unspecified manner, is somehow embroiled in these nefarious activities. Or: “It seems to me that the issue of Mr. May was raised as another part of a long running campaign against Australia First.”

Oh, and Herr Doktor notes that May will, as usual, be attending the Forum. 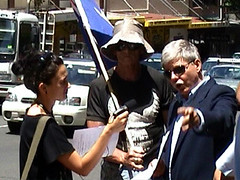 Finally, in a rather comic note, Lilith Peterson, for some bizarre reason best known to herself, imagines that she’s a man, “sick of what is happening to [t]his country… an average bloke [who] works hard [and] has a couple of kids”; one who, like her, is full of complaints, and really “[d]oesn’t like what is going on around him”. Our imaginary Mr. Average then encounters some AF propaganda and, intrigued, googles the name “Jim Saleam”. What does he find? According to Lilith, ‘The Tale of Jack and Jim’, some of Jim’s writings, and an article from the Green Left Weekly.

Well… not quite. Try it yourself and see!

* “Perseverance is printed in Australia, but largely aimed at a Canadian and US readership. Perseverance is a vehicle for the Arrow Cross, the Hungarian fascist and Nazi-collaborationist party of the 1940s. It is edited by elderly members of that group and a second generation of followers. In the pages of 1990s issues of the periodical, can be found an article by the [Canadian League of Rights] (entitled Canadian News), and in another issue, the CLR’s book catalog, sharing the pages with articles by Ernst Zundel, Louis Beam of the Aryan Nations, Robert Miles of the KKK and Identity, as well as articles by the original leadership of the Arrow Cross, and by German Nazi leader Joseph Goebbels…” ~ ‘Jew-haters and red-baiters: The Canadian League of Rights’, David Lethbridge, AntiFa Info-Bulletin, February 2, 1999

I live in Melbourne, Australia. I like anarchy. I don't like nazis. I enjoy eating pizza and drinking beer. I barrack for the greatest football team on Earth: Collingwood Magpies. The 2023 premiership's a cakewalk for the good old Collingwood.
View all posts by @ndy →
This entry was posted in !nataS, Anti-fascism. Bookmark the permalink.