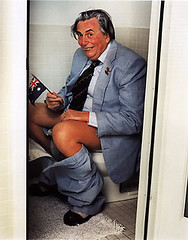 On the one hand, The Controversial Artist Banksy™ sells Barely Legal & Yet Extremely Lucrative product to Aguilera, Jolie and Moss; on the other hand, motherfuckers in New York put street art up against the wall…

The covert campaign targeting street art began about seven months ago, with blobs of paint that appeared overnight, obscuring murals and wheat-pasted art on walls in Brooklyn and Lower Manhattan. Arcane messages were pasted at the sites, but it was difficult to ask for an explanation. The author was never identified…

Yeah well, that’s ‘cos he’s dead right? Funny thing is, unlike Uncle Ted, The Splashers didn’t need to engage in a bombing campaign in order to get their manifesto published. Well, not a real one anyway.

See also : Cynical Picture Emerges In ‘Splasher’ Mystery: Some Smell an Ad Campaign in the Case Of New York City’s Serial Graffiti Defacer, David Segal, Washington Post, March 10, 2007: “Avant-Garde: Advance Scouts for Capital reads the headline. Most [of] the copy is mumbo jumbo like this: “A fetishized action of banality, your work is a trough for the gallery owners and critics”. Who would deface graffiti, of all things? And what is “fetishized action” anyway?”

In a series of essays and in text that appeared under the headline “Interview With Myself” the anonymous authors said that the splashings were committed not by an individual but by a group of men and women, and offered some explanation of their motives.

The authors wrote that street art was “a bourgeoisie-sponsored rebellion” that helped pave the way for gentrification, and called it “utterly impotent politically and fantastically lucrative for everyone involved.”

I live in Melbourne, Australia. I like anarchy. I don't like nazis. I enjoy eating pizza and drinking beer. I barrack for the greatest football team on Earth: Collingwood Magpies. The 2021 premiership's a cakewalk for the good old Collingwood.
View all posts by @ndy →
This entry was posted in !nataS, Anarchism, Art. Bookmark the permalink.

1 Response to Monkeywrenching the Yartz Industry