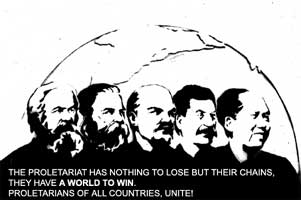 OK, well, ‘gray’ has forced me to complete my analysis of (non-mainstream) ‘left’ Marxist political parties in Australia by turning to the non-Trotskyist Marxist left. Most of these parties appear to be basically Maoist or Stalinist in orientation: all are quite silly (“more gauche than sinister”) in my opinion, in addition to being even scarcer than their Trotskyist counter-parts (a situation somewhat compensated for by their overall wackiness!).

1) Committee for a Revolutionary Communist Party in Australia: The Maoist CRCPA allegedly publishes two papers — Struggle and Rabblerouser — and is allegedly also ‘close’ to the political positions of the Revolutionary Internationalist Movement. As such, it appears to be one of the groups the RIM claims is struggling to form a vanguard Marxist-Leninist-Maoist party, Down Under. In fact, let’s give over the floor to them (or, more likely, him): “We have set ourselves the task of reconstituting the Communist Party of Australia on the basis of Marxism-Leninism-Maoism. Our perspective is one of leading and unleashing the masses to seize power through revolutionary war and [to] establish the dictatorship of the proletariat in Australia.” Once upon a time you could write to this mob at this address: GPO Box 474D, Melbourne, VIC, 3001. Big on ‘People’s War’, the group — assuming that it had more than one member — appears to have emerged briefly in 1996 only to run to the hills in preparation for the struggle ahead shortly thereafter.

2) The Communist Party Advocate(s) are another group whose continued existence has been rumoured but appears not to extend much beyond 1996. An account of the formation of the group may be found here, suggesting that the party should perhaps be renamed the Communist Party of Australia (CPA-ML) where ‘ML’ = ‘Marcus Larsen’, the ‘communist party advocate’ (singular).

3) Communist Party of Australia (CPA). In reality, the CPA are the artists formerly known as the Socialist Party of Australia. The SPA split from the CPA in 1971 (presumably in reaction to news of my birth) only to reclaim the title in an uncontested bout in 1996. The CPA publishes the weekly The Guardian in addition to the journal Australian Marxist Review.

4) Communist Party of Australia (Marxist-Leninist) (CPA-ML) is a Maoist party which publishes the weekly Vanguard. It split from the (Stalinist) CPA all the way back in 1964. As was the fashion in those days, it affixed the term ‘Marxist-Leninist’ to its banner in the hope that the Australian proletariat might thereby flock to it.

5) Marxist Initiative tries to initiate revolution through its publication Australian Socialist. It was formed in 1992 mainly by members of the (now-defunct) Association for Communist Unity (ACU) and is active in the Progressive Labor Party. The group appears to have involved in an abortive attempt in 1997 to establish the New Labour Party, before finally settling on the term Progressive. NB: The ACU was apparently the result of a minority of the SPA’s membership splitting away on the basis of support for the Accord.

6) The National Preparatory Committee of the Marxist-Leninist Communist Party of Australia (or NPCMLCPA for ease of pronunciation) is a Maoist groupuscle which allegedly publishes a rag called Eureka and which gets my vote for most grandiose title (although describing the NPCMLCPA as the Mystery Men of Australia’s fast-disappearing Maoist cult is probably more fitting: “Unlike other superheroes, the Mystery Men are not world famous. They are just ordinary guys trying to be superheroes, albeit not too successfully”).

7) The New Era Communist Party of Australia is an (almost) urban legend, with origins in Queensland.

Must be the heat.

8 1/2) The Communist Left Discussion Circle is a funky bunch, members of which enjoy discussing… Left Communism (especially as one might find it represented in the pages of the ICC’s World Revolution). I remember being quite startled when not one but two members of this group (although admittedly one was a tourist) attended a meeting at Barricade (in 1999?) to discuss ‘Anarchism & Marxism’. Hell, I was so impressed that a pommy bastard had travelled half way ’round the world just to talk to my comrades, I even bought a copy of their paper! Unfortunately, the ICC homepage states that the PO Box for World Revolution (Australia) is “momentarily closed”.

Finally, an honorary mention must be made of Lastsuperpower.net: “A bunch of decayed Marxists and Stalinists in search of a home…”.

I live in Melbourne, Australia. I like anarchy. I don't like nazis. I enjoy eating pizza and drinking beer. I barrack for the greatest football team on Earth: Collingwood Magpies. The 2021 premiership's a cakewalk for the good old Collingwood.
View all posts by @ndy →
This entry was posted in Trot Guide. Bookmark the permalink.