In the US, the Hollywood Nazis belonging to the ‘National Socialist Movement’ (NSM) are planning on holding a rally at the Arizona State Capitol on November 7, 2009. Which is not especially noteworthy, as the NSM regularly assembles tiny numbers of its members to wave flags in public (in Riverside, CA over the weekend, approximately 20 nutzis, with an Honour Guard of local police, faced a crowd of 600 counter-protestors — a few ‘Brown Berets’ managed to have a brief exchange of views), but their latest step on the path to seizing state power has finally — finally! — triggered the inevitable: the formation of an Inglourious Basterds bloc! 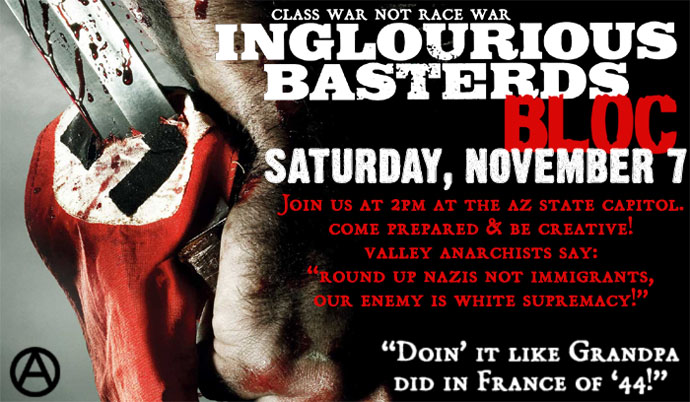 On an even sillier note, earlier this year, Dr James Saleam — the leader of the ‘Australia First Party’ — was interviewed by Carl D. Thompson — Australia’s sole member of the NSM — on his radio show (January 10, 2009).

Previously, Herr Doktor provided the following, highly entertaining profile of silly old Carl. While ‘This article was suspended from [Saleam’s] site on April 3 2005′, it’s so entertaining that it really deserves to be in permanent circulation. Note that Carl got into heap ’em big trouble with ZOG — aka, the ECAJ — a few years ago for publishing some anti-Semitic batshit in the ‘One Nation Party’ newspaper; trouble which got him fired from his job and castigated in court (see : ‘One Nation’s publication of anti-Jewish material declared unlawful in Federal Court’, ECAJ, February 6, 2006).

Anyway, here’s what Jim had to say about Carl before they made nice and Jim was a featured guest on the Hollywood Nazi radio show:

Howl, You Bitch! Time For ‘Howlingdog88’ To Tell Us If He Is ‘Leonard’ The Pornographer, Mental Patient And Pervert!
Neo-Nutzi Brisbane Boss Won’t Last Long After New Revelations!
Jim Saleam

A neo-nazi meeting was supposedly held in Brisbane’s northern suburb of Zillmere on January 30. It was designed ‘to bring white nationalist groups together’ – and otherwise promote a new would-be fuhrer over some genuine youths. However, it seems these youth may get more than they bargained for.

Carl Derrick Thompson writes on Stormfront chat-rooms as ‘Howlingdog88’. He has just been booted from One Nation after his ‘clever infiltration’ caused the shutdown of the party paper, media harassments and other destabilisation. As he tells it, it’s because he has a ‘hard line’ and the ‘softies’ just couldn’t cope. That’s the old, old, story of the nutzi infiltration game. Recently, Mr. Thompson took charge of the ‘White Pride Coalition Of Australia’ (WPCA) Brisbane group after ‘Streicher’ resigned a while ago. The Zillmere meeting was Mr. Thompson’s way of entering into a wider circle – to pollute, twist and corrupt some youth away from any nationalist road – and into the dead-end of neo-nutzism.

However, the tracks are about to fall off his panzer.

Is Carl Thompson – ‘Leonard’? Leonard? Who is Leonard?

I have received from an official of the One Nation party relevant pages from Brendan Shanahan, The Secret History Of The Gold Coast: A Journey Into The Dark Side Of Paradise (Penguin 2004). At pages 118 – 123, we meet a character code-named ‘Leonard’.

His biographical details are identical to Mr. Thompson. ‘Leonard’ is described as follows:

He lives near the Gold Coast; He is married with three children; he was in the Army; he was into witchcraft in its’ ‘black’ and ‘white’ versions; he was a journalist; he was a Satanist; he had a penis enlargement operation; he sold Amway; he sold real-estate; he took a high dose of anti-depressive medication.

Those who know Thompson know these facts – and some others too. Quite clearly, Thompson is Leonard.

Mr. Thompson reveals himself as a man craving some sort of domination or “power”. Quite openly, he recounts that he was heavily involved in the pornography ‘industry’, producing magazines and consuming (sic) pornography himself. He wants to be better than those in the game whom he describes as “liars, thieves, scum suckers”. What disturbed me are the following quotations. The reader may judge them for himself.

This moral filth means that in the mind of Mr. Thompson his version of neo-nazism is on a par with lording over women.

Such a fun family! The children are also aware of father’s ‘business’. Have they been ‘introduced’ to it?

“My daughter, who is ten, told her teacher just recently. And she was fascinated as most young women are about pornography.”

Is Mr. Thompson worried about the criminal element and his business?

“If some organised crime heavy came to lean on me, [I’d] shoot him dead. I’d kill him and then I’d kill his whole family. The government spent a lot of money turning me into a trained killer care of the Australian army.”

Further research into Howlingdog88 reveals that he is a fantasiser of the first order. Carl Thompson is a manic depressive ([b]ipolar [d]isorder) who receives a Disability Support Pension. He takes his medicine, but in the case of any variety of severe [d]epression, medication is not always effective. I would posit a guess that Howlingdog88 is a personality-creation of the ‘high’ period (this period can last for a long time) in his cycle. Once this nutter crashes to earth again, any followers will be left high and dry.

Carl Thompson has phases in his political life in the past. He emerged in shadowy patriotic groups in the early 1980s, did nothing and drifted off. I met him just briefly on two occasions. He went through the groups, poking about to see if there was excitement to be had. But it was all hard work, so he wasn’t interested. Now with neo-nazism, he has a potential to play games, big note, dream in public.

For the nationalists however, this man is dead-dangerous to Australian ‘white nationalist and patriotic’ youth. I do not mean violently dangerous: after all, he was disciplined in the Army for refusing an order that involved hard work, but because such intellect as he retains can cause him to organise events and happenings which could lead them into the arms of the law. He could lead them into a few months of wild activity of no result. Obviously too, if this man is involved in pornography, the criminal element isn’t far behind. No youth needs this complicating factor in his politics!

Fuhrer? I don’t think so. We are dealing with another piece of pathos, part of the sick liberal-capitalist system in decay.

Hitler? Poor old Adolf might well have known how to deal with him!

Finally, note that AF declared in July, and again last month, that it was registering with the AEC, but the AEC has yet to provide any further details.

In the meantime, Saleam (“Saleam [Saa-leem],” I say, “isn’t a very European-sounding name.” “It’s pronounced Saleam [Sail-’em],” he says, correcting me. “Saleam.”) has been profiled in the Good Weekend, has spoken at the Petersham RSL, and last weekend jackbooted his way through Wellington (Aotearoa/New Zealand) alongside of the neo-Nazi ‘National Front New Zealand’.

I live in Melbourne, Australia. I like anarchy. I don't like nazis. I enjoy eating pizza and drinking beer. I barrack for the greatest football team on Earth: Collingwood Magpies. The 2023 premiership's a cakewalk for the good old Collingwood.
View all posts by @ndy →
This entry was posted in !nataS, Anti-fascism, Media, State / Politics and tagged Carl D. Thompson, Dr James Saleam, Inglourious Basterds, National Socialist Movement. Bookmark the permalink.