The BNP’s German pals face their own troubles (Searchlight, March 2008)

GERMANY’S MAIN NAZI organisation, the National Democratic Party (NPD), set itself the objective for 2008 of entering both the Hessen and Niedersachsen regional parliaments. But despite an unprecedented campaign, especially in Niedersachsen, the party failed badly in both regions. The result was a serious setback for the NPD, which has seats in two east German regions but none in the west.

This was only the latest in a series of problems confronting the NPD. Since last summer the party has had to grapple with the so-called Autonomous Nationalists (ANs) who belong to the wider spectrum of militant nazism that goes under the name Freie Kameradschaften.

The ANs notably try to copy the radical left Autonomen, both in their dress style and by skirmishing with the police on demonstrations in an effort to look militant. This behaviour irritates the more sedate law-and-order enthusiasts of the NPD which declared in August 2007 that it did not want people who look like “left anarchists” and frighten the public on its demonstrations.

The NPD is also suffering internal rows. One of the worst stems from a concert held after the nazi Day of Honour ceremony in Budapest on 10 February 2007 at which Norman Bordin, chairman of the NPD’s youth wing, the Junge Nationaldemokraten, in Bavaria, gave a Hitler salute on stage. When Bordin’s act was shown on German television, the party leadership was furious. According to NPD insiders, Udo Voigt, the party leader, drafted an emergency public declaration denouncing Hitler salutes and antisemitic views as not compatible with both the spirit and the letter of the party’s platform and warning that any violations would lead to disciplinary measures, including expulsion.

Although Holger Apfel, the NPD’s deputy leader, watered down the public statement, Klaus Beier, the NPD’s press officer, Frank Schwerdt, its legal spokesman, and Adreas Molau, its educational organiser, felt even that was too much, arguing that the party should only have issued an internal memo about “deviance”.

According to one report, Beier, Schwerdt and Molau commanded majority support on the NPD executive. This enraged Apfel, a moderniser who has been angry for some time about the executive’s soft line towards the nakedly nazi flank of the NPD and has called for drastic measures against “idiots” like Bordin engaging in so-called “NS nonsense”…

Locally, yuppie idiot Welf Herfurth, a former member of the NPD and a current leader of the Sydney-based New Right/National Anarchist groupuscule, is in the process of organising a number of other local fascists to join him on his regular tours of Asia. Otherwise, Herfurth continues to host Dr James Saleam’s annual Sydney Forum, which functions as an annual BBQ for the Australia First Party and assorted other riff-raff. In this capacity he has also attempted, unsuccessfully, to bring into the country other German imports, Udo Voigt (2003) and Gerd Finkenwirth (2005). Fortunately, Australia has some rather strict laws on the importation of toxic materials.

Of course, Herfurth, the amateur Holocaust denialist — along with professional Holocaust denialist Richard Krege — is also notorious for being too much of a Nazi even for Pauline Dancin’ Hanson, who cancelled her scheduled address at last year’s Inverell Forum on the basis of their well-groomed presence. Dr Helen Caldicott, on the other hand, thinks the Inverell Forum — the rural equivalent of Herfurth and Saleam’s Sydney Forum — to be just swell, and spoke there last weekend. While Herfurth didn’t address the masses this year, the New Reich/Notional Anarchists did have a presence, and other speakers included Andrew ‘There’s too many blackfellas’ Fraser and Greg ‘I agree’ Clancy. 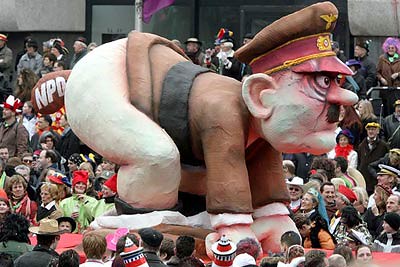 5 Responses to The BNP’s German pals face their own troubles (Searchlight, March 2008)