Reflections on S11 and AWOL 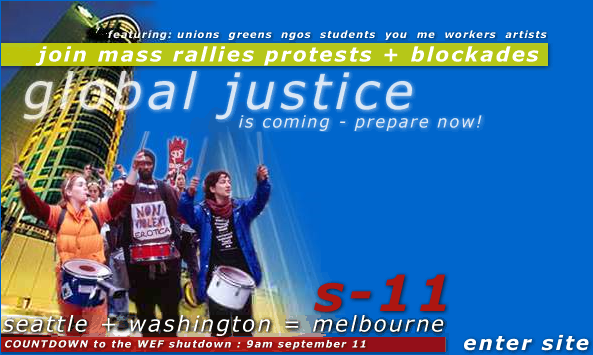 A comrade has written the following and at their request I’m publishing it here to facilitate further disco. Write dr.woooo[at]gmail[dot]com for moar.

Reflections on AWOL and the WEF protests, Melbourne, September 2000

The ‘Autonomous Web of Liberation’ (AWOL) was a Melbourne based ‘networking hub’ that brought people together to share skills, network and exchange ideas in preparation for protests against the World Economic Forum in September 2000. This experience does not have the recognition it deserves, not only in terms of the blockade, but also the later networks that sprang from people having come together at this time, and the wider effects this experience had on their subsequent political practice.

For a long time I’ve been thinking about relaying my experience. I’ve hesitated because I’ve not felt that one person’s perspective can do justice to this subject. Many of us were involved in this experience: at times, up to 100 participated in the meeting/doing/happening that was ‘AWOL’. I’m hopeful that others will seek to collaborate on a larger piece, comment on this one publicly, or write their own story, in order to develop our history and our theory.

I have so many comrades that I still have some contact with who were involved in this project, but also those that span off from it at later times. It is rare I think in political movements over time to have such a sense of shared experience. I still feel that many of you out there got my back, that I can rely on many of you, that I share levels of affinity with many of you that I could not have anticipated at the time. That said, there is a fair bit of hate still around from people who felt left out, or who didn’t have great affinity to begin with, or that grew apart as time went on. There are yet others that I have no idea where they are or what they are up to now, and some I should try to catch up with more. I hope that some of what is said in this ramble will get us asking question about relationships of affinity and questions of organisation, then and now.

There was a sense among us – well, I can only speak for myself really – that the organising method of the ‘S11 Alliance’ was really problematic: it was too slow, it tried to speak for everybody, and meetings didn’t achieve much but rather served as a space for the pursuit of various agendas belonging to various little political parties, fighting about the demands appropriate to a united front. This had very little relationship to my politics, or those of the Seattle events that it claimed to be building on. The authoritarian left really did not get it. Or maybe they did, but wanted to use the rhetoric of Seattle for other ends – mainly building the parties and personality profiles of select others.

Back in early 2000, a number of ‘direct action folk’ – anarchists, autonomists, forest blockaders and other ratbags – had started attending the organising meetings for the protests against the WEF. Many of us found the authoritarian politics of the Alliance impossible to work with, and called a meeting for an alternative networking space. This became S11 AWOL.

Precisely when S11 AWOL began is debatable, as a number of people with roughly the same ideas had meetings at around the same time, but at the first meeting I attended (held in a little tin shed) we wrote ‘Who We Are’, and with some further brainstorming came up with the name AWOL. (“I want the word autonomy to be in it.” “Er, um what about ‘network’?” “Can we use the word web instead?” asked one beloved, bearded forest blockader. Bingo! ‘Autonomous Web of Liberation’: AWOL.) I thought to myself, how funny, this is exactly what we’ve done: gone AWOL from the traditional left.

I was pretty happy with the name and statement of ‘Who We Are’: it focussed on practice and not names or political identities but rather how we organise and what we are against, rather than ‘we are anarchist’ or ‘we are autonomist’ or we are this or that group. In so doing, and with some hard work, it became a very efficient, practical space for getting stuff done for a broad section of largely anti-statist and anti-capitalist types that avoided shit fights between people with very different politics. It changed how I saw things in a big way, and I think for many people in it, the relationships that went onwards into other projects are something we should not forget.

S11 AWOL is non-hierarchical, decentralised and autonomous. It aims to facilitate actions, hold skill-sharing workshops, and empower peoples with information and knowledge, to enable us all to most effectively shut down the World Economic Forum and say NO to global corporatisation and capitalism…

S11 AWOL gives a big thumbs down to those with racist, sexist, ablist, homophobic or nationalistic agendas.

I’d been involved in some stuff when I lived in London – the G8 protests, the ‘carnival against capital’/J18 protests – and we had all been surprised by Seattle. It really felt like something big was kicking off and for several years it did. Then came the slow recuperation and decline of the movement, as well as many of its limitations being reached in the changing times of the ‘war on terror’, the shite politics of the anti-war movement, the rise and fall of the detention centre actions … WorkChoices, followed by global recession, the pseudo-left ‘pink tide’ in Latin America, and now bio-crisis, climate change and the rest.

I’ve had a number of years where I haven’t been involved in much, and I’ve had little new to say: I’ve felt ideologically and practically stuck. For some of the people I still have contact with from this time, I don’t think I’m the only one who feels this way. Maybe some joint reflection will spark some debate and action!

What I took from the experience of AWOL into later stuff, and what I saw carry forward or be altered in later stuff…

Questions Regarding AWOL And The Revolutionary Struggle, Intended To Be Discussed, Corrected, And Principally, Put Into Practice Without Delay…

• Hanging on to the AWOL ‘brand’ after S11. • Falling back into big ‘A’ politics: brand ‘Anarchist’ versus brand ‘Autonomist’. • Anti-media / radical media: questions of representation versus self-imposed silence, infodesks, media-spin games, multiple-name games… • Burnout and networked politics. • ‘What’s my new project?’ activism. • Yoof activism. • Giving up activism. • Where are we now? • What I reckon now / stuff I’d like to be doing now: workers’ enquiry, climate justice, how the experiences of AWOL shaped my current trajectory…

See also : REFLECTIONS ON JUNE 18: discussion papers on the politics of the global day of action in financial centres on June 18th 1999 | Review of ‘Reflections on J18’ – Undercurrent | Reflections and strategies 10 years on from J18 and Seattle 1999.

I live in Melbourne, Australia. I like anarchy. I don't like nazis. I enjoy eating pizza and drinking beer. I barrack for the greatest football team on Earth: Collingwood Magpies. The 2021 premiership's a cakewalk for the good old Collingwood.
View all posts by @ndy →
This entry was posted in Anarchism, Broken Windows, History, Media, State / Politics, Student movement, That's Capitalism!, War on Terror and tagged AWOL, S11, S11-AWOL, World Economic Forum. Bookmark the permalink.

24 Responses to Reflections on S11 and AWOL