BEDEMIR: Exactly! So, logically…
VILLAGER #1: If… she… weighs… the same as a duck… she’s made of wood.
BEDEMIR: And therefore…?
VILLAGER #1: A witch!
CROWD: A witch! 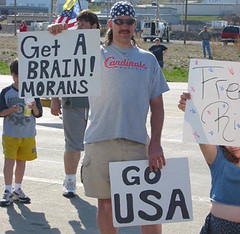 Dr James Saleam — prominent Lebanese-Australian, former member of the ‘National Socialist Party of Australia’ (1970s) and leader of neo-Nazi groupuscule ‘National Action’ (1980s), convicted criminal (for fraud, in 1988, and for organising, in 1989, a shotgun assault upon the home of the ANC representative to Australasia), and current leader of the ‘Australia First Party’ — has some exciting news.*

Several people on this Forum should have an interest in the identity of the primary person who writes as “Andy” on the Slackbastard blogsite.

He is revealed as one Andrew Sadauskas of Melbourne.

Internet searches are only half of the investigative method with such individuals. I was advised tonight that the more regular investigative tools will come into play to provide a more elaborate picture not only of this one person, but the Antifa in general.

I trust the moderator will allow this one post through (given its relevance) despite the usual policy of not debating Antifa etc on this board.

This is not the first time local nutzis have laid claim to knowing the identity of the author of this blog. Indeed, the source for Dr Saleam’s announcement, a blog named ‘Whitelaw Towers’ (WLT), has previously ‘outed’ and ‘named’ the author as being ‘Andrew Moran’. The (principal) author of WLT has previously been identified as being a man from rural Queensland named Jim Perren. Jim briefly came to the attention of The Australian in 2005 (Greg Roberts, Race-hate campaigner unmasked, August 22, 2005), but is otherwise known for being a former member of the now-defunct neo-Nazi ‘White Pride Coalition Australia’ and a current member of the Australia First Party.

On October 16, 2009 (‘@ndy alone and out in the cold. Anti Fa Crocodile Tears’), Jim wrote that I was an art dealer. “For the past four years @ndy, who we have to assume is Andrew Moran Art Dealer in Melbourne (apologies to Mr. Moran if we are wrong)…” On May 15, 2009 (‘Here it is the evil video Support Brendon’), Jim wrote “Yes @ndy Fight Dem Back Victorian founder AKA jew boy Andrew Moran here it is you racist Jewish scum”. On December 29, 2008 (‘Zog Attacks @ndy Slackbastard. Yeah right!’), he wrote “Yes folks because of persistent accusations from this site that Andrew Moran AKA @ndy is nothing but a Zionist spy old @ndy has…” (blah blah blah); on September 25, 2008 (‘Whitelaw Towers: Anarchist @ndy the Government Informer.’), he wrote “Sorta puts @ndy aka Andrew Moran aka slackbastard in a bit of a jam?”.

On September 28, 2009 — a little over a year ago — Jim wrote, in reference to the presence of protesters at that year’s Sydney Forum:

…Seems someone forgot to call them? Or did they? Well Andrew Moran AKA @ndy (yes folks we can confirm that is his real name) had sent one of his little recruits along on Saturday [m]orning…

Of course, that was then, and this is now, and fascist memories being what they are — Holocaust? What’s a Holocaust? — slackbastard’s previous ‘outing’, and the confidence with which it was proclaimed, has been completely forgotten. And now our amateur detective has announced to his neo-Nazi kameraden, fellow members of the Australia First Party, and the wide world of racist kooks, that I am in fact ‘Andrew Sadauskas’.

Naturally, I’ve tried to contact Andrew, but never having met with or spoken to him, and knowing nothing about him other than what Jim Perren has managed to assemble via Google, I’ve not to this point been successful. Sadly, given the obvious desperation with which Jim & Co. have cobbled together their cock-and-bull story — and the murderous joy with which the supposed ‘news’ has been greeted — it may be some time before the sh*t-for-brains at the Australia First Party/Whitelaw Towers, Stormfront, and whichever other “information sites, newsletters and forums” carry this junk realise their stoopid.

So: to reiterate, the author of this blog is not Andrew Sadauskas. A future post will dissect Perren’s claims, and also shine a little further light onto the disturbed minds which have joined in his chorus.

I live in Melbourne, Australia. I like anarchy. I don't like nazis. I enjoy eating pizza and drinking beer. I barrack for the greatest football team on Earth: Collingwood Magpies. The 2023 premiership's a cakewalk for the good old Collingwood.
View all posts by @ndy →
This entry was posted in !nataS, Anti-fascism and tagged Jim Perren, slackbastard, Whitelaw Towers. Bookmark the permalink.

40 Responses to Antifa ‘Slackbastard’ Outed And Named. By Morons.