Two Melbourne teenagers have been convicted of engaging “in a four-day racist rampage” last December. The pair, Julius Medina and Peter Salapura, were members of a larger gang of up to eight yoof what robbed several Indian men “of their wallets and mobile phones, while several were punched and beaten with a metal bar”. News.com.au makes note of the fact that “Medina’s mother, born in the Philippines, and Salapura’s mother, born in Serbia, both wept … as details of their sons’ crimes were read in court”.

“It’s the same hideous, racist behaviour that their parents would have been terrified of when they came here and to see that their children are behaving in the same way to migrants must be almost too terrible to bear,” Judge Gaynor said.

Which may or may not be true. But it’s hardly unique, nor even unusual: the reasons why some individuals (especially male yoof) find ethnic or racial animosity sufficient motivation to assault others, or choose to employ ‘racist’ beliefs to rationalise their behaviour — and others don’t — are often quite complex. Thus it may seem odd that two of the most notorious Australian neo-Nazi leaders of the last few decades are of non-White or ‘mixed race’ descent, but this certainly didn’t prevent either man from espousing a return to White Australia, or of recruiting a small number of followers on that basis. (Note that while ‘Java’ Jack van Tongeren has retired from political life, Dr James Saleam is still actively pursuing his dream of a White Australia: see ‘Australia First denies racist mailbox flyers’, Soraiya Fuda, Campbelltown Macarthur Advertiser, November 10, 2010).

By the same token, former academic Andrew Fraser, a recent proponent of the same policy, was born and raised in Canada; the leader of Volksfront Australia, Welf Herfurth, was born in Germany; many of the most outspoken critics of Australian immigration and multicultural policy are also foreign-born; Pauline Hanson attracted the support of immigrants and their children (including, notably, a ‘de-wogged’ John Pasquerelli); the ‘Australian Defence League’ and similar formations experience a relatively high level of participation from them foreigners what cause trouble…

And so on and so forth.

Prosecutor Amelia Macknay told the court the group discussed going “Punji hunting” before setting out to rob the Indian men.

“These were group attacks on vulnerable victims who are minding their own business at night,” Ms Macknay said.

Defence lawyer Chris McLennan, for Medina, told the court the attacks were not racially motivated.

“They targeted these victims because they are peace-loving and they probably have more expensive equipment,” Mr McLennan said. 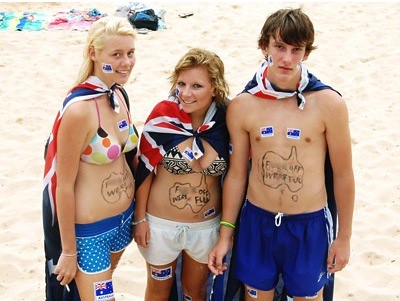 I live in Melbourne, Australia. I like anarchy. I don't like nazis. I enjoy eating pizza and drinking beer. I barrack for the greatest football team on Earth: Collingwood Magpies. The 2023 premiership's a cakewalk for the good old Collingwood.
View all posts by @ndy →
This entry was posted in Broken Windows, State / Politics, That's Capitalism! and tagged Fuck Off We're Full!. Bookmark the permalink.