For what it’s worth (which may not be much), I thought I’d write down a few thoughts I had following the Union and Community Summer School 2010 held at Trades Hall on December 10/11. I only attended part of the conference, and thus am presenting only a (very) partial account. No doubt there’ll be other, more complete accounts in the weeks ahead, and I’ll link to them as and when I discover them. Otherwise, a series of proposals was agreed to at the end of the conference, and the School will take place again next year.

To begin with, the conference brought together activists and union officials from across the non-ALP Left in an attempt to reinvigorate debate within these ranks. [1] Disillusionment in the Labor Party is hardly a novelty, and criticisms of its machinations have been articulated many times before. [2] But recent years have, arguably, witnessed the beginnings of what may be a permanent break between the ALP and The Australian Left™, and thus an opportunity for leftists in the Australian labour movement to seriously re-consider their political strategies. [3]

A few key themes were present in the program and animated much of the discussion: principally, the relationship between the trade unions (and the labour movement generally) and the ALP. Beyond this, Dave Kerin summarises the School’s intent as follows:

Most left political traditions will take part in the school, which aims to strengthen unity on issues for which there is agreement. The approach will be one of problem-solving. To usefully tackle the big challenges confronting the union movement — such as the fight against anti-union laws and the struggle for a sustainable economy — … setting out the concrete questions these challenges pose to unions and labour movement activists.

The thoughts of some other participants–Rob Durbridge, president of the SEARCH Foundation, Shirley Winton of the Spirit of Eureka (Melbourne), and Susan Price, Socialist Alliance national trade union coordinator–may be found in ‘Can the union left build greater unity?’, Green Left Weekly, December 5, 2010.

As is common knowledge, while there are exceptions, on a national level trade unions are in decline in terms of membership, as well as influence. (The exceptions are industrial and occupational, gendered and generational.) The reasons for this are many, and may be found in the changing nature of Australian political economy–the decline in full-time jobs, the rise in tertiary industry and so on–but also, and of greater relevance in this context, the declining industrial utility of unions. That is, the extent to which unions–in the face of an incipient economic crisis, hamstrung by the recent introduction of anti-unions laws, and suffering from a longer-term political decline–find it difficult not only to carry out their otherwise routine function but to retain existing memberships, acquire new members, and continue to pursue a broadly ‘social democratic’ vision. The super duper love unions which resulted from the forced amlgamations of the late 1980s and early 1990s have been super for some… but not very many. [4]

In terms of the current malaise, and how it came to be, all the usual suspects featured in the line-up: the ALP, of course, which controls the trade unions, and does so in its own, particular interests–interests which even Blind Freddy can see are not necessarily in accord with those of trade union memberships, the labour movement, or the working class as a whole; the historical legacy of the Accord, which gutted the unions and coincided with the destruction of the few unions which failed to recognise its enormous benefits; and the subsequent establishment of a repressive legal framework (WorkChoices/Fair Work) by successive Coalition and Labor Governments, the jewel in the crown of which is the ABCC. The two recent trade union campaigns which were referred to in (largely) positive terms were the MUA dispute (April–June 1998) and the campaign against WorkChoices (2005–2007) aka the campaign to get Labor re-elected.

In real terms, both I think can be considered nominal failures.

Thus while the MUA dispute [5] did succeed in mobilising large segments of the labour movement and the public generally to defend the MUA, management did eventually manage to realise most if not all of its goals. And while the 2007 election was won by Labor, the new industrial relations framework the triumphant government adopted is different to the one the previous mob instituted only in degree rather than kind. Having largely fulfilled its function, the ACTU’s “Your Rights at Work” campaign has become largely moribund.

The Australian Building and Construction Commission (ABCC) (which allegedly costs The Australian Taxpayer $35 million a year to fund and—D’oh!–narrowly avoided triggering an industrial dispute through the eventually unsuccessful–fnarr fnarr–prosecution/persecution of Adelaide unionist Ark Tribe) came in for particular criticism, as did the ALP’s continued support for it. In fact, in labour terms, the case against the ABCC is a Lay Down Misère, which is one reason why Labor’s failure to abolish it has generated so much sound and fury.

Something like 250 people attended the conference, but the only note of real anger I saw (but likely not the only one expressed) was when someone spoke of the pressures those working in the community sector face, and the general reluctance of workers in the sector to take industrial action; not because workers enjoy low wages and poor conditions (including stress and a resulting very high turnover rate), but because doing so disadvantages their clients (aka the poors). [6] 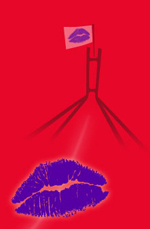 After many months spent virtually kissing Joolya’s arse (the img above being of the postcard workers were encouraged by the ASU to send Joolya ahead of the 2010 Federal election), the ASU’s ‘Pay Up’ campaign has to nobody’s surprise flopped: the Government declaring that, because it will simply cost too much, it will no longer be supporting the union’s wage case. [7] (The ‘Pay Up’ campaign was preceded by another flop titled ‘Respect The Workers Sustain The Services’). [8] A “furious” union has declared that on Thursday, December 15, the ASU and other unionists will be conducting rallies–“the biggest mobilisation for Equal Pay in history!”–in the vain hope that this might alter Joolya’s mind.

Or perhaps not. Given plummeting approval ratings–not least as a result of some rather unfortunate remarks on the potential prosecution/real persecution of Julian Assange–Joolya might be moved to try and salvage some respect in the eyes of a feminised workforce, and in some other way sustain the hope of a better deal for the 200,000 workers in the social and community services sector. [9] In any case, Joolya herself manages to scrape by on a measly annual salary of $354,671 (plus bonuses!).

There was also some disco at the conference on Union Solidarity / Workers Solidarity Network. Rather than write some blah blah blah of my own, here’s links to a few articles which debate some of the issues raised by such networks in the context of radical struggles against capitalism: Pro-revolutionaries & trade unions, Anthony Hayes, Mutiny, No.49, April 2010 | Radical Unionism, Lindsay Hawkins, Mutiny, No.51, June 2010 | Against Capital; Against Work, Anthony Hayes, Mutiny, No.55, October 2010 | A perspective on directions in 2011, Liz Turner, Renegade News, No.2, 2010 [not available online].

Who knows, I might even live to see it.

[1] Note that the conference was also attended by current, former, recovering and (presumably) future ALP members, non-aligned activists, and various leftists and socialists of one stripe or another.
[2] Vere Gordon Childe’s 1923 essay ‘How Labour Governs’ is a notable case. The IWW and other, earlier socialist political formations also had some choice words for this ghastly political machine (the internal workings of which that slack bastard Mark Latham recently and memorably dissected in his Diaries); the IWW’s ghost continues to haunt the labour movement.
[3] ACTU President Ged Kearney has recently expressed some mild criticism of the ALP (October 13, 2010). This break–at this point, hairline fracture–is also obviously contingent upon the continued ability of the Greens, and its embrace of a more progressive industrial relations policy, to act as an alternative pole of attraction for unionists.
[4] See : ‘After Labourism: The Neoliberal Turn by Labor Parties and the Response by Trade Unions’, Jason Schulman, 2009 (PDF). See also : “A dose of libertarianism would enhance our democracy” — and if my aunt had balls, she’d be my uncle.
[5] See : ‘War on the Waterfront’, Tom Bramble, Brisbane Defend Our Unions Committee, October 1998 and elsewhere on Takver’s Soapbox; What was the “victory” on the Australian waterfront?, Terry Cook, wsws.org, April 13, 1999.
[6] See : Deborah Robinson, Gender pay gap costs Australia $93 billion each year, Australian Women Online, March 15, 2010; Why are women still paid less than men?, ABC, June 11, 2010. Lots of disco on the subject @ Larvatus Prodeo (Gillard betrays low paid workers, Kim, November 19, 2010).
[7] Alex White, among other ALP members, reckons it was a bad decision (November 19, 2010); a worker from the DVRVC explains the relevance of the case here (December 7, 2010). Note that in Queensland the ETU–which is also reportedly “furious” at the State government’s selling off state/public assets–has threatened to form its own party (Anna Bligh ‘has lost the plot and is ‘behaving like Sir Joh’ says union leader, December 6, 2010). The “extremist and militant”–but otherwise remarkably civil, seemingly honest, and even entertaining–Peter Simpson was one of a number of former(?) True Believers to address the conference.
[8] See : ‘Behind the ACTU’s latest pay equity ‘campaign”, Linda Waldron, Direct Action, No.22, May 2010.
[9] The Australian Community Sector Survey Report 2010 (PDF) provides some useful data on the sector, employment, funding and conditions.

I live in Melbourne, Australia. I like anarchy. I don't like nazis. I enjoy eating pizza and drinking beer. I barrack for the greatest football team on Earth: Collingwood Magpies. The 2020 premiership's a cakewalk for the good old Collingwood.
View all posts by @ndy →
This entry was posted in State / Politics, That's Capitalism! and tagged Union & Community Summer School 2010. Bookmark the permalink.