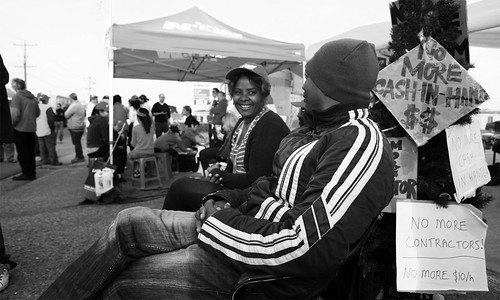 The strike at the Baiada chicken factory in Laverton, which began on Wednesday November 9, is now almost six days old. On Sunday, a meeting between NUW officials and Baiada management failed to achieve a resolution to the dispute, and so a union and community picket at the factory at 17–19 Pipe Road continues.

While Right-thinking North Shore gels remain appalled by the evil games of unionists, in reality the strike was triggered by Baiada’s insistence that it continue to pay contractors, cash-in-hand and labour hire workers lower wages than permanent workers (who labour in even worse conditions than does the permanent workforce). The company also demanded the right to sack workers if, after being given just 48 hours notice, they were unable to work assigned hours, to force workers to work Saturdays on normal rates, and to pay workers injured on site just 80% of their weekly wage. The working conditions at Baiada are further discussed in Paltry sums for poultry workers (Goya Dmytryshchak, Brimbank Weekly, November 8, 2011).

Baiada Poultry is a private company owned by the Baiada family, and is ranked among the largest private companies in Australia. The Baiada family’s wealth was estimated at $495 million by Business Review Weekly in June 2011, and the company had revenue in 2009-2010 totalling $1,195 million. (Its chief customer is Coles, whose CEO, Ian McLeod, pocketed a $15.6 million pay cheque for 2010-11.) The company is managed by a board of directors: its Managing Director, John Camilleri, is founder Charles Baiada’s grandson. Camilleri is also on the board of the Australian Turf Club, and uses some of the money he gains from chickens to invest in horses. One of his horses, Macedonian, has thus far won $414,276 in prize money–which is $314,276 more than WorkCover fined Baiada after it was “convicted and fined for safety failings which led to the death of Saint Albans man, Mario Azzopardi around 3.15am on 5 December 2005”.

The industrial action at the Laverton factory is beginning to have effects upon the supply of chickens to Baiada’s customers. As a result, the company has been insisting that workers at its Adelaide factory perform overtime, which they have refused. Consequently, a large number of these workers are reported to have been sacked. Participants in Occupy Sydney have supported the striking Baiada poultry workers by briefly occupying a Coles supermarket in Sydney’s CBD, while Occupy Melbourne supporters are taking part in an action later today in Melbourne’s CBD.

Every year, hundreds of millions of chickens are slaughtered for their meat in Australia, and the conditions in which they are bred has created a niche market for those concerned for their welfare. In 2002, Baiada launched a new range of chicken branded ‘Lilydale Select Free Range Chicken’. Notwithstanding its propaganda regarding the many freedoms its Lilydale chickens enjoy, the company is one of a number of chicken producers currently being sued by the ACCC, which alleges “misleading or deceptive conduct in relation to the promotion and supply of chicken products”. In June 2010, the company sued Patty Mark and Animal Liberation Victoria for trespass/damages/exemplary damages/costs in relation to trespass on their broiler chicken factory near Werribee; actions which helped to expose the conditions under which chickens at the company’s Pankhurst Farms are bred. ALV has also been active in rescuing stranded birds from the factory in Laverton.

Wages are poultry and life is fowl. 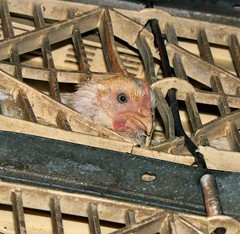 I live in Melbourne, Australia. I like anarchy. I don't like nazis. I enjoy eating pizza and drinking beer. I barrack for the greatest football team on Earth: Collingwood Magpies. The 2020 premiership's a cakewalk for the good old Collingwood.
View all posts by @ndy →
This entry was posted in State / Politics, That's Capitalism! and tagged Baiada Poultry, John Camilleri. Bookmark the permalink.

3 Responses to Baiada and corporate predation