A Federal Court case alleging that in crushing #omel council and police broke Over 9,000 rights will recommence today @ 2.15pm (tho’ I can’t find the listing). Mostly, the case has to do with the right of a person (or persons) to be able to assemble in public and to talk politics without being hit over the head or stripped of their clothing (and stuff) just ’cause Robert Doyle doesn’t like what you have to say or wear.

The case has been brought by James Muldoon and Sara Kerrison and is supported by various other participants in Occupy Melbourne; Quincy MD Merkel QC, inter alia, is arguing that it’s the Constitution, it’s Mabo, it’s justice, it’s law, it’s the vibe and — No, that’s it. It’s the vibe. (And the Victorian Charter of Human Rights.)

The case began on Wednesday and is expected to conclude this week before Justice North makes up his mind. As for the eventual winner, my money’s on The Man. That said, I really don’t have that much money, and my only real hope is that the following questions are addressed: 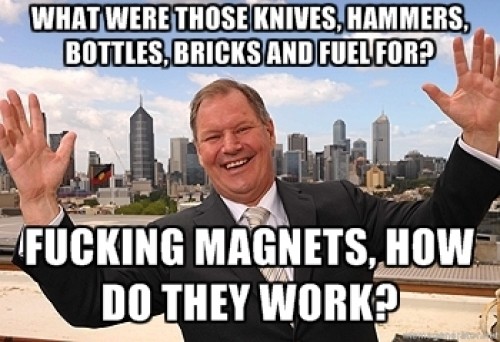 Fun fact: ‘Operation Dangle’ was the name VicPol gave to its use as an auxilliary force by Doyle & Co.

PS. Occupy continues every Friday in the Square. Live twittering of the case is kindly being provided by Occupy Melbourne.
PPS. Police are having heaps of fun evicting filthy tent-dwellers in Perf too.

I live in Melbourne, Australia. I like anarchy. I don't like nazis. I enjoy eating pizza and drinking beer. I barrack for the greatest football team on Earth: Collingwood Magpies. The 2021 premiership's a cakewalk for the good old Collingwood.
View all posts by @ndy →
This entry was posted in State / Politics and tagged Occupy Melbourne. Bookmark the permalink.