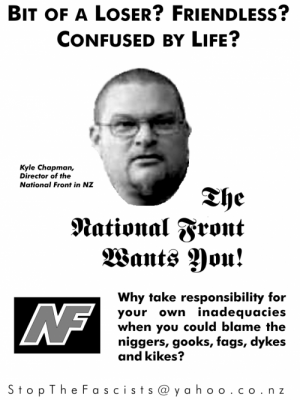 Despite being an Aussie invention, ‘White Pride World Wide’ (WPWW) Day seems to have only really registered among boneheads in two other former British colonies: Canada and New Zealand(/Aotearoa). To celebrate the historic occasion, in Canada, two tiny groups of boneheads took to the streets in Edmonton (Alberta) and London (Ontario) this weekend; in Aotearoa/New Zealand, former Hammerskin/NZNF fuehrer, Mormon, and always-outrageous Kyle Chapman led a few score of his followers on a march through Christchurch.

EDMONTON — A white pride rally in Edmonton’s downtown lasted only minutes when the demonstrators fled into a subway stairwell after they were greeted by over 100 anti-racist counter-protesters.

LONDON – An expected ‘white pride’ rally outside London city hall drew a large crowd Saturday afternoon — but one marching under an anti-racism banner.

Kyle likes to boast about how Christchurch is a White Power town but, as the following, ‘choice’, amateur footage suggests, some folks don’t appear to have gotten the message…

I live in Melbourne, Australia. I like anarchy. I don't like nazis. I enjoy eating pizza and drinking beer. I barrack for the greatest football team on Earth: Collingwood Magpies. The 2023 premiership's a cakewalk for the good old Collingwood.
View all posts by @ndy →
This entry was posted in !nataS, Anti-fascism, History, State / Politics and tagged White Power!, White Pride World Wide Day, whiteness. Bookmark the permalink.