Dear La Trobe student, Protest is baaad. Get it?

Update : ‘Students from the “Stop the HUSS Cuts Collective” have voted to occupy the La Trobe University campus in Bundoora indefinitely, starting tonight.’ In which case, students have gotten really really REALLY big in recent years, or you can find some occupying students in the Agora. In either event, check the Occupy LaTrobe blog for more infos.

Seemingly stung into action by the political bastardry of Labor students at Monash University (or perhaps not), La Trobe University Vice-Chancellor Professor Paul Dewar (formerly Provost at the University of Melbourne) has declared WAR! on student protest: from now until Open Day (August 26), unauthorised public protest by ungrateful students is strictly verboten — on pain of death expulsion.

STUDENTS at La Trobe University could be suspended or expelled for protesting on campus without permission until after the university’s Open Day.

La Trobe vice-chancellor John Dewar emailed all students yesterday afternoon, advising them they would have to get approval from the university at least 24 hours before any protest until next Friday…

I haven’t read the email but if someone would like to send it to me, please do. 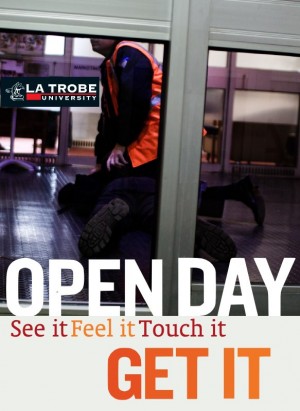 Appointed in January 2012, regarding Dewar’s appointment the Chancellor, Adrienne E Clarke, announced that:

Professor Dewar joins the University at a time of critical change and challenge in the Australian higher education system. His leadership will build on the foundations established by the former Vice-Chancellor Professor Paul Johnson, which has included revitalising the Bundoora and Bendigo campuses and identifying the University’s strategic priorities…

Translated from academese into plain English, of late ‘change’ and ‘challenge’ has meant, inter alia, the abolition of approximately 500 subjects and the sacking of 40 staff in the Faculty of Humanities & Social Sciences. These changes will prove to be quite a challenge to those students interested in studying art history, gender, sexuality, Indonesian, linguistics, religion, spirituality and all the other, equally-useless subjects best kept the near-exclusive domain of middle class students at Melbourne (or possibly Monash). (NB. On August 15, the University’s media unit announced that ‘Linguistics, Indonesian, Art History and Gender, Sexuality & Diversity Studies’ will still be available.)

Amusingly, the law-talking guy from Oxford University (by way of Griffith and Melbourne) claimed upon his appointment:

One of La Trobe’s greatest assets is the contribution it makes to regional Victoria. I look forward to engaging with staff and students and key community groups in Bundoora and throughout our regional campuses in coming weeks and months…

The engagement has proven to be a fruitful one and Dewar has made his own contribution by presiding over the further dismantling of higher education in regional Victoria, cutting staff at campuses at Wodonga and Shepparton. An “exasperated” Stefano de Pieri is not. happy at the progress being made, resigning his place on the Mildura campus Board.

Sadly, the reaction of some students has been to protest these changes, the unlearned yoof failing to appreciate the political lessons being taught. To that end, a rally has been organised for 10am on Sunday, August 26 on the corner of Kingsbury Drive and Plenty Road (near one of the entrances to the University) and a list of demands issued by the ‘Stop the HUSS Cuts collective’:

• No cuts to the Faculty of Humanities and Social Sciences;
• The University enter into open and honest negotiations with the NTEU;
• Instead of budgeting to cut staff and subjects, the university focus on retaining staff;
• The VC, other members of University Council and senior management take cuts to their pay; the money saved to be spent on retaining staff and subjects in the HUSS Faculty.

I live in Melbourne, Australia. I like anarchy. I don't like nazis. I enjoy eating pizza and drinking beer. I barrack for the greatest football team on Earth: Collingwood Magpies. The 2021 premiership's a cakewalk for the good old Collingwood.
View all posts by @ndy →
This entry was posted in !nataS, State / Politics, Student movement, That's Capitalism! and tagged La Trobe University, Professor Paul Dewar. Bookmark the permalink.

12 Responses to Dear La Trobe student, Protest is baaad. Get it?