Kill Rock *s : starting with Geldof, and ending with Hanna 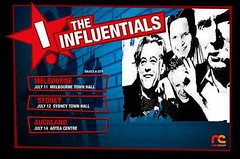 ‘Geldof cancels Italian tour after only 45 fans turn up for Milan gig’
Barbara McMahon in Rome
The Guardian
July 24, 2006

Millions of people [allegedly] like to hear Bob Geldof talk about causes as diverse as debt relief and the rights of fathers but it seems not so many, at least in Italy, are as keen to hear him sing.

The Irish rock musician and political activist beat a retreat back to London at the weekend after cancelling concerts in Milan and Rome because too few fans had bought tickets.

Only 45 people turned up on Friday at Milan’s Civic Arena for a performance by the 51-year-old singer and songwriter. The venue has a capacity of 12,000.

I can tell Sir Bob why we don’t like his concerts.

His music’s shit. (Unlike, say, Le Tigre. In fact, their music is now considered so entertaining by the corporate sector, the grrls have sold it. First to Universal, then Telus, then Goldmark, and now Nivea. Obviously, “Sometimes it’s hard to be a woman / giving all your love to just one corporation…”)

As for Sir Bob’s politics…

A month ago, advertising teacher (sorry: “guru”) Simon Hammond’s book BE was featured in an article in The Australian, ‘Believe in your brand’: “In the book he explains that BE brands are those with “belief” that customers want to “belong” to and that inspire core emotional “behaviours”. Loyalty is important among these.” Better yet: “People like Robbie Williams, Bono, Sting and Geldof are the true influences because they are perfect BE brands.”

Not to be outdone, red carpet — the mob that organised The Influentials brief tour of Australasia — describe The Influentials thusly: “Whilst humanity numbers over 6 billion, the most important changes in the [worlds] of media, technology, brands, ideas, economics and politics are the work of just a few. These extraordinary individuals are The Influentials – Leaders, Rebels and Superstars.”

Well… maybe not. Having bombed in Milan, Bob bombed in Melbourne too. (Maybe it’s got something to do with cities beginning with the letter ‘M’?)

But the group dubbed “The Influentials”, it seems, is not so influential.

Fuck. Don’t tell me that there’s a world outside of the masturbatory phantasies of advertising “gurus”? Sad but true: The Influentials exercised little influence over the good burghers of Melbourne, the dog and pony show attracting a small audience only on its Sydney and Auckland legs:

Sir Bob Geldof was quick to condemn New Zealand’s foreign aid contribution – but he was happy to fly home with a healthy appearance fee and a CD of copied New Zealand bands’ music. Television presenter John Campbell gave Geldof a CD compilation of local songs, which the Boomtown Rats frontman and activist packed into his suitcase before he left Auckland on Friday night…

Geldof was in Auckland to speak at a motivational business leadership conference at the Aotea Centre on Friday, after which he criticised New Zealand for its level of foreign aid contributions. He told the Herald on Sunday he didn’t know how much money he would receive for speaking at the function which charged punters $1495 per ticket. He laughed at suggestions he would donate the proceeds to charity. 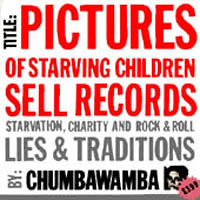 Geldof, lamenting the fact that he couldn’t make any big money out of the pop-music business, said: “I wanted to make money out of it, but I only ever wanted the money to enable me to do all the things I want to do” (TV Times, 25-31 October, 1986). Have you ever heard of anyone wanting to make money to do things they didn’t want to do?

For years before Band Aid, Geldof’s band, The Boomtown Rats, had been a flop. In his so-called autobiography Is That It? he wrote that they’d made an album In The Long Grass — but it was no-go. Tracks released from it as singles — “total stiffs”. “We even went and tried to hype the second single.” They got £1,000 and “went to all the stores we knew were ‘chart return’ shops and bought it ourselves, hoping to buy it into the charts” (p.267). But it didn’t work. “We gave away a free ticket to any one of our concerts with every copy…”. Still no good. “We made four superb videos… But still nothing” (p.268). He then writes that he was getting desperate. “It was coming to the end of 1984 and I could see no prospect for the release of the album In The Long Grass… I went home in a state of blank resignation and switched on the television” (p.269). He saw the BBC film on famine in Ethiopia. Almost immediately he also saw the opportunity of the charity business bringing big publicity, and a way at last to make money ‘to enable him to do the things he wants to do’.

He knew he was well on that way when he arrived at Buckingham Palace on July 24, 1986. There, dolled up in top hat and morning dress — the uniform [deemed] appropriate [to receive] medals for service to the middle class — he was able to bow and scrape to the Queen of parasites as she officially installed him as Knight Commander of the Order of the British Empire.

The squalid hypocrisy of an ‘Order of the British Empire’ — the building of which was a series of atrocities substantially responsible for the immense suffering of African peoples right up to the present day — no more deterred Geldof’s drooling acceptance of it than does any of the other phony do-gooders. On the contrary, his adulation of the Royals sometimes gets near to the extreme. In Is That It? (p.411) he says: “Of all the people I have met since this [Band Aid] began, Prince Charles is without doubt the one I have been most impressed by. I find myself more in agreement with him than anbody else.”

Then the money started to roll in. One of the little things he wanted to do was to get married to Paula Yates — the hip, boring, middle class pop robot [since deceased]. So in September 1986, out in some exotic place, he spent over £75,000 on a “quiet little wedding”. Only a month later, the aforementioned book was published — with Geldof’s name spread across the top of the front cover, aptly in the largest, gold letters — amidst a welter of publicity. This was followed by a successful “tour to packed houses in major venues”, each gig ending with the Band Aid song Do They Know It’s Christmas?. A successful tour due, as he admits (p.319) entirely to publicity through Band Aid. There was then a recording contract, an album, a rubbishy single in the charts, a pop video, appearances on TV chat shows (he’d earlier been on This Is Your Life), interviews in newspapers and magazines, and he “got rows of honours, medals, awards, and even honorary degrees, from all over the world” (p.426).

In fact, the middle class, liberal to fascist, swarmed around Geldof and his Band-wagon like flies ’round shit — and the reasons why range from feelings of guilt to unscrupulous exploitation. For example, among the flies that got a good lick of the shit were US TNCs AT&T and Kodak. The purpose of their frenzied participation in these ‘Aids’ was made clear by Dan Hovicky, ‘advertising expert’ and Division Manager of AT&T. Speaking on Channel 4 (February 19, 1987) of AT&T’s involvement with Live Aid and Sport Aid, Hovicky said: “It was a great opportunity to show to all those who matter in the world, our technical skills, abilities and services. It was of exceptional use to us because it enabled us to put it all over while at the same time giving a clear impression that we cared”.

[*Class War reckons Andy “was a self-confessed former US and British intelligence officer”!]

Anyway, they say nobody can find a good word for Bob, but I can :

Bono, the 80’s inspired politico warbler is the latest in a long line of performers who are trotted out on behalf of the power holders. Poor Bono, he doesn’t get it. At first I thought he looked silly. But now I see him as dangerous. Okay, well, silly and dangerous. At least that’s how he looked at the World Economic Forum held recently in New York. “Bono steals spotlight at forum,” said the Globe and Mail byline of February 5. While distribution of the Earth Times may have been banned at the exclusive Waldorf-Astoria for the WEF the corporate and political elite made a home for Bono.

Admittedly, I have never been a fan. Bono has always seemed a little pompous and overblown to me. But what the heck, pop music is aural candy. The candy I can live with. What was more alarming was to see Irish pop stars Bob Geldof and Bono praising the Canadian Prime Minister in Genoa during the G-8 meetings last year. Meanwhile, on the other side of the barricades Carlo Giuliani was shot and killed by a police bullet. Police routinely attacked independent journalists, medics and protestors, as has become a routine practice in crowd control.

I live in Melbourne, Australia. I like anarchy. I don't like nazis. I enjoy eating pizza and drinking beer. I barrack for the greatest football team on Earth: Collingwood Magpies. The 2021 premiership's a cakewalk for the good old Collingwood.
View all posts by @ndy →
This entry was posted in Media, Music, State / Politics. Bookmark the permalink.