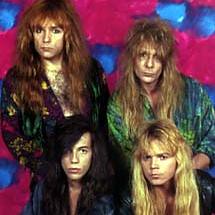 ‘Inspired’ by the forthcoming release of a documentary film about heavy metal, from the Department of Extremely-Late-Breaking-News comes the following:

SAN FRANCISCO – Heavy metal singer Chris Barnes didn’t know what people would think of the anti-war song “Amerika the Brutal” he wrote after his cousin deployed to Iraq in 2003.

He heard a number of complaints – but also received supportive e-mails from American troops in the war zone.

“It kind of sent a shiver up my spine because those are the guys I didn’t want to offend by sounding anti-war,” said Barnes, vocalist for the death metal band Six Feet Under.

Lamb of God‘s albums criticize American foreign policy. Cattle Decapitation are ardent vegetarians who use explicit album covers and songs like “Veal and the Cult of Torture” to condemn the meat industry. Serj Tankian of System of a Down is co-founder of a nonprofit organization that works on social issues.

More than three decades after Black Sabbath conjured images of the dark arts, heavy metal is growing up. The genre is increasingly incorporating social and political messages into its dense power chords.

In reality, this is nothing new. In fact, ‘grown-up’ (self-consciously ‘political’) heavy metal has been around for at least two decades. Summarising Deena Weinstein’s book (“the first real academic book on metal”), Heavy Metal: A Cultural Sociology (1991), A.S. Van Dorston writes:

[Weinstein] codes heavy metal history into a dialogic process, an ongoing historical conversation stratified into five eras. It erupts from 1969 to 1972, begins to crystallize from 1973 to 1975, reaching a golden age of full crystallization from 1976 to 1979. Then from 1979 to 1983 it undergoes a surge of growth, increasing in complexity and expanding its boundaries. After 1983 it fragments into subgenres… When metal fragmented into subgenres in 1983, the differences in lyrical themes were identifiable. For instance, lite/pop/hair metal introduced more common themes of love and lust, while underground thrash metal avoided sex and drugs (other than occasional anti-drug songs), and focused on forms of protest songs addressing politics, the environment and animal rights.

“We’ve always had a lot of crazy crossover going on,” he says before a recent show at Pound SF, a club in an industrial section of San Francisco. “It’s a pretty diverse crowd we have. I’ve never known what to make of it.”

Twenty artists recently displayed art inspired by the band’s last album Humanure, in an online exhibit. Proceeds from sales of the art will be donated to animal rights causes.

Metal bands are also branching out into literature and mythology.

Oddly enough, this is also nothing new. In fact, it’s been a staple of the genre since its inception.

Mastodon, which is headlining a summer tour with metal stalwart Slayer, patterned the concept album Leviathan around the story of Moby Dick. Death metal band Nile bases its songs and image around Egyptian mythology and iconography.

“Metal is expanding and evolving and becoming more diverse,” said Canadian anthropologist and filmmaker Sam Dunn, who directed Metal: A Headbanger’s Journey, released on DVD this summer. “It’s at a much more vibrant state than it was even five or 10 years ago.”

Dunn is working on a sequel to the film with the working title Global Metal which will trace the popularity of metal overseas, especially in developing countries like Brazil, Columbia and Indonesia.

“It’s becoming global and it’s becoming a tool for social and political commentary,” Dunn said. “It takes on a greater meaning in countries where people have had to struggle to survive. It takes on a much stronger political tone.”

Metal artists “have responded to the culture and politics of the day,” said Donna Gaines, a sociologist and author of Teenage Wasteland, a study of working class New Jersey metalheads.

Metal music in the 1980s was often homophobic and “very white,” she said, but current bands tend to be socially conscious and suspicious of political power. There’s also more women in the audience – and fronting the bands.

“This is another generation rising,” Gaines said.

Heavy metal has always touched on social and political issues. Metal grandfathers Black Sabbath criticized the Vietnam War in songs like “War Pigs” and “Children of the Grave.” Iron Maiden‘s “Run to the Hills” was an angry denunciation of the displacement of Native Americans.

But much of the criticism was blunted by dark imagery that panicked parents and led to the now ubiquitous “Parental Advisory” labels. Metal’s punk brethren were seen as having a more learned world view.

That began to change when hardcore punk and metal fused in the late 1980s with bands like Dirty Rotten Imbeciles and Nuclear Assault. But metal was still primarily known for the excessive lifestyles and racy videos of glam bands.

Punk and metal began to ‘crossover’ from at least the early 1980s; DRI and Nuclear Assault are just as often described as ‘speed’ or ‘thrash metal’ (not to be confused with grindcore, doom metal, stoner metal, sludge metal, alternative metal, nu metal, industrial metal, rap metal, neo-classical metal, progressive metal, goth metal, hardcore [punk] metal, symphonic black metal, or power metal…). Further, notwithstanding the fact that many of the early punk bands that survived to the mid-80s began to struggle with their sound — one that had devolved into bad metal with punk trappings, or “bad rock ‘n’ roll chivvied up a bit” — a much more important influence was Stoke-On-Trent’s finest Discharge. (Suicidal Tendencies also predate both DRI and Nuclear Assault.) In summary, it was obvious to anyone who cared to look that, by the mid-80s, the days of poodle rock’s domination over heavy metal would soon be over… ish.

The popular view of metalheads as mentally deficient goons was memorialized with the MTV cartoon Beavis and Butthead, about two teen metalheads who terrorize their pudgy neighbor Stewart, who wears a T-shirt of the glam rock band Winger.

Napalm Death was a product of Britain’s “Crass” [sic] movement, which fused anarchism and punk in the late 1980s. Vocalist Mark “Barney” Greenway, a vegetarian and peace advocate, is often pulled aside by fans who want to know more about his progressive views.

Well, kinda… but not really.

1) Crass were a band, not a movement.
2) The movement they inspired was anarcho-punk, not grindcore.
3) They formed in 1977 and split in 1984.
4) Napalm Death’s association with Crass stems from their appearance on one of the Crass record label‘s compilations: Bullshit Detector, Volume 3 (1984). (“The Crucifixion of Possessions” doesn’t sound much like ‘metal’ either.)

One recent song, “The Code is Red, Long Live the Code,” takes aim at the spate of terror alerts in America with lyrics like: “Switched on to subdue when the masses switch off.”

“It’s really, really difficult sometimes to break through the cloud of apathy, so it’s great when someone comes and asks why you are coming from your perspective,” Greenway said during a recent tour stop in California.

“When you come into a country like America, when you challenge thinking, it’s a great affront to some people,” he said.

The lyrics on Lamb of God‘s two most recent albums have been expressly political, and the politics lean heavily to the left.

After President Bush was re-elected in 2004, frontman Randy Blythe says he joked to a friend: “Well, there still may be some good music made. What’s bad for civilization is good for punk rock and metal.”

Napalm Death’s Greenway is considering work as a political activist when his metal days are over, but he doesn’t think metal will ever completely stray from hedonistic and supernatural themes.

“I appreciate that not everything has to be awareness raising or political,” he said. “Music is also a form of entertainment and it should remain that way. Variety is the spice of life. Escapism is a good thing if it doesn’t cloud your vision.” 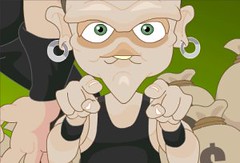 Finally, a know-nothing has written an article for — believe it or not — the IPA Review called ‘Liberalism, individualism and heavy metal’ (April 2006). In it, Dave Mustaine is quoted in defence of his property; Rock Against Bush is cited (as heavy metal!); the multi-millionaire Lars Ulrich is quoted (Some Kind of Monster is worth watching for the inspired animation of a greedy, grasping, whining Ulrich alone); and the article is rounded off with references to Rush, Twisted Sister, Stryper, Iron Maiden and Corporate Avenger.

Still, to the “small elite” what occasionally reads — but most often ignores — the Review, it probably sounds like the author knows what he’s talking about; the main point, in any case, being simply to confirm their ignorance, prejudice and stupidity.

I live in Melbourne, Australia. I like anarchy. I don't like nazis. I enjoy eating pizza and drinking beer. I barrack for the greatest football team on Earth: Collingwood Magpies. The 2021 premiership's a cakewalk for the good old Collingwood.
View all posts by @ndy →
This entry was posted in Music. Bookmark the permalink.