Y’know, when it comes to the response by some local Greek community leaders to the emergence of Golden Dawn in Melbourne, I’m honestly somewhat surprised. According to a number of anti-fascists who attended Greek independence day celebrations this year, for example, the fascist (neo-Nazi) party was welcomed by organisers, while those opposed to their presence were informed by state security to leave the event. As far as I can tell, this embrace of the anti-immigrant party by organisers has raised few questions subsequently (though it does evoke parallels with Pastor Danny Nalliah’s ‘multicultural’ party and its promotion of anti-multicultural policy) and would be a mildly disconcerting development if apathy towards and/or support for GD was replicated more widely among locals. In any case, Joolya has apparently declared that GD poses no particular problems as far as Australian authorities are concerned, meaning that those petitioning it so as to disallow the entry of its MPs and other leading figures to the country are going to be disappointed, and the struggle against GD’s influence in Melbourne and Australia generally assume different forms…

Speaking of which, next Saturday (April 6) there’s a benefit gig at The Reverence Hotel in Footscray. Performing are ExtinctExist, Faspeedelay, Go Genre Everything, Pope’s Assassins & Pretty City. The gig starts at 8pm, tickets cost $10 and proceeds goto Rocinante, a Greek anarcho-syndicalist group. 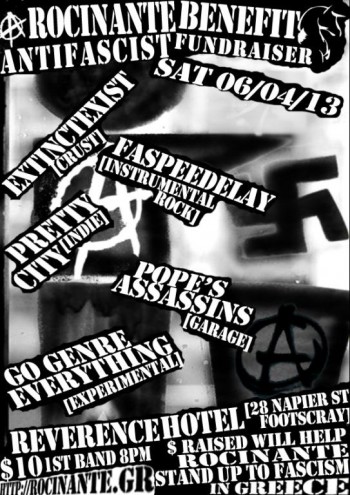 (Oh, and don’t forget A New World In Our Hearts, a benefit compilation by Iron Column Records, available for download with proceeds to Freedom Books.)

As for Golden Shower, you can read a recent scholarly account of their evolution in ‘The Rise of Golden Dawn: The New Face of the Far Right in Greece’, Antonis A. Ellinas, South European Society and Politics:

The article examines the rise of the one of the most extremist political parties in Europe, Golden Dawn. It sketches the historical trajectory of the Greek far right, examines the ideological, organisational and voter profile of Golden Dawn, and offers possible explanations for its breakthrough in the 2012 elections. The article shows how the economic crisis has brought a massive realignment of the Greek electorate away from mainstream parties, giving rise to anti-system and anti-immigrant sentiments. Golden Dawn’s violent tactics have allowed the party to establish an anti-system and anti-immigrant profile and capitalise on these sentiments. The party’s future will depend on its capacity to absorb organisationally any future tensions between party pragmatists and idealists.

See also this account of the party’s vigilantism — “The Golden Dawn were beating us with no mercy. It’s a miracle we are still alive” (March 27, 2013) — and some infos on the love affair between the party and their Italian counterparts in Golden Dawn and Italian neo-fascism: A Love story (March 25, 2013).

As a final aside, the fuehrer of the Australia First Party, GD’s comrades Down Under, has written a superbly entertaining account of how “a witches’ coven of radical lesbians” prevented him from coming to power in the 1980s. The batshittery [http://australiafirstparty.net/pitt-street-uniting-church-1980s-90s-deserves-investigation-by-royal-commission-into-institutional-paedophilia/] has been produced by the group’s Lebanese leader in order to exploit the Royal Commission into Institutional Responses to Child Sexual Abuse, which holds its first sitting next week (April 3). The bizarro antic echoes a previous threat to picket the coronial inquest into Tyler Cassidy’s death.

For the fourth year in a row, boneheads belonging to Blood & Honour Australia and the Southern Cross Hammerskins will be holding a gig (May 4) on the Gold Coast titled Hammered, and as usual, there have been gasps of horror in the corporate media, patient explanations from authorities that they can do nothing to stop the nazi shindig, and general wailing and gnashing of teef on the part of People Who Dislike Racism. For those who care, it was alleged last year that one of the principal organisers of the event is a guy called Brad Giles, a Hammerskin (a claim he publicly denies) and tattooist at Valley Ink.

For those of you arriving late, the Southern Cross Hammerskins are the Australian chapter of an international network of neo-Nazi skinheads established in the late 1980s. The Hammerskins’ most famous member is Wade Michael Page, who in August last year did his bit to oppose race-mixing and multiculturalism by shooting dead six Sikhs:

The Indian-American community in the small midwestern town [in Wisconsin] was in shock after the killings, and planned to hold a candlelight vigil later on Monday.

The dead were identified as Paramjit Kaur, a 41-year-old woman; and Sita Singh, 41; Ranjit Singh, 49; Satwant Singh Kaleka, 65; Prakash Singh, 39; and Suveg Singh, 84, all men. Singh is a common surname in the Sikh community.

The Indian embassy in Washington said it had been told that four of the six were Indian nationals, but did not respond to a request for more details.

The Washington-based Sikh Coalition said there had been “thousands” of incidents of hate crimes, discrimination and profiling against Sikhs since the September 11 attacks of 2001, attributing blame to anti-Muslim sentiment.

You can read more about the heroic Hammerskin in Wade Michael Page and the (Southern Cross) Hammerskins (August 15, 2012).

“We are urgently calling all anarchist, anti-fascist and other anti-authoritarian left wing groups to act in solidarity with Jock Palfreeman… Jock has already served several years of his 20 year sentence in Bulgaria. He actively works towards organising his fellow prisoners and highlights cases of repression by the prison authorities. He is one of the founders of the Bulgarian Prisoners Association. In the last few years, the response to his imprisonment and calls for solidarity with him from the anarchist and anti-fascist movement have been underwhelming. He needs more groups and individuals to join the campaign for his freedom. His family and some liberals have been organising support for him and trying to raise money for his fine; but Jock was always asking for a more direct kind of solidarity other than just politely asking the authorities to be nice. He needs people to not only constantly put pressure on the Bulgarian authorities in the form of letters and emails, but also organise demos and pickets outside embassies and/or any other Bulgarian institutions, generally spreading awareness about his case.

Please keep publishing information about Jock on your blogs, websites and social media. We hope you will all join the upcoming International Week of Solidarity with Jock Palfreeman on 22nd-28th April, and use your creativity and imagination to express solidarity.”

I live in Melbourne, Australia. I like anarchy. I don't like nazis. I enjoy eating pizza and drinking beer. I barrack for the greatest football team on Earth: Collingwood Magpies. The 2021 premiership's a cakewalk for the good old Collingwood.
View all posts by @ndy →
This entry was posted in Anti-fascism, Music, State / Politics and tagged antifa notes, Blood & Honour, Blood & Honour Australia, Brad Giles, Golden Dawn, Jock Palfreeman, Southern Cross Hammerskins, Valley Ink. Bookmark the permalink.