[Update : Account in English on Athens Indymedia here; The Greek Neo-Nazis of Golden Dawn – No Pasaran?, Interview with Dimitris Psarras, the author of the Greek “Black Book of Chrysi Avghi (Golden Dawn)”.] 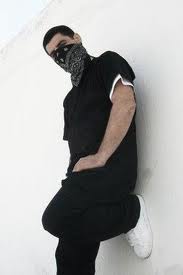 Late last night a group of 25 members of the Golden Dawn chased and murdered a thirty four year old man. He was watching a football match with his girlfriend at a cafe in Amfiali, a neighbourhood of Pireus when he was attacked. One of the assailants is described as a “known Golden Dawn associate”. One person who was holding a knife (the alleged murder weapon) was arrested by police, and according to information, admitted the crime, but there are more perpetrators. The victim was a locally known MC and an anti-fascist activist. There is a demonstration called on the spot where the murder took place, today at 18:00 local time.

Several months ago Golden Dawn opened an office in the Melbourne suburb of Oakleigh. 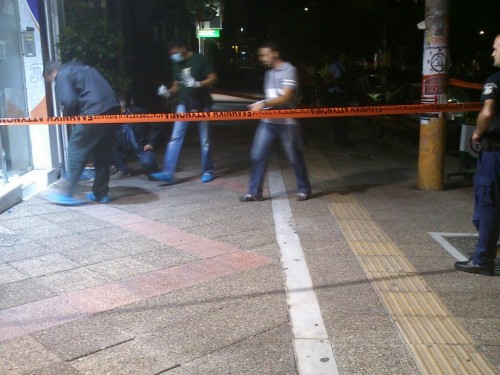 Note that in Australia the Australia First Party — which recently took part in the federal election — considers Golden Dawn to be kindred spirits. A former member of the Australian Nazi party, AF party leader Dr Jim Saleam was convicted of organising a shotgun assault upon the home of an ANC member in 1989 — he also has convictions for stealing, defacing walls, being in possession of a prohibited article and receiving and obtaining money by a false statement. The AF HQ in Tempe was also the scene of a murder when in 1991 Perry Whitehouse shot dead Wayne “Bovver” Smith.

The Australia First Party has welcomed the decision of the Greek Golden Dawn party to open an office in Melbourne.

While there are no official links between the two parties, there are clear parallels of ideology and politics.

“The priority of Golden Dawn is clearly to locate expatriates and others who have a deep concern both that the economic crisis of Greece can no longer be solved within the economics and politics of globalism, that relatives and friends are suffering from the recession brought on by a corrupt regime – and that the immigration crisis threatens the very make up of Greece itself.

But Australia First Party observes that the official political position of the ‘Greek community’ in Australia is liberal, globalist, multiculuralist and so forth. Golden Dawn’s presence will in our estimation, crack it open.

The Rise of Golden Dawn

The immigration question generally will do that. It is necessary that this occur both for Golden Dawn’s immediate purpose and for our own long term interest as Australian nationalists.”

A member of Australia First Party of Greek origin explained to Dr. Saleam “that Australia isn’t the Australia I came to and Greece isn’t the country I left.”

“Many of the older migrants I have come across in my political work have despaired as much of Greece’s immigration disaster as they have of Australia’s. Many have family grown on the soil of Australia and have felt lost amidst the multiculturalism here which is really a cover to divide Europeans from each other and from the native-Australian, whilst a policy to open Australia to the Third World was pursued. They feel their families here have been betrayed by the multiculturalists.”

“As Golden Dawn’s work develops amongst people of Greek origin here, it will fire them to do something for the old-country, but they will inevitably look at their new-country and its future. More amongst their native born families will this sentiment be found. Golden Dawn will contribute to masses of these people finding their way to the nationalism of the Australia First Party.”

I live in Melbourne, Australia. I like anarchy. I don't like nazis. I enjoy eating pizza and drinking beer. I barrack for the greatest football team on Earth: Collingwood Magpies. The 2021 premiership's a cakewalk for the good old Collingwood.
View all posts by @ndy →
This entry was posted in Anti-fascism, Death, Music and tagged Chrysi Avyi, Golden Dawn, Killah P, Pavlos Fyssas. Bookmark the permalink.