Against Golden Dawn & Australia First : counter-protest in Brisbane, Friday, May 2 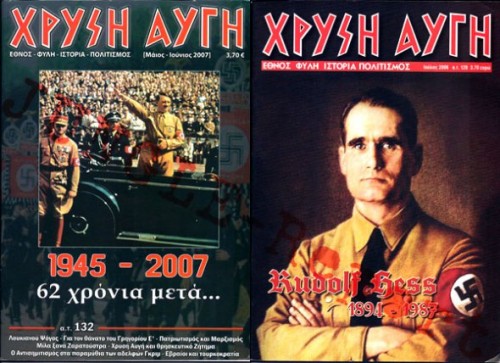 On Friday, May 2 members of the Brisbane branch of the Australia First Party (AF) have organised a march and rally with local supporters of the Greek neo-Nazi organisation Golden Dawn (GD). The fascists intend to assemble at The Greek Club (29 Edmondstone St, South Brisbane) for a rally at 11.30am and then march on the Greek consulate (Level 36, Central Plaza One, 345 Queen Street, Brisbane) to hold a picket between 1pm and 4pm in support of GD.

Having already held rallies in solidarity with GD in Sydney in December 2013 and February 2014, this is the first time that AF has publicly announced a protest of this sort prior to its occurrence. It therefore represents an opportunity to show AF, GD and the wider public that open expressions of support for racism, fascism and neo-Nazism will not be tolerated. (Note that AF previously attempted to disrupt the 2014 Invasion Day march in Brisbane.)

For more details on AF and their neo-Nazi cousins in GD see ‘False dawn: fascism in Greece and Australia’, overland, April 11, 2014.

Above : Dr Jim Saleam, leader of AF, now and in his yoof.

See also : When the State turns Antifa, cognord, October 26, 2013 | Antonis A Ellinas, ‘The Rise of the Golden Dawn: The New Face of the Far Right in Greece’.

I live in Melbourne, Australia. I like anarchy. I don't like nazis. I enjoy eating pizza and drinking beer. I barrack for the greatest football team on Earth: Collingwood Magpies. The 2023 premiership's a cakewalk for the good old Collingwood.
View all posts by @ndy →
This entry was posted in Anti-fascism and tagged Australia First Party, Chrysi Avyi, Golden Dawn. Bookmark the permalink.

4 Responses to Against Golden Dawn & Australia First : counter-protest in Brisbane, Friday, May 2