On Saturday April 4 the far right have organised a series of public rallies under the title of ‘Reclaim Australia’.

In Melbourne, organisers have elected to rally at the Shrine of Remembrance Federation Square.

A counter-rally has been organised under the title of ‘Rally Against Racism’.

The last time the far right attempted to rally in Melbourne was in May 2011. A strong counter-mobilisation ensured that the event was effectively disrupted. (A prior rally in April 2010 was also unsuccessful, being reduced to a handful of drunken boneheads shouting racist abuse.)

Please help promote the counter-rally among your networks. Muslim-hating may — with the assistance of segments of government and media — have become a national/ist sport, but there’s no need to allow mass public expressions of such hatred and contempt to go unchallenged. 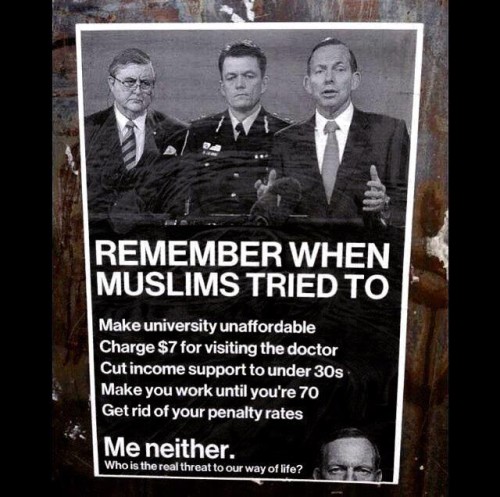 I live in Melbourne, Australia. I like anarchy. I don't like nazis. I enjoy eating pizza and drinking beer. I barrack for the greatest football team on Earth: Collingwood Magpies. The 2021 premiership's a cakewalk for the good old Collingwood.
View all posts by @ndy →
This entry was posted in Anti-fascism, State / Politics and tagged Anti-fascism, antifa, Islamophobia, Melbourne, Reclaim Australia, Shermon Burgess, The Great Aussie Patriot. Bookmark the permalink.