Reclaim Australia AKA “Muslims Out!”

The ‘Reclaim Australia’ rallies organised for April 4 will bring together a wide range of Islamophobic individuals and organisations. Below is a brief account of some of these.

The ‘Patriots Defence League’ (PDL) is an incorporated association registered in Queensland, though with branches/Facebook pages across the country (including Canberra). The PDL (Inc) actually began life as the ‘Australian Defence League’ (Inc) in January 2014, but changed its name in April to the PDL (for reasons presumably associated with the initial split between the ADL and the PDL). The PDL cheekily describes its principal activity as being ‘to raise awareness of women’s and children’s rights’. In reality, the PDL, like the ADL, is an Islamophobic organisation. 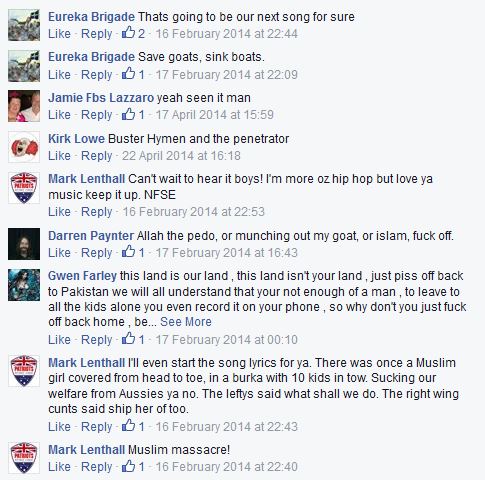 Note that Martin Fletcher, the Vice Chairman of the Sydney-based Party For Freedom (PFF), once made the video game ‘Muslim Massacre’ available on his website (the aim of the game is to kill all Muslims that appear on the screen). The PFF developed as a split from the Australian Protectionist Party — itself created as a split from the Australia First Party — in mid-2012, following the APP leadership’s rejection of the Sydney branch’s organisation of a public rally demanding that the Australian government ‘Torpedo the Boats’ carrying asylum seekers to Australia.

The PFF can reasonably expected to be a presence at the Reclaim rally in Sydney.

Reclaim Australia, as previously noted, is a campaign promoting anti-Muslim protests to take place on April 4. Its spearhead is Shermon Burgess (aka ‘The Great Aussie Patriot’ aka ‘Eureka Brigade’). Burgess has previously claimed to be a member of the ADL (and has the t-shirt to prove it) and while rejecting the notion that he is a racist or fascist, has also celebrated the deaths of asylum seekers at sea and encouraged a member of the Australian Navy, Jamie Patton, to murder asylum seekers arriving by boat — on the basis that they are ‘Muslim rapists and terrorists’. 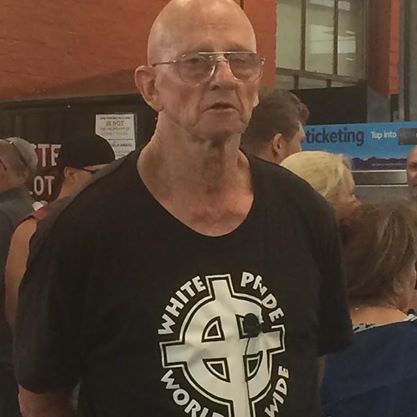 Burgess has further expressed support for the neo-Nazi group ‘Squadron 88’, encouraging his followers to attend their (rather dismal) anti-Muslim protest in Penrith a few weeks ago. Bizarrely, S88 has adopted as its mascot and spokesperson Ross ‘The Skull’ May (pictured above at S88’s protest in Penrith on January 23), an aging neo-Nazi activist. Burgess is also a fan of neo-Nazi muzak to boot:

In summary, anti-Muslim sentiment unites a variety of actors on the far right, and many look to it as fertile ground for recruitment and political consolidation.

1) The nice, middle-class Islamophobes of The Q Society are being sued:

Mohamed El-Mouelhy as sole director of the private company ‘Halal Certification Authority Pty Ltd’, has commenced legal proceedings against Q Society, Q member Kirralie Smith, myself and two other board members. We face defamation action in the Supreme Court of New South Wales.

Kirralie Smith known for her Halal Choices website, toured Australia as a guest presenter for Q Society in 2012. The successful tour and subsequent interest in halal certification resulted in a video production, which was uploaded to our YouTube channel in 2013, likewise one of Kirralie’s presentations at a 2014 Q Society event.

I am under legal advice not to divulge information about the case at this time. However, as informed citizens, I know you understand the significance of the court action and the implications for freedom of speech in Australia. Specialized legal counsel in New South Wales has instruction to jointly represent all defendants, including Kirralie.

I am calling for your help to contribute to the legal costs to defend the claims brought against us by Mohammed El-Mouehly. Please consider sending a donation, no matter how small to Q Society and spread the word among your connections.

It is vital that those who speak the truth about Islamic halal certification and other Islamic impositions are not silenced by time-consuming and expensive court action.

It’s important we work together on this critical issue and please remember: “There are no great men. Just great challenges which ordinary men, out of necessity, are forced by circumstances to meet.” – Admiral William Frederick Halsey, Jr. USN.

Thank you in anticipation,

2) On February 23, VTAC will be considering objections to the construction of a mosque in Bendigo. The principal group conducting the campaign is known as Rights for Bendigo Residents (Inc) and is seeking donations to pay lawyer Robert Balzola to represent it in court.

1 Response to Reclaim Australia AKA “Muslims Out!”