“Kill ’em all!” Muslim Massacre in the news… again

On the one hand…

The Australian Government is passing the buck on ‘Muslim Massacre’.

AUSTRALIAN Muslims are angry about an internet game in which players set out to “wipe out the Muslim race with an arsenal of the world’s most destructive weapons”. No one in the Australian Government seems able to do anything about it…

The game was created by a Brisbane man and was removed from his website after the initial complaints from Mr Trad about a month ago.

But it remained available on a Canadian website [that is, Domain Privacy Group, Inc., c/o muslimmassacre.com, 5160 Yonge St. Suite 1800, Toronto, ON M2N 6L9, CA, is the address given for the registrant — the IP location is the United States].

It is not clear, however, if there is anything the law can do to stop it reappearing in yet another corner of the internet.

In 2006, the Government was powerless to remove from the internet a racist board game based on the Cronulla riots. It was eventually removed by the US-based web host, Angelfire, following extensive lobbying by anti-racism groups.

Similarly, in 2007 a game based on the Virginia Tech massacre, developed by a Sydney man, was removed by its web hosting service after the Federal Government failed to come up with a way of using its powers to have the game blocked.

However, this sort of content could be blocked in future if the Government proceeds with its controversial plans for mandatory ISP-level filters of “illegal” material.

And on the other…

A Sydney-based Jewish businessman bankrolling a shoot-’em-up warfare game pitting Israeli troops against Iranians says the aim is to “throw out a challenge to Iran” after its President vowed to wipe Israel off the map.

But Kevin Bermeister, world renowned for being sued by the music industry in a multimillion-dollar lawsuit over the Kazaa file-sharing program, said his intention was also to take the war between Jews and Muslims out of the real world and into cyber space.

The online multiplayer game, Rising Eagle – Gaza, was officially released as a free download less than a week ago. It earns revenue through advertising billboards peppered throughout the game environment…

And on the third hand…

Muslim Massacre has been around for a while, its creator, Eric Vaughan (Brisbane), announcing its launch in June 2008. It came to the attention of the corporate/state media three months later, in September. Initially, Eric withdrew the game, and issued an apology. Subsequently, he changed his mind, and republished it. Since then, the game has been republished elsewhere, including two sites hosted by local neo-Nazis: Martin Fletcher (Sydney) of the Australian Protectionist Party on his Downunder Newslinks site, and Colin Campbell (Adelaide), a Creator (a member of a tiny white supremacist religious cult).

In addition to being a webmaster for the APP — which is currently seeking to bring British Nationalist Party leader Nick Griffin to Australia next month — Martin is also responsible for distributing online the “racist board game based on the Cronulla riots” (otherwise known as Cronulla 2230), Holocaust denial and other anti-Semitic literature, and the cartoons produced by Tom Metzger’s ‘White Aryan Resistance’ (even earning Tom’s praise for doing so). Here’s an example of Martin/WAR’s humourous take on racial politics: 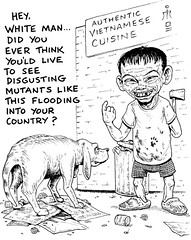 In October 1990, the SPLC won $12.5 million in damages against Tom Metzger and WAR when a Portland, Oregon, jury held the neo-Nazi group liable in the beating death of an Ethiopian immigrant (Mulegeta Seraw; see Anti-fascist organizing in Portland 1988-1993, October 12, 2007 for more details). Terrible Tom was also implicated in an earlier crime when, in 1988, five members of the original ‘Confederate’ Hammerskins in Dallas — Christopher Greer, 23, John Jordan, 17, Michael Lawrence, 20, Sean Tarrant, 18 and Daniel Wood, 18 — “chased and attacked minorities who attempted to enter Robert E. Lee Park in downtown Dallas. The five were apparently inspired by a racist rally they attended in Tulsa that June where Tom Metzger, leader of White Aryan Resistance (WAR) spoke. When they were arrested, the defendants had baseball bats and broken pieces of concrete, which they apparently intended to use to recreate the Kristallnacht to commemorate the 50th anniversary of the attacks on Jewish stores and homes that took place on November 9, 1938 in Nazi Germany”. The five were sentenced for the crime in April, 1990.

The Hammerskins are active in Australia, and help to organise (along with the local Blood & Honour franchise) a yearly gig in Melbourne. In addition, Newcastle band Blood Red Eagle (led by the diminutive warbler of Viking songs Douglas Schott) are proud to be considered part of the Hammerskin Nation, and have even played Portland (October 2007) and New Zealand (April 2007). See Pride, Strength & Honour : Kiwi bonehead on trial for murder (October 16, 2008) for evidence of what boneheads consider to be their duty in their RAcial HOly WAr. 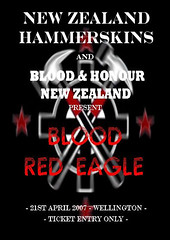 I live in Melbourne, Australia. I like anarchy. I don't like nazis. I enjoy eating pizza and drinking beer. I barrack for the greatest football team on Earth: Collingwood Magpies. The 2021 premiership's a cakewalk for the good old Collingwood.
View all posts by @ndy →
This entry was posted in !nataS, Media. Bookmark the permalink.

2 Responses to “Kill ’em all!” Muslim Massacre in the news… again