New Zealand Flag Day, 2009 : “…against the delusions of our European Culture and pride”

Uh-oh spagetti-o: New Zealand Flag Day is in October and this year, like last year, Kiwi nutzis will be assembling en masse to rally ’round the flag.

The New Zealand Flag is the symbol of the realm government and people of New Zealand. Its royal blue background is reminiscent of the blue sea and clear sky surrounding us. The stars of the Southern Cross emphasise this country’s location in the South Pacific Ocean. The Union Flag gives recognition to our historical foundations and the fact that New Zealand was once a British colony and dominion.

The New Zealand Flag may be flown on any day of the year. It is particularly appropriate to fly it on days of national commemoration, such as Anzac Day, and on other important occasions.

As New Zealand’s national symbol the New Zealand Flag should be treated in a manner worthy of its high status. The Flags, Emblems, and Names Protection Act 1981, administered by the Ministry for Culture and Heritage, defines and protects the Flag. Contained in the Act is the power to prosecute those who misuse it. 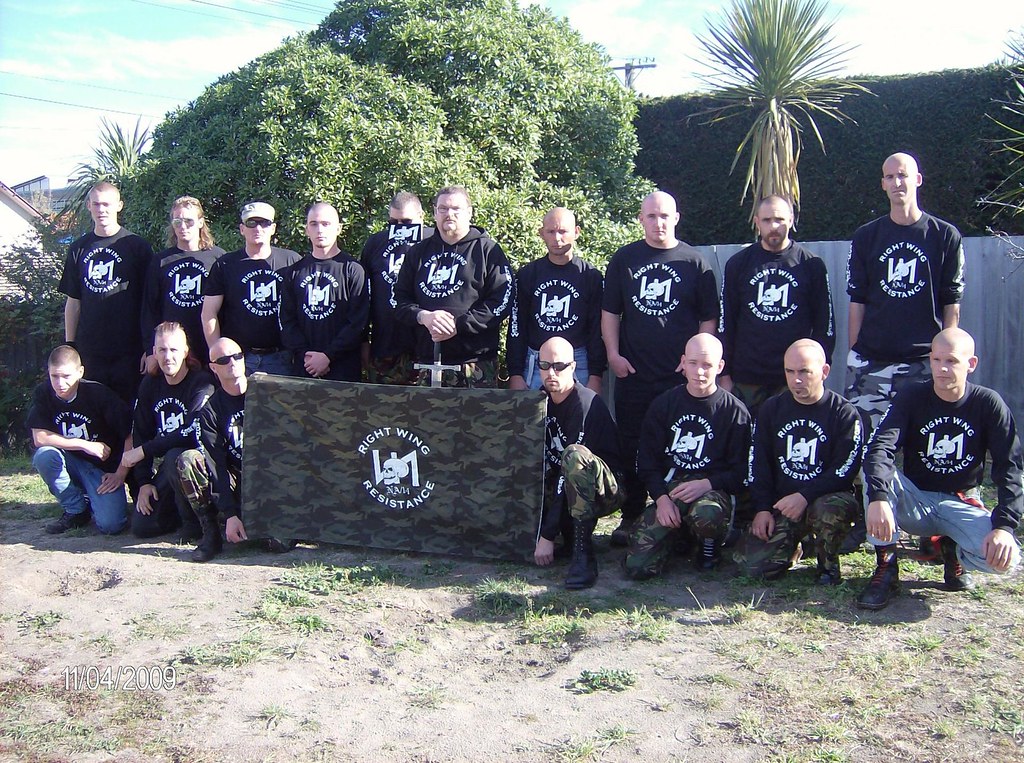 We want to work on Unity in this country. We are going to be up against a large Anti counter protest year at the Flag Day. Anti Websites seem to be getting active again and our infiltrators have told us that they are strengthening again after the terrorist arrests that they were going through last year. We are up against a hardened Left Wing and Anarchist Alliance now that may take things further. We must be ready for this. We must stand together in Unity and Pride. Victory only comes to those who plan and work in an organised and productive manner. We ask you all to support this cause. Please send us donations and any other help you can give. We need a good turn out at Flag Day and other demonstrations.

‘RWRNZ’ (‘Right Wing Resistance New Zealand’) is the latest brainchild of Kyle ‘The Mormon’ Chapman, and credit where credit is due: the YouTube video documenting their initiation ceremony is totally awesome, and scores 88 on The Bizarro Scale, a rating achieved by way of the fact that: the ceremony looks like it’s taking place in someone’s back shed; the use of cheesy props (a sword by The Pieman); and last, but not least, the fact that the assembled racist bozos vow to stand strong “against the delusions of our European Culture and pride”.

Note that Kyle, the führer of RWRNZ, declared only last month that he had put his wicked ways behind him, exchanging his love of racist ratbaggery and The White Man for the love of God and his wife: see : nutzis are W E I R D : Kyle Chapman. The Mormon. (May 3, 2009). 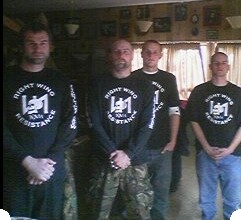 CHICAGO (AP) — A white supremacist blogger was arrested at his New Jersey home Wednesday and charged with threatening to assault or murder three Chicago-based judges who refused to overturn local ordinances banning handguns. Hal Turner, 47, a former Internet radio talk show host, was taken into custody by FBI agents who went to his North Bergen home with a search warrant, according to the U.S. attorney’s office. Prosecutors quoted a Turner Internet posting as saying: “Let me be the first to say this plainly: These judges deserve to be killed…”

I live in Melbourne, Australia. I like anarchy. I don't like nazis. I enjoy eating pizza and drinking beer. I barrack for the greatest football team on Earth: Collingwood Magpies. The 2021 premiership's a cakewalk for the good old Collingwood.
View all posts by @ndy →
This entry was posted in Anti-fascism, State / Politics and tagged Kyle Chapman, New Zealand Flag Day, Right Wing Resistance New Zealand. Bookmark the permalink.

5 Responses to New Zealand Flag Day, 2009 : “…against the delusions of our European Culture and pride”