‘All work and no pay may be immoral but it’s legal, company says’
Dan Silkstone
The Age
September 8, 2006

THEY worked all week and will be paid nothing. Their union says it is unprecedented, the workers say it is immoral. But under Australia’s workplace laws it appears to be legal.

Mulgrave company Heinemann Electrics is refusing to pay 54 workers for five days of work last month because they placed a ban on working overtime during that period as part of an industrial campaign for a new enterprise bargaining agreement.

Despite working 38 hours between August 22 and August 28, all of the workers have been told they will not be paid because of a decade-old provision in Australian workplace law that, the company says, prohibits employers from paying workers during industrial action.

Before taking the action, Heinemann received legal advice from Freehills — a key architect of the HoWARd Government’s new industrial relations legislation. Heinemann said yesterday it had no choice but to refuse to pay or it would be in breach of the Workplace Relations Act.

But ACTU President Sharan Burrow said the action was a “monstrous interpretation” of the law. “These men have worked for five days for no pay,” she said. “Does the Workplace Relations Minister Kevin Andrews think that this is fair?”

[Is that a rhetorical question Sharan?]

A similar question was put to Prime Minister John HoWARd in question time yesterday by the Opposition [sic]. “If you work for 40 hours and there are no countervailing circumstances, of course you should get paid,” he said.

Partial work bans have long been used as a moderate tactic in disputes. But Electrical Trades Union secretary Dean Mighell said the company’s action would have a big effect on union tactics.

He said the new interpretation would leave workers no alternative but to stop work entirely, a move the Mulgrave workers took yesterday. “Total warfare or nothing,” he said. “That’s where Australian industrial relations is now at, tragically.”

The workers’ overtime ban had been approved by the Industrial Relations Commission and was considered a legal action under the WorkChoices legislation. Overtime was not compulsory at the factory.

Heinemann general manager Richard Ross said the company had acted appropriately: “We had to look at it and apply the law in the correct way,” he said. “That’s what we did, it’s nothing more than that.” Asked if it was immoral to accept workers’ labour and refuse to pay for it, he said: “Is there a moral requirement for me to break the law?”

Mr Andrews said the matter would be investigated by the Office of Workplace Services to see if the company had acted properly. The dispute relates to a new enterprise bargaining agreement, under which the company wants an arrangement where staff work an average 38-hour week over a month. Workers could be required to work 20 hours one week and 60 the next. 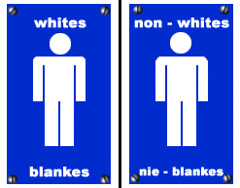 South African company Circuit Breaker Industries took over Heinemann two years ago and has since received repeated warnings from WorkSafe for bullying workers.

Nalin Nawagamuwage has assembled circuit boards at the factory for 13 years and said the new owners had been a nightmare. “They are really arrogant and grumpy … The water cooler is broken so we ask for it to be replaced, they just took it away … Everyone working here has been very stressed.”

Heinemann Electrics sounds like the kinda place that would welcome neo-fucking-Nazis in its ranks!