July 25, 2017 is the third ‘International Day of Solidarity with Antifascist Prisoners’. NYC Antifa:

As the third annual July 25th International Day of Solidarity with Antifascist Prisoners approaches, we find ourselves fighting the hydra of fascism and far-right ideology. While its many heads have distinct looks in different parts of the world, this beast spews the same venomous poison of nationalism and bigotry everywhere. It demonizes refugees and immigrants, stokes hatred for Muslims, and attacks LGBTQ and other oppressed groups who are fighting for liberation and their very lives.

The July 25 International Day of Solidarity with Antifascist Prisoners originated in 2014 as the Day of Solidarity with Jock Palfreeman, an Australian man serving a 20-year sentence in Bulgaria for defending two Romani men being attacked by fascist football hooligans. Whether acting as individuals or as part of larger organized demonstrations, this is the kind of bravery and solidarity which defines antifascist actions against the forces of hate. Since the day of solidarity last year, we have seen this spirit all over the world—in Indonesia, Czech Republic, Brazil, Poland, England, Greece, the United States, France, Syria, Australia, Japan and all points in between.

Read more in English here; you can read translations of the call out im Deutschen, ελληνικά, français, Bahasa Indonesia and other languages here.

The Antifascists is a new Swedish/Greek documentary ‘that takes us behind the masks of the militant groups called antifascists’.

It will hopefully be screening in Australia later in the year.

Or: Bring all the crew mate it’s gonna be YUGE. Possibly the biggest Sydney has seen for this type of protest march. 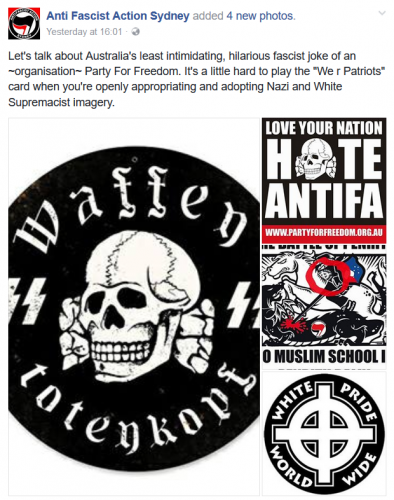 On Saturday, July 1, Nick Folkes and the ‘Party for Freedom’ held a small rally in Newtown in order to whinge about ‘anti-fascists’. About 20-30 or so individuals attended the event, which consisted of marching the brief distance from Newtown railway station (chanting the usual inanities), then gathering outside Sergio Redegalli’s former studio (for more chanting), then standing around for an hour as puzzled locals went about their business. Peter Grace:

Apart from All The Usual Suspects, among those who bothered to rock up was Mark McDonald, the former leader of the short-lived neo-Nazi groupuscule ‘Squadron 88’. His presence was more welcome on Saturday than it was in July 2015, when he and geriatric bonehead Ross ‘The Skull’ May were kicked off the ‘patriot’ bus from Sydney to Melbourne for being ‘Nazis’. Among those who turned on the pair was Shermon ‘The Great Aussie Patriot’ Burgess who, since being kicked off Facebook, has now embraced, inter alia, Adolf Hitler and Flat Earthism. Still, the neo-Nazi pinhead was also presumably heartened by the PFF’s recent adoption of the ‘White GeNOcide’ meme, ably embodied by Folkes’ own marriage to an Asian woman (with whom he apparently has children) and the mixed-up confusion that is his young sidekick Toby Cook (below), whose commitment to White nationalism is unimpeded by his own non-European ancestry. 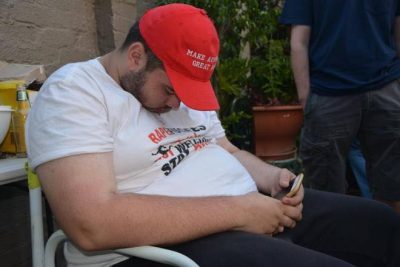 As noted previously, over the course of 2017 a number of fake ‘antifa’ social media accounts have emerged. Useful for conning the uninitiated, ignorant and naive, they’re also xclnt for spoonfeeding journalists drivel (cf. Andrew Bolt @ News and Michael Koziol @ Fairfax). In the United States, sadly, the fakery has resulted in one racist meathead shooting himself in the leg! Fake Event Mobilizes far-Right at Gettysburg; Militia Member Shoots Himself in Leg, It’s Going Down, July 1, 2017:

In the last two weeks, Alt-Right trolls have attempted to replay the events in Houston, Texas in June, where using over the top threats from fake antifa groups on social media, they galvanized a ‘counter-protest’ from the militia movement.

Moreover, it turned out that the people behind the trolling where also raking in thousands of dollars off of crowdfunding for the ‘counter-demonstration’ which drew several hundred and led to infighting between militia members and neo-Nazis. Seems like the Right has a business plan! Make a fake antifa group, make over the top threats, and then crowd fund money off of people that want to protest it.

This time around, trolls using the page ‘Harrisburg Antifa’ alleged that antifascists would burn flags and urinate on the graves of Confederate soldiers. These outright lies were then picked up by the ‘journalists’ at Fox News and distributed as actual truth. This connection between Alt-Right trolls and Fox News is not new; just last week Fox reprinted an article written by a member of the Alt-Right who wrote a hit piece about IGD at HeatSt.com.

Interestingly enough however, in the lead up to the protest, Navy Jack, a mover and shaker within the far-Right Oath Keeper militia, called out the event as total make-believe in a tweet (see image on the top-right), which has since been deleted. Navy Jack also included the photos of the two people he believed were behind the fake event and called it #FakeNews.

Other members of the far-Right, such as Joe Biggs, who recently left InfoWars because of the #Pizzagate conspiracy, have stated publicly that the rise of such fake antifa accounts have hurt the far-Right who continues to take them seriously.

See also : He came to rally against a non-existent protest. Then he shot himself in the leg., Greg Hadley, The Sacramento Bee, July 2, 2017 | Antifa calls Gettysburg protest rumors ‘a complete fabrication’, Dustin B Levy, USA Today, June 30, 2017.

In Melbourne on the weekend a dozen or so members of private security company Asolate Security, in conjunction with various self-described ‘patriots’ from the Soldiers of Odin and a handful of other groupuscules, conducted brief forays into Southbank, apparently in order to stop African yoof from stealing Moomba showbags. Or something. The meatheads are active online as ‘A26A’.

See also : We must draw attention to the far right. Not to do so is a dangerous concession, Jason Wilson, The Guardian, June 29, 2017.