After a minor roadbump (seemingly generated by their applying for the wrogn category of visa), Stefan Molyneux and Lauren Southern were this week issued working visas in order to conduct their speaking tour of Australia. See : ‘It’s OK to be white’: Anti-immigration activist Lauren Southern in Australia, SBS, July 13, 2018.

In any case, the hate-speech tour kicks off in Cairns on Monday, July 16 when Molyneux and Southern will be joined by tour organisers Dave Pellowe and Luke Izaak (Axiomatic Events), Lyle Shelton and Dr Peter Ridd.

The July 16 event is being auspiced by the ‘Young Conservatives North Queensland’, a yoof project of Cory Bernardi’s Conservatives party (‘Young Conservatives is the Anti-PC movement aiming to convince young Australians to become interested in Aussie politics and conservative values in NQ’) which operates under the wing of Tory yoof Ryan Hasson. You may remember Ryan from such websites as ‘Australian Majority’. See also : Senator Cory Bernardi’s conservative movement shares $1 million headquarters, Deborah Snow, The Sydney Morning Herald, August 12, 2016. 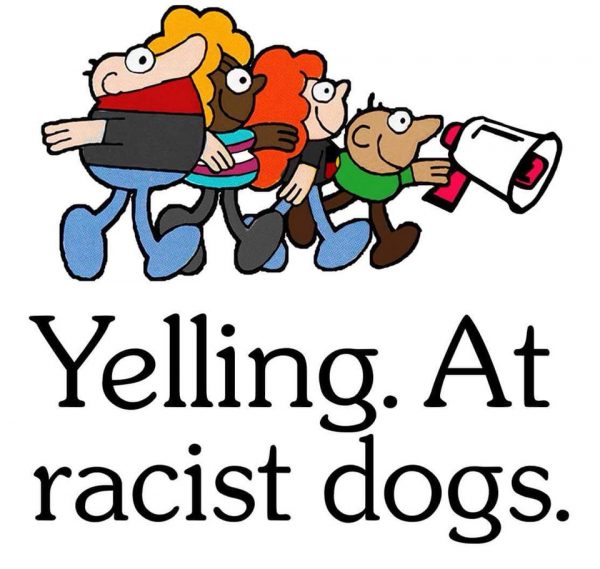 img via Yelling At Racist Dogs

** The hate-speech tour was scheduled to touch down in Auckland on August 3 but it’s unclear if the event will be going ahead at this stage following the cancellation of a venue booking by Auckland Council. See : Controversial Canadian speaker denied visa as Auckland agency cancels booking, Todd Niall, stuff dot so dot nz, July 6, 2018. Unsurprisingly, news of the cancellation triggered a racist backlash, which among other things resulted in the NZ Greens co-leader Marama Davidson receiving the usual barrage of death and rape threats. See : Greens co-leader Marama Davidson receives violent threats on social media, Debrin Foxcroft, stuff dot co dot nz, July 8, 2018.

• Last weekend, the Melbourne Arms and Militaria Fair was held in Altona North. As usual, the Fair was used to distribute Nazi tatt:

REPLICA Nazi flags, uniforms, badges and pins were for sale at a gun show in Melbourne’s south west today.

Gas masks and miniature Nazi model sets were also available to the thousands that visited the Melbourne Arms and Militaria Fair in Altona North.

Executive Council of Australian Jewry researcher Julie Nathan said the sale of such products was unacceptable.

“It is appalling that some people are willing to profit from the collection or sale of Nazi and Holocaust memorabilia,” she told the Sunday Herald Sun.

“Any Nazi memorabilia being sold in Australia is an insult to the millions who suffered and died under Nazi brutality and genocide.

“It is especially problematic at a time of rising antisemitism from the far right.”

The researcher said 230 antisemetic [sic] incidents were recorded in Australia last year and more than more than 50 were perpetrated by a Melbourne-born neo-Nazi group called Antipodean Resistance.

Event organiser Jeff Pannan said not everyone could afford genuine articles and replicas provided an alternative to collectors.

“If they can’t afford the real thing, then there are reproductions and that’s fairly common,” he said.

Mr Pannan said the world was in the “grips of too much ‘do-gooderism’” and that people have the right to sell whatever they wanted.

“Whether people think it’s good or bad, I think people have the right to do it”

At the same event earlier in the year, the Herald Sun uncovered replica Zyklon B gas canisters for sale.

“I would not be surprised if neo-Nazis, Holocaust deniers and white-supremacists are buying such items as a way to celebrate their dangerous ideology and to recruit new members,” he said.

“I call on all dealers to start exercising moral judgment by stopping the sale of these perverse articles.

“Perhaps it’s time that the state and federal governments consider regulating and controlling this reprehensible practice.”

• As noted previously, Cooked Convict Neil Erikson has been charged over his disruption of a church service in Gosford in May. To celebrate his court date, the methgoblins of the True Blue Crew in NSW have promised to kick up a stink at Erikson’s court hearing on September 11.

• Fuehrer of the Australia First Party, Dr Jim Saleam, has thrown his hat into the ring for the federal seat of Longman in Queensland. The various preference deals undertaken by the other parties for the July 28 by-election have generated some reportage, wailing, and gnashing of teef, but it remains unclear at this stage who will beat Saleam into the category of least-favourite candidate.

A [bonehead] who set a church on fire and made anti-Semitic threats of extreme violence and sexual assault has been placed on an interim NSW supervision order.

The State of NSW sought the Supreme Court order against Ricky White, whom Justice Monika Schmidt said admitted having a longstanding history of involvement with white supremacist groups.

The 27-year-old is on parole for setting alight a church at Taree, in northern NSW, causing an estimated $200,000 damage, after which he sent pictures of a burning church with inverted crucifixes to friends.

The 28-day interim order, which White agreed to after disputing only a small number of the conditions, was made by Justice Schmidt on Wednesday under the Terrorism (High Risk Offenders) Act …

• At the start of July, some naughty students at Charles Sturt University were disciplined after taking part in an event to celebrate their opposition to ‘political correctness’ by dressing up ‘as members of the Ku Klux Klan and in blackface as a “cotton-picking” slave’ (see : Australian students who dressed as KKK forced to complete Indigenous subject, Michael McGowan, The Guardian, July 2, 2018). Note that the freedom-loving students also dressed up as Jewish concentration camp inmates and a Nazi guard, although oddly this is not referenced in the article.

• In Germany, the trial of neo-Nazi Beate Zschäpe has ended with her conviction for her involvement in the multiple murders conducted by her group the ‘National Socialist Underground’ during the years 2000–2007, a period in which the NSU operated under the protection of German secret police in the BfV. Zschäpe was sentenced to life imprisonment. For useful background on the case, see : NSU Watch’s article ‘The NSU Case in Germany – as at July 3rd, 2018’.

• In the US, A.C. Thompson and Ali Winston write that There likely isn’t such a thing as a “typical” violent white extremist in America in 2018. Still, Michael Miselis — a University of California, Los Angeles doctoral student with a U.S. government security clearance to work on sensitive research for a prominent defense contractor — makes for a pretty unusual case … (He Is a Member of a Violent White Supremacist Group. So Why Is He Working for a Defense Contractor With a Security Clearance?, ProPublica, July 5, 2018).

Whether this proposition is true or not, the case of Miselis naturally brought to mind the case of Nicole ‘BlueEyedBlonde’ Hanley, the Canberra-based neo-Nazi who worked for Thales, the French corporation. See : Nicole Hanley : For Blood & Honour (April 6, 2009).

In Portland, June 30 witnessed bloody clashes between fascists (including many Proud Boys gathered under the umbrella of ‘Patriot Prayer’) and anti-fascists. See : Riot in Portland as far-right marchers clash with anti-fascists, Jason Wilson, The Guardian, July 1, 2018 & Portland Holds It Down against Fascists and Police: The Clashes of June 30, 2018, CrimethInc, July 1, 2018. See also : Rose City Antifa.

Obviously under some pressure from anTEEfa and worried about protecting the AltRight, neo-Nazis and white supremacists, US Republicans have introduced legislation — viz, the ‘Unmasking Antifa Bill’ — intended to further criminalise the movement. See : Republican Congressmen Are Pushing Anti-Antifa Bill, Kelly Weill, The Daily Beast, July 7, 2018.

Washington, meanwhile, is gearing up for ‘Unite The Reich 2.0’, as Jason Kessler continues on his merry racist way. See : A Year Later, the Fascists of Charlottesville Are Back for More — This Time Outside the White House, Natasha Lennard, The Intercept, July 3, 2018. 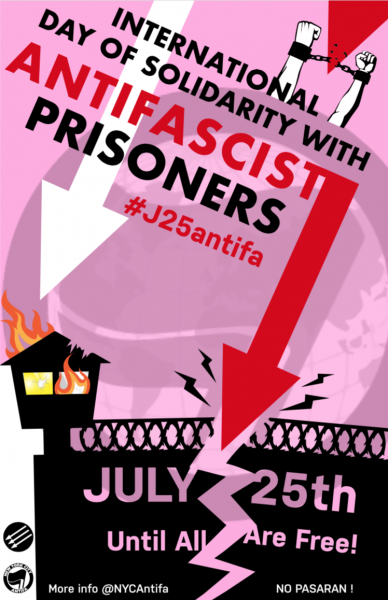 In the UK, Ayoola Solarin explores Fighting Fascism at the UK’s Feminist Antifa Martial Arts Gym (VICE, July 10, 2018), and July 25 is, of course, the (Fourth Annual) International Day of Solidarity with Antifascist Prisoners.