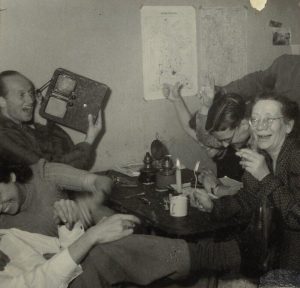 A brief, incomplete survey of some relevant podcasts (to which I’ll add more stuff):

• 12 Rules For What ‘A podcast about fascists, nazis, and the far right, from the perspective of the left.’

• Behind the Bastards ‘dives in past the Cliffs Notes of the worst humans in history and exposes the bizarre realities of their lives. Listeners will learn about the young adult novels that helped Hitler form his monstrous ideology, the founder of Blackwater’s insane quest to build his own Air Force, the bizarre lives of the sons and daughters of dictators and Saddam Hussein’s side career as a trashy romance novelist.’

• Conspirituality Podcast attempts to bring understanding to the relationship between conspiracy and spirituality. ‘A journalist, a cult researcher, and a philosophical skeptic discuss the stories, cognitive dissonances, and cultic dynamics tearing through the yoga, wellness, and new spirituality worlds. Mainstream outlets have noticed the problem. We crowd-source, research, analyze, and dream answers to it.’

• Democracy in Danger is a podcast by Will Hitchcock, a professor of history, and media studies scholar Siva Vaidhyanathan. It explores anti-democratic ideas and movements and their implications for the United States and elsewhere in the world. ‘Taking a view that’s both historical and contemporary, Will and Siva talk to experts about the resurgence of authoritarianism, what it all means, and what might be done about it — not only to save democracy for posterity but to make it work better.’

• The Empire Never Ended Another entry in The Department of So-Bloody-Late-Capitalism, The Empire Never Ended is an ‘Antifascist Amerikanski-Balkan podcast about (neo) fascist terror, the (deep) state and the alienation, nihilism and desperation produced by the capitalist system. And how to get rid of all that. Something like that…’.

• Fifteen Minutes of Fascism is ‘a weekly news analysis and historical background podcast covering the global rise of the right-wing. New episodes every Friday.’

• Hope Not Hate ‘Riding the podcast wave, the HOPE not hate team have launched their own to bring you the latest news about the far right in Britain and further afield, as well as astute analysis about racism, radicalisation and integration.’

• I Don’t Speak German is a podcast about the far right hosted by Daniel Harper and Jack Graham.

• It’s Going Down ‘Looking for hard-hitting analysis on the growing crisis? Searching for a revolutionary anarchist, anti-fascist, and autonomous anti-capitalist alternative to the far-Right and the neo-liberal center?’

• Know Your Enemy is ‘A leftist’s guide to the conservative movement’ hosted by Matthew Sitman and Sam Adler-Bell and sponsored by Dissent Magazine.

• Radikaal is a podcast by Cas Mudde which ‘combines my three personal and professional interests: politics, music & sports. More specifically, it focuses on the radical aspects of music, politics & sports. In short: RADIKAAL is a podcast about fascists, punks & ultras.’

• The Loopcast is a ‘podcast series covering various topics in security and technology’ of relevance to the study of fascism and the far-right.

• Q Anon Anonymous A vital podcast on the Very Stable bRanes geni0use Idea that is Qwhite entertaining, as it ‘chops & screws the best conspiracy theories of the post-truth era’.

• Right Rising ‘Right-wing authoritarian and extremist movements are on the march worldwide. This podcast will host some of the globe’s leading experts on the radical right to help us understand the development of these extremists. Each episode, hosts and guests bring their specialist insights to break down the critical people, places, organizations, actions, and ideas of the radical right. Produced by the Centre for Analysis of the Radical Right.’

• Surviving Society ‘We started recording the podcast after feeling disenfranchised by the way the British news media were reporting on the impacts of austerity, the rise of the far right, the Grenfell murders, Brexit and Trump. We wanted to communicate how sociology students, scholars and community workers could help us challenge and come to terms with what can at times feel like an urgent political moment.’

• This Podcast Has Been Declared a Riot ‘NPR but the N is for No Gods, No Masters’. A podcast mostly about antifascist activism (centred around Portland).

• The Women’s War ‘Robert Evans went looking for hope. He found it in the unlikeliest of places: Northeast Syria, in a region known as Rojava that’s become host to a feminist, anti-authoritarian revolution.’

• Working Class History What it says on the tin. Includes episodes dedicated to exploring the history of anti-fascist youth movements in Nazi-occupied Europe, Anti-Racist Action in the United States, the Spanish Civil War, the Portuguese Revolution and so on.

• Yeah Nah Pasaran! is a podcast I do with Cam Smith for Melbourne community radio station 3CR.

The War on Everyone is a six-part audiobook by Robert Evans which provides a history of fascism concentrating on the United States. Britain’s Fascist Thread is a three-part BBC documentary by historian Camilla Schofield which ‘explores the unbroken thread of fascism in Britain’.

I live in Melbourne, Australia. I like anarchy. I don't like nazis. I enjoy eating pizza and drinking beer. I barrack for the greatest football team on Earth: Collingwood Magpies. The 2021 premiership's a cakewalk for the good old Collingwood.
View all posts by @ndy →
This entry was posted in Anti-fascism, History, Media, State / Politics, That's Capitalism!, War on Terror and tagged 12 Rules For What, Behind the Bastards, Britain's Fascist Thread, Conspirituality, Democracy in Danger, Fifteen Minutes of Fascism, Hope Not Hate, I Don’t Speak German, It's Going Down, Know Your Enemy, Millennials Are Killing Capitalism, Q Anon Anonymous, Radikaal, Right Rising, Southpaw: Radicalizing Politics and Combat Sports, Surviving Society, The Empire Never Ended, The Loopcast, The War on Everyone, The Women's War, This Podcast Has Been Declared a Riot, Working Class History, Yeah Nah Pasaran. Bookmark the permalink.